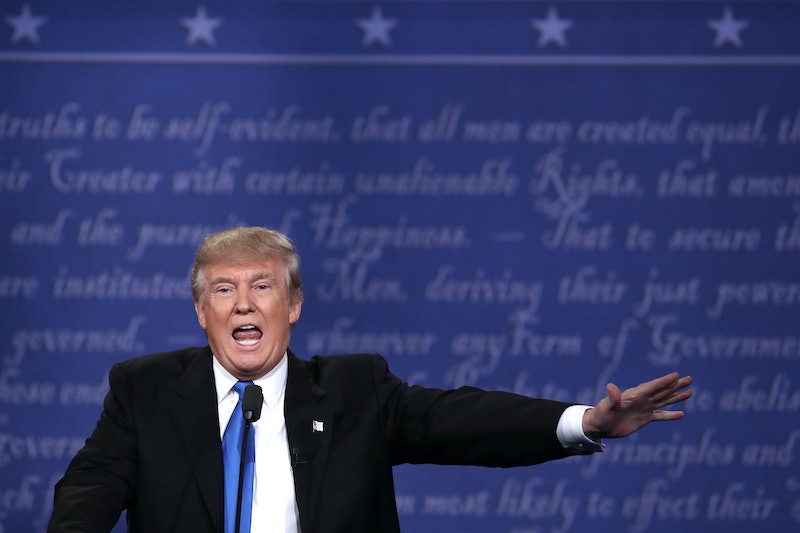 As Americans head to malls and online markets this holiday season, many may be concerned about purchases that accidentally help Donald Trump's businesses profit, directly or indirectly. With such a vast array of businesses interlocked with Trump in some way, keeping up with all of them is an impossible feat for any one person. But the good news for conscientious shoppers? BoycottTrump is your app for that.

Free to download, BoycottTrump was designed by the Democratic Coalition Against Trump (DCAT), a group formed during the general election campaign. Its original mission was to ensure that "Donald Trump never became president." But since that ship has sailed, the organization is pivoting to become more of a watchdog group, dedicated to holding the White House and Republicans accountable for their policies. To that end, DCAT has "chairs in all 50 states," and a separate group called Artists Against Trump, which includes a number of entertainment professionals who oppose the new president-elect. Not too shabby for an organization that's less than a year old. With more than 160,000 Facebook likes and the successful launch of BoycottTrump, DCAT is well poised to be a go-to source for anyone who is interested in keeping a Trump administration in check.

Nate Lerner, the Executive Director of DCAT, replied in an email that his organization "did not anticipate such a high level of success so quickly." On Monday alone, the app was downloaded 28,000 times, which made it the 5th most downloaded iOS app (just behind major names like Tinder and Zillow). As Lerner went on to rightfully point out, "Its success is absolutely unprecedented for a political action app." Given its remarkable popularity, the app will now "play a much more significant role in our larger Boycott Trump movement."

Having downloaded the app myself, I was surprised at the sheer number of businesses that have ties to Trump. Over 200 are currently listed, and the names are likely to disappoint a lot of consumers. For instance, Walt Disney is a "Sponsor of Celebrity Apprentice." That's right, the happy land of Magic Kingdoms and Mickey Mouse is tangentially linked to the reality TV show that helped make Donald Trump the household name he is today. Why, world?

And that's a fair warning to all downloaders. Commitment to boycotting Trump may mean boycotting some things you love, from Nike to Amazon. In fact, that last one was a stunner, given Trump's vocal takedowns of Amazon founder, Jeff Bezos. Not to mention the way Bezos-owned newspaper The Washington Post deemed it imperative, like DCAT, to stop Trump from becoming president. If I've learned anything from perusing the BoycottTrump app, it's that in the world of billionaire business people, the personal and the profit-producing do appear to be kept very separate indeed.

But for consumers who think the best place to protest Trump is through his proverbial wallet, BoycottTrump is a holiday gift in and of itself.