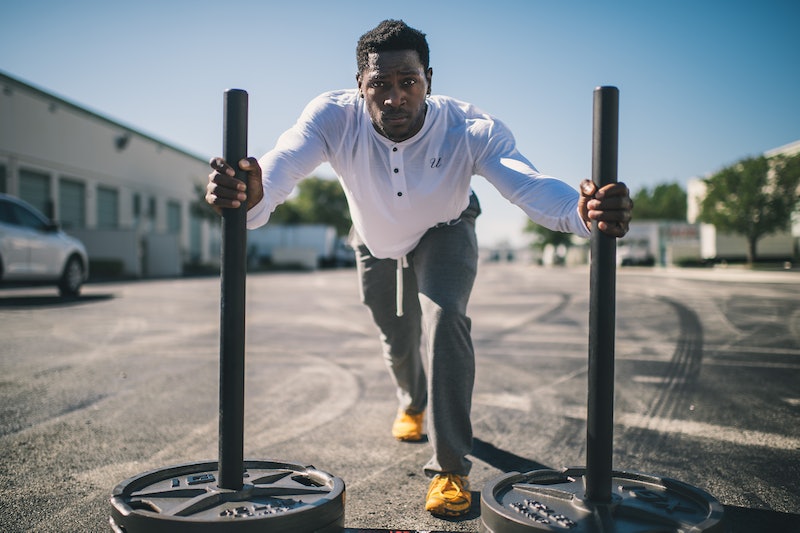 It's common knowledge that gray sweatpants tend to highlight a gentleman's, er, appendage, and a new challenge sweeping Twitter has a fresh take on this titillating garment. The #greysweatpantschallenge (or #graysweatpantschallenge, depending on your spelling preference), which started as a serious ode to dickprint, has recently morphed into a hilarious meme, but where did the Gray Sweatpants Challenge come from, exactly? The internet has seen its fair share of homegrown contests over the years; the cinnamon challenge kicked off the competitive spirit all the way back in 2001, and since then we have seen everything from the ice bucket challenge for charity to the recent #mannequinchallenge and the terrifying condom challenge. The Gray Sweatpants Challenge is the latest to trend, but the origins of this viral movement go further back than one might think.

All the way back in May of 2015, an article published on BuzzFeed entitled "Gray Sweatpants Are The Most Important Thing A Man Can Wear" was one of the first to celebrate photos of foxy men in grey sweatpants and the outlines of their genitalia. Though Twitter users had been commenting on their gray sweatpants predilection as far back as 2014, this roundup of photos culled from Tumblr and Instagram publicized the trend on a large scale. The growing trend towards "athlesiure" apparel, with expensive, designer sweatpants populating the market, helped make "gray sweatpants" even more of a thing — and as the perception of sweatpants changed, the amount of pics posted to social media grew as well, transforming these terrycloth trousers from something stinking up a gym bag into a sexy style statement.

Although the now-notorious #greysweatpantschallenge hashtag appeared in a more innocuous form on Twitter a few times in the past, referring to buying a pair of cool grey sweatpants...

...on Nov. 1, 2015 — just a little over a year ago — what looks like it might be the precursor to the current Gray Sweatpants Challenge arrived: A tweet posted by Twitter user ‏@RenzellRoque officially threw down the gauntlet with a hilarious video about how it feels to wear grey sweatpants:

Then we fast forward a year. In late November of 2016, the hashtag went viral, with gray sweatpants-clad Twitter users clamoring to post mirror selfies of their carefully positioned junk for all to see. Some of the physical endowments seemed to be quite impressive (and very NSFW), and the reactions flooded in from shocked and pleased viewers alike.

But, since this is the internet and nothing is sacred, the challenge took a hilarious turn over Thanksgiving weekend. Guys began posting a new take on the challenge — posting photos of whatever they could fit in their sweatpants. From Nov. 26 onward, guys (and other folks who wanted in on the action, too) around the world got pretty creative when it came to showing of the goods, stuffing their pants with everything from flatscreen TVs, to musical instruments, to household pets. Those hoping that the Gray Sweatpants Challenge would be a serious way to immortalize their junk on the net became the butt of a whimsical joke.

Whatever was laying around the house found its way into sweatpants, including whatever this is:

Dogs who are definitely not amused:

And, of course, The Bible:

While the creative tweeters with elastic waistbands basically won the internet, some bemoaned the meme backlash, wishing for the, er, purity of the challenge to be returned. Sadly, what is done can never be undone, and the challenge had taken on a new, definitely-not-sexy meaning.

I guess you can't always get what you want. Sometimes you get a tuba instead.