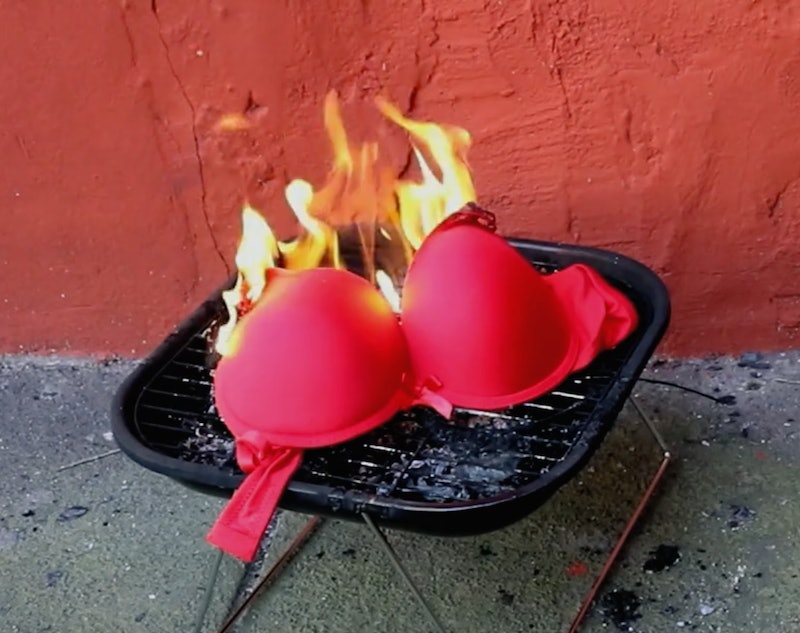 I think most of us can agree that, for many reasons, 2016 has been the Official Worst, and we’ve still got a month left (WHAT NEXT, UNIVERSE?). Here’s a little something that will keep your feminist heart warm through the cold winter: A perpetually burning bra, aka The Yule Bra. It’s just like those “Fireplace on Your TV!” videos, only it’s a bra burning on a hibachi. Originally created to celebrate the election of the first female president (still sobbing), the Yule Bra has been repurposed as a comforting outlet for your holiday and election-induced angst.

The Yule Bra follows a story depressingly familiar to the many people who were shocked and saddened by the results of the 2016 election. “The Yule Bra in its original form was a mini celebration of the First Female President,” Mary Dauterman and Sarah Lloyd of & Friends tell Bustle. “We were imagining that the day after she won would feel like a holiday. .... And the Yule Bra was gonna be a new tradition for that lady holiday.”

Obviously, the election didn’t turn out the way that Dauterman and Lloyd (and a lot of other people) hoped, but the Yule Bra took on a new purpose. “Once we stopped crying, we were like...wait...we should still make Yule Bra because F*CK EVERYTHING,” they say.

You can watch the Yule Bra slowly burn (and melt, because the innards of those things are full of plasticky stuff) on the Yule Bra website or YouTube for the rest of the year and after. Dauterman and Lloyd tell Bustle that they hope the bra fire will be “comforting in a ragey way!”

Bra burning has long been a symbol of feminism (although, fun fact, feminists in the 1960s didn’t actually burn their bras. That’s a myth that has often been perpetuated to trivialize the real goals of the feminist movement.); the Yule Bra is a tongue-in-cheek reminder that there is a still lot of work to do. And it’s versatile! Dauterman and Lloyd explain, “People can put it on at their parent’s house and zone out into the flames. Or at work. Or whenever they want to be reminded that we’re all still here together, and that we can and should still be as intensely committed to everything we cared about during election season (if not way more so) without the momentum of an election.”

So put up your feet, grab some hot cocoa, and listen to the oddly comforting, gentle crackling of burning undergarments.