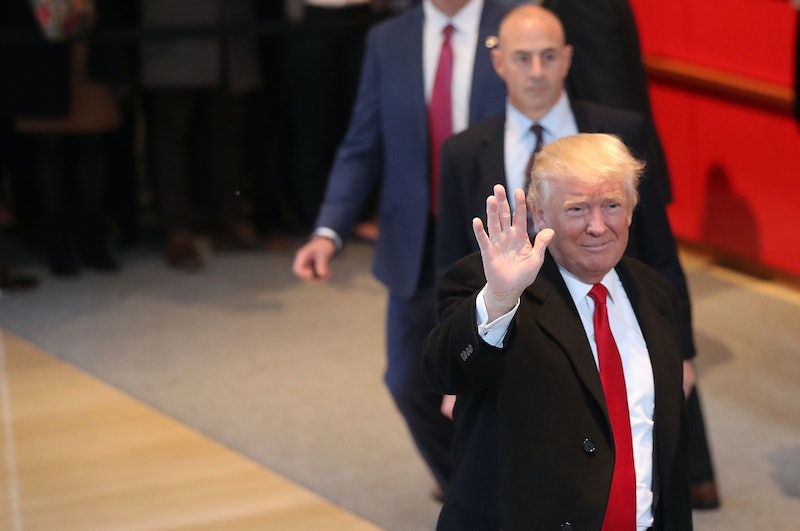 As Donald Trump's cabinet is beginning to take shape, one company (besides, of course, the Trump Organization and its potential conflicts of interest) is finding itself in the national spotlight: Goldman Sachs. Trump has so far announced two veterans of the mighty investment bank as members of his administration: Steve Bannon, who worked for Goldman Sachs before running Breitbart and will serve as senior White House adviser, and Steve Mnuchin, who was a partner for 17 years and is Trump's nominee for Secretary of the Treasury. Trump also met with Gary Cohn, Goldman's president, who is rumored to be a potential pick for the Office of Management and Budget. Also, Goldman Sachs stock is shooting up, as its status in Washington seems to be getting better.

Trump's embrace of America's most notorious financial behemoth is an odd look for a president-elect who spent much of the election attacking it. Already, some of Trump's most ardent supporters reportedly feel betrayed as he apparently abandons his populist rhetoric of fighting back against corruption and elites.

Let's look back at the Trump from the campaign, who railed against Goldman Sachs. Below are eight times he, or people fighting for him, did just that:

There was a brief time in January when Texas Sen. Ted Cruz was beating Trump in national polls. Trump struck back at a rally in Iowa where he attacked Cruz for having improperly disclosed a million dollar loan he'd received from Goldman Sachs, and said Cruz wouldn't protect people from the big banks. Trump, of course owes millions to the bank through his companies.

After a Super PAC attacked Melania Trump for a nude photoshoot she did for GQ, Trump tweeted an attack on Heidi Cruz, Ted Cruz's wife:

In an interview with a New York radio station in March, Roger Stone, a longtime Trump confidante, tied Trump's vague threat to Cruz's previous job at Goldman Sachs, and again mentioned Cruz's loan from the bank.

Stone said of Heidi Crus, "She was a top aide for Robert Zelick, who took her to Goldman Sachs — You remember who they are? The bank you and I bailed out. Goldman then subsequently gave a million dollar illegal sweetheart deal to the Cruz campaign, which he lied about."

Trump's senior policy advisor, Stephen Miller, opened for the candidate at a rally in Wisconsin in early April. He ripped into Cruz, claiming he wasn't a true conservative, and especially for his ties to Goldman Sachs and called him a "Wall Street globalist."

In a video that went viral, Ted Cruz tried to reason with Trump supporters in Indiana, who repeatedly insulted him. "Where's your Goldman Sachs jacket?" one of them asked, again tarring Cruz with his wife's employer.

After Bernie Sanders endorsed Hillary Clinton, his rival in the Democratic primary, Trump was quick to say he betrayed his values. He tweeted:

During the second presidential debate, Trump hit Clinton for her speeches to Goldman Sachs before she started running for president. Trump implied that Clinton was lying to the public about getting tough on Wall Street, and only telling the truth to bankers. "She got caught in a total lie. Her papers went out to all her friends at the banks, Goldman Sachs and everybody else. And she said things, WikiLeaks, that just came out. And she lied."

Just before the end of the campaign, Trump released a closing ad, which made sure to tie Clinton to "globalist" bankers. It featured footage of Clinton shaking hands with Goldman Sachs CEO Lloyd Blankfein, while Trump narrates, "It's a global power structure that is responsible for the economic decisions that have robbed our working class, stripped our country of its wealth, and put that money into the pockets of a handful of large corporations and political entities."

And now, Trump seems to be filling his administration with people from those exact same large corporations.