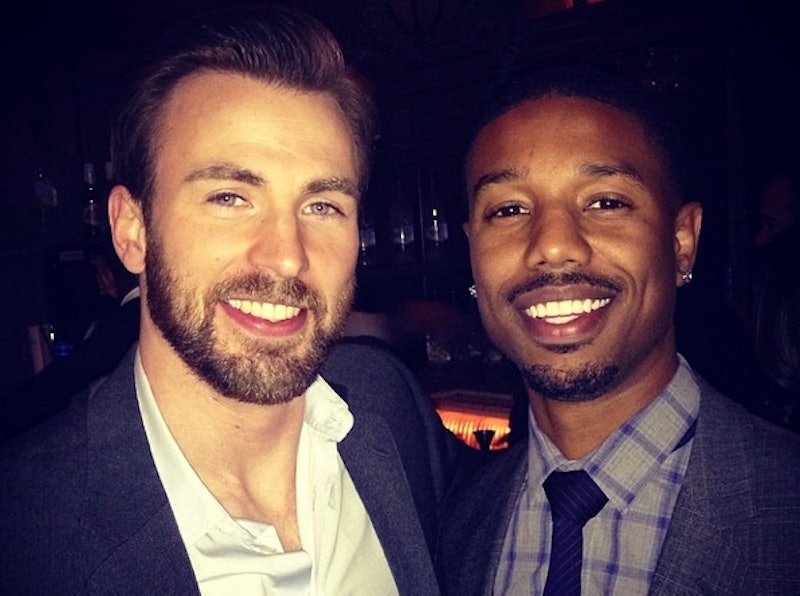 There was a lot of controversy over the casting a few months back of Michael B Jordan as the next Human Torch. That controversy was, for the most part, ragingly racist. So it's nice when we can, for a moment, set aside the in-fighting and the Big Questions about the past/present/future of comic book adaptations and just look on while two hunky, successful actors congratulate each other on that success. So witness this: Torch-passing from Chris Evans to Michael B. Jordan.

Jordan's role in Fantastic Four is, of course, the same one Evans played in the 2005 version of Fantastic Four (spoiler alert: Hollywood really likes rebooting superhero franchises) before he moved on to play another superhero as Marvel's Captain America. So what we have in this photo Instagramed by Michael B. Jordan with the caption "The Torch has been passed! #FlameOn" is two things.

The first: Some grade-A wordplay on the part of Mr. Jordan. They're both the Human Torch, get it? And the torch is being passed? Yes. The second: A nice display of support between two stars of the same franchise. Or perhaps a schism in the time-space continuum in which two Johnny Storm's exist at once, at once destroying and titillating humanity.

In either case, though the unofficial prequel to this Instagram was nice — the one in which once-rumored Spider-man Donald Glover and actually-cast Spider-man Andre Garfield show solidarity — it's even nicer to see an example of the industry actually casting the person of color for once.

Glover and Garfield's ironic side-eye (caption: "We talked it out."):