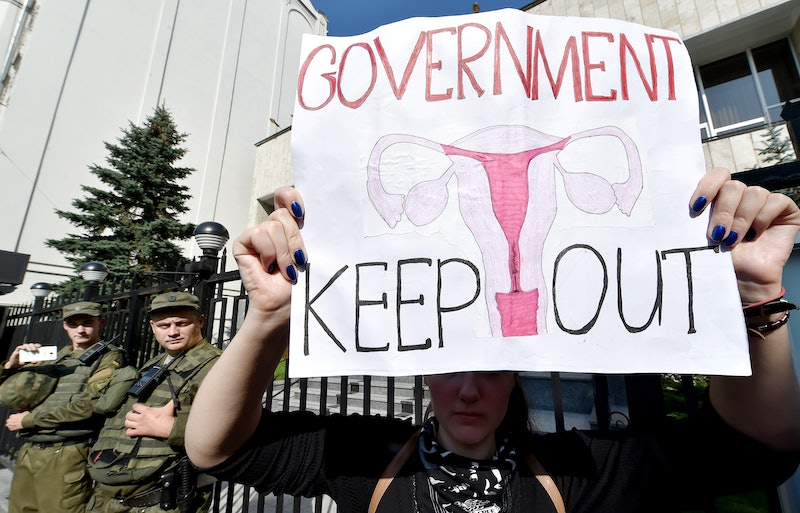 Lawmakers in Texas have taken a twisted new step forward in their efforts to curb abortion access following the Supreme Court's shutdown of its TRAP laws. Regulations requiring the burial or cremation of aborted or miscarried fetal remains will go into effect Dec. 19, state officials told The Texas Tribune earlier this week. Under new rules proposed in July and recently passed by the state's Health and Human Services Commission, hospitals, abortion clinics, and healthcare providers may no longer dispose of fetal remains in sanitary landfills, but must instead bury or cremate them, regardless of the gestation period.

Legislatures behind the new regulations have argued they serve to enhance the "protection of the health and safety of the public." One of the regulation's biggest advocates is Texas Gov. Greg Abbott, who reportedly told supporters in a fundraising email that the new rules were his administration's attempt to protect the "rights of the unborn." Abbott said it was his belief that fetal remains should not "treated like medical waste and disposed of in landfills" that spurred the regulation. "I believe it is imperative to establish higher standards that reflect our respect for the sanctity of life," The Tribune reported Abbott said in the email.

Following concerns over the process of collecting fetal remains following non-hospital abortions or miscarriages, state officials have said the regulation does not apply to miscarriages or abortions that occur at home. This means medication abortions, or those done using the Abortion Pill, are not likely to be affected.

Critics of the new regulation have called it unnecessary, and argue that it stands to place extra financial and emotional burdens on women. While lawmakers have stressed that providers, not patients, will be responsible for arranging for the burial or cremation of fetal remains, such services can cost a few thousand dollars. Abortion advocates expressed concerns the regulation would drive up abortion costs, thus putting the service out of reach for many women during a public hearing on the provisions held in August, The Austin American-Statesman reported.

But state officials are arguing fetal burial provisions won't affect providers overall costs. "The proposed rules won't increase total costs for healthcare facilities," Department of State Health Services Spokeswoman Carrie Williams told The Dallas Morning News. "While the methods described in the new rules may have a cost, that cost is expected to be offset by costs currently being spent by facilities on disposition for transportation, storage, incineration, steam disinfection and/or landfill disposal."

Yet critics of the rules claim these regulations are concerning for more reasons than just their potential added costs. According to Vice, some abortion advocates believe such fetus funerals are representative of anti-abortion lawmakers' moral agenda, as they force women and abortion providers to play along with the idea that life begins at conception. Given that abortions and miscarriages are already emotionally difficult without patients or providers having to treat fetal remains to funerals, Texas' new regulations could prove particularly devastating to some women.

Texas isn't the only state looking to change how medical providers treat fetal remains. While similar fetal burial bills failed to pass in South Carolina and Mississippi earlier this year, one is still under consideration in Ohio. Moreover, a series of abortion regulations, including a fetal burial provision, Vice President-elect Mike Pence pushed to be put into effect in Indiana in June have been suspended pending ongoing litigation. In Louisiana, a burial or cremation regulation set to go into effect in August was put on hold following a lawsuit filed in July by the Center for Reproductive Rights.

Texan legislatures may find their new regulation also spurs legal challenges. In a letter to state Health Services officials, the Center for Reproductive Rights warned that it "fell short of the constitutional requirements reaffirmed" in Whole Woman's Health v. Hellerstedt, and "will almost certainly trigger costly litigation." The Supreme Court struck down a Texas law requiring that abortion providers have hospital admitting privileges and that clinics meet hospital-grade standards with their June ruling in Whole Woman's Health v. Hellerstedt, sending the message that regulations on abortion access must be clearly proven to be medically necessary.

Despite the landmark decision in Roe v. Wade, abortion remains a highly controversial issue. With President-elect Donald Trump vowing to overturn a woman's constitutional right to abortion, anti-abortion lawmakers are already doubling down on efforts to restrict abortion access across the country.