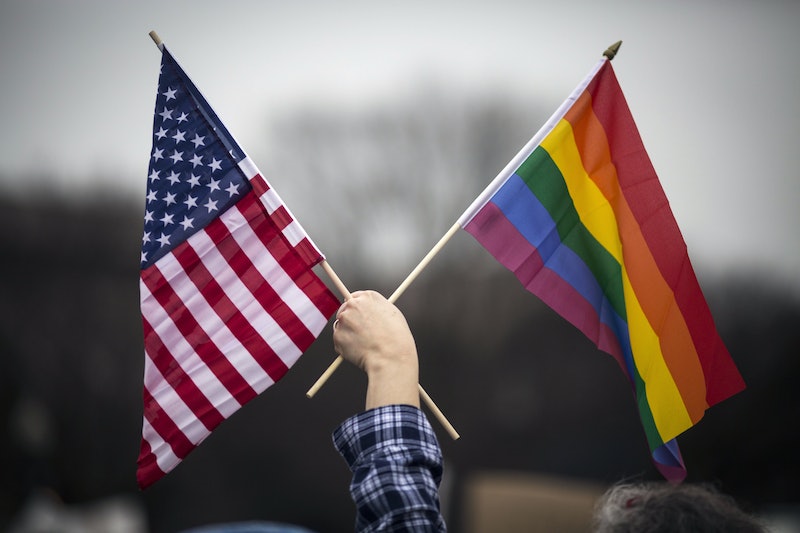 The administration and early cabinet picks of President Donald Trump — including Vice President Mike Pence, a frequent opponent of LGBTQ rights; potential Attorney General Jeff Sessions, who supported "don't ask, don't tell" as well as a constitutional ban on same-sex marriage; Betsy DeVos, potential secretary of the Department of Education, who has caused concern among many LGBTQ groups about her possible past involvement in anti-LGBTQ causes; and chief of staff Reince Priebus, who claimed that being raised by heterosexual parents is the "best scenario" for a child — have raised a justified concern among many that the new administration will threaten the rights of transgender and nonbinary people on a greater scale than we've seen in years. We are not even a week into the Trump administration, but there have already been a number of worrying moves. Before even taking office, Trump threatened to overturn an executive order passed under President Barack Obama that offered protection for trans government employees from discrimination, and in his previous role as governor of Indiana, Vice President Pence signed a state bill into law that stated that businesses could ignore local anti-discrimination laws based on gender identity.

Many of us are wondering right now about the best ways to be allies to all of the people who will have their rights threatened by the Trump administration. On a personal level, know that even if you think that the people in your life know you support them, it never hurts to reiterate that love and trust in times of turmoil. But communicating with your loved ones is just the beginning. We need to be strong and vocal allies of the people in our lives, but what more can we do on a local, public, and national level to show support for the transgender and nonbinary communities? Many binary, cisgender people want to help, but it can be difficult to know how to translate that desire into actions that truly have a positive impact.

I spoke to six activists from five organizations in the lead up to Inauguration Day about what one can do now to be an ally in action, not just in words.

1. "Talk about the available resources any time you talk about challenges in the community."

[Allies] can help others to spread the word that Trevor is here to support Transgender and Gender Non Conforming youth 24/7 (The Trevor Lifeline can be reached at 866-488-7386), and that TrevorSpace can offer a much larger connection to other people who are going through similar experiences.

Also, it would be helpful if they could repost our trans and GNC supportive messaging on social media pages to help spread awareness — it’s important, though, to always talk about the available resources (above) any time you talk about challenges in the community.

Supporting The Trevor Project is important, as over a third of those who use our services are trans* or GNC. Sharing Trace Lysette's new PSA is a great way to get the word out there about our resources. Also our Support Center has a whole section on Gender Identity for allies to educate themselves. Using correct and current language, and educating others on language, is a great way for allies to support, as well as advocating for human rights with the Transgender Law Center and Lambda Legal.

2. "Step up to invest in our healing justice."

Janetta Johnson, of the TGI Justice Project, which describes itself as "a group of transgender, gender variant, and intersex people — inside and outside of prisons, jails, and detention centers — creating a united family in the struggle for survival and freedom," had this to say:

During this political era, there's some fear and anxiety. We are forced to stay vigilant and fight like hell, safely plan our economic justice and human rights. I'm hoping that folks in power and privileged positions step up to invest in our healing justice, so we can continue to meet and strategize on a safety plan. We should be meeting on a national level to love on one another, encourage each other, and teach one another.

Susan Maasch is the director of the Trans Youth Equality Foundation, which provides "education, advocacy, and support for transgender children, youth, and their families." Maasch told Bustle that "[d]uring this tough... time for transgender youth and their families, the national organization Trans Youth Equality Foundation tries to focus on resiliency and allyship" and suggested the following methods for being a supportive ally:

Ask your librarian to get more trans kid friendly books — see our list of recommended books. Donate books to TYEF or your local trans org. Donate money to TYEF. It’s tax deductible and all donations go directly to our programs. Recommend our website to learn and support trans kids.

Be a great listener for your trans child or student. If you are a parent... .find a support group for your child and/or for you. Start a support group in your area, TYEF sometimes can support you in that effort. Take new family pictures that show your child after transition. Hang them up with pride.

Ask your child's school to see a copy of their non-discrimination guidelines and anti-bullying guidelines. Make suggestions, know your rights. Make sure to ask the pediatrician if it is a good idea to see a Endocrinologist and get a recommendation. Make sure your child or student is reminded that you think they are the greatest just the way they are!

"Whether it’s through sharing videos and articles online, attending workshops and/or speaking with folks in your day-to-day life – we have to breakdown the myth that trans people live hypothetical lives. We are very much real, we’ve been here and not going anywhere."

4. "We need allies to follow our lead and support our work."

From transgender immigrants seeking asylum to young transgender students being singled out in their schools, many members of our community are afraid right now. Access to life-saving health care, identity documents, employment, safe housing, and all the necessities to survive and thrive in this country are on the line. This is a critical moments for allies to support their transgender friends, family, and community members, particularly Muslims, immigrants, people of color, people with disabilities, and all of those most targeted by the proposals and rhetoric of the president.

One important way you can show up as an ally is by donating to and volunteering for organizations led by transgender people of color. We are resilient and we know how to fight for ourselves and keep each other safe, and we need allies to follow our lead and support our work. Research and support the local groups that are directly serving and organizing people in your region. Nationally, Transgender Law Center always needs volunteers for our helpline and Detention Project, which has seen a huge increase in requests from the community since the election.

Beyond donating and volunteering, we need you to talk to the people in your life. So many people still don’t understand what it means to be transgender, and one-on-one conversations are the best way to build understanding and empathy. Transgender Law Center and GSA Network, through our youth-led TRUTH program, have created several videos of young people and their families sharing their stories, which can serve as helpful educational tools for people who are new to thinking about this. Educate yourself and your community on issues like HIV prevention, funding for which will likely be targeted in the next few years. Our Positively Trans program is a great place to start, with reports and video stories created by transgender women of color living with HIV.

Most importantly, stay informed, connected and active. Sign up for the email lists of national organizations like TLC or local groups in your region, so you know what is happening and can take action when you’re needed. This struggle is going to continue long past inauguration, and we need you to stay with us.

5. "Listen to our stories, call out injustice when you see it, and fund organizations and projects that support us directly."

I think one of the most powerful ways that people can ally with the trans and gender nonconforming community is listening to our stories, calling out injustice when they see it, and funding organizations and projects that support us directly. This election has really shown just how much transformation needs to happen on a personal level. I truly believe that creating, maintaining and supporting spaces in which trans and gender nonconforming people can share their stories safely is important.

Whether it’s through sharing videos and articles online, attending workshops and/or speaking with folks in your day-to-day life – we have to breakdown the myth that trans people live hypothetical lives.

We are very much real, we’ve been here and not going anywhere. As well, we need our allies to speak up for us in spaces where we may not be able to. Lastly, we are a very marginalized community, dealing with intense discrimination in health care, housing, education, employment and more. Oftentimes the wealth to create the world that we need to survive isn’t there. That’s why it’s important that people with the privilege to share some of their wealth support organizations that help the trans community directly and effectively. Groups like Transgender Law Center, TGI Justice Project, Audre Lorde Project, Breakout!, TransLatina Coalition, TWOCC and more have long histories of doing that work.

6. "Allies can play a critical role — by setting a more inclusive tone in their communities."

Kasey Suffredini is a transgender attorney with nearly two decades of experience working on LGBT issues, and the chief program officer of Freedom for All Americans and director of the group's Transgender Freedom Project. Suffredini said:

In 32 states, there are no explicit prohibitions against firing a person from their job, kicking them out of their apartment, or refusing service in a restaurant or hospital simply because they are transgender. This pervasive discrimination makes it difficult for us to provide for ourselves, take care of our families, and go about our daily lives. Our dignity will especially come under attack as legislatures reconvene across the country. Allies can play a critical role — by setting a more inclusive tone in their communities; by growing support for fair treatment among their friends and family members; and by vocally advocating for these vital nondiscrimination protections.