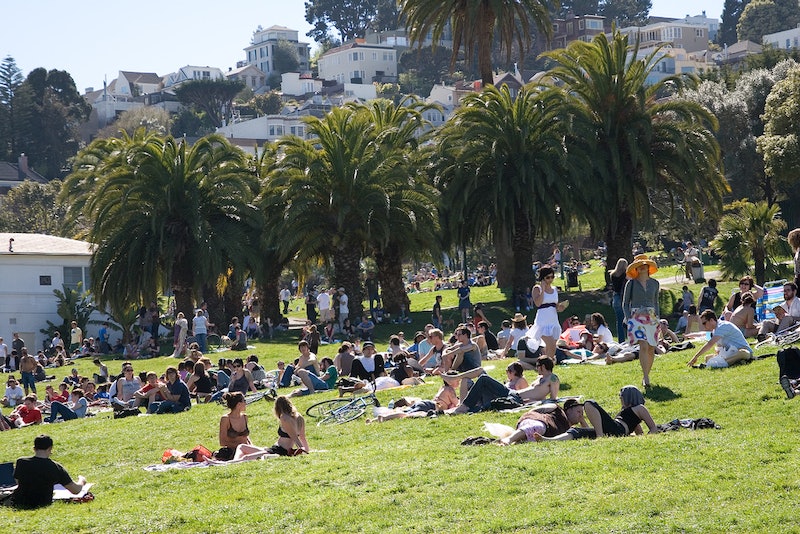 When I graduated college, my initial plan was to teach English in Japan. I did months of research, applied for a program, went in for an interview ... and then bailed at the last minute. Why, you ask? Because I had started hanging out in San Francisco.

Even though I was born in the Bay Area and spent my whole life a mere twenty minutes away in Marin, once you have it in your head that it's within the realm of possibility to actually live in San Francisco, it's all over. Check and mate. I dropped my Japan plans, moved to SF, and embarked on three of the best years of my life.

Sure, San Francisco (or "San Fran," as non-locals are mysteriously intent on calling it) has its share of drawbacks. Rent is prohibitively expensive, MUNI is never on time, and summer basically doesn't exist (although that's changed somewhat with global warming — see below).

But the good far outweighs the bad, and regardless of who you are or what you want to do with your life, you should probably pack up and move to San Francisco right now.

If you live here, you know what I'm talking about. Here's how you know you're a true San Francisco local.

They only happen, oh, every other week in SF.

You know what this guy is selling

You know that Chipotle is not real Mexican food

Or any Chipotle burrito, for that matter. You also know to say hi to the door guy at Pancho Villa.

You've gotten drunk at an aquarium

And it wasn't weird, because that's what NightLife is there for.

You’ve considered working at a startup, despite having zero interest in the tech industry

Or, alternatively, you already work at a startup, despite having zero interest in the tech industry.

You’re not sure what your neighborhood is called anymore

You just know is that it used to be called Western Addition.

You'd celebrate global warming, if only you weren't so socially conscious

Because it's given San Francisco near-perfect weather.

For one week a year, you enjoy complete calm and tranquility...

...or you go to Burning Man, and run into all of your neighbors.

...in one of the most dangerous parts of the city.

But once you realized that that's how all MUNI buses work, you started chastising others for failing to do the same.

Because you know they wouldn't care anyway.

You know that when you need tamales, they'll be there

Because the Tamale Lady always shows up at just the right time.

Only it wasn't "regular" at all, because it was Philz.

You’ve visited a friend who works at Google just to get free food at the cafeteria...

...But you don't believe the hype about it being a such great place to work

Since everyone you know who works there hates it. Or, alternatively, you work there and hate it.

You've thought a fixed-gear is worth having, despite SF’s hills

It’s not. Anyone who tells you otherwise is either lying or a masochist.

You sometimes forget that you live right near a beach

But when you do go, you always pack your North Face fleece.

More like this
This Is When Netflix Is Going To Start Charging You For Sharing Passwords
By Darshita Goyal
Twitter Has *A Lot* To Say About The "Single Penalty”
By Sam Ramsden
'The Catch' Revisits A Famed Irish Filming Spot From 'The Tudors'
By Darshita Goyal
A Guide To All Of Zach Shallcross' 'Bachelor' Filming Locations
By Brad Witter
Get Even More From Bustle — Sign Up For The Newsletter
From hair trends to relationship advice, our daily newsletter has everything you need to sound like a person who’s on TikTok, even if you aren’t.