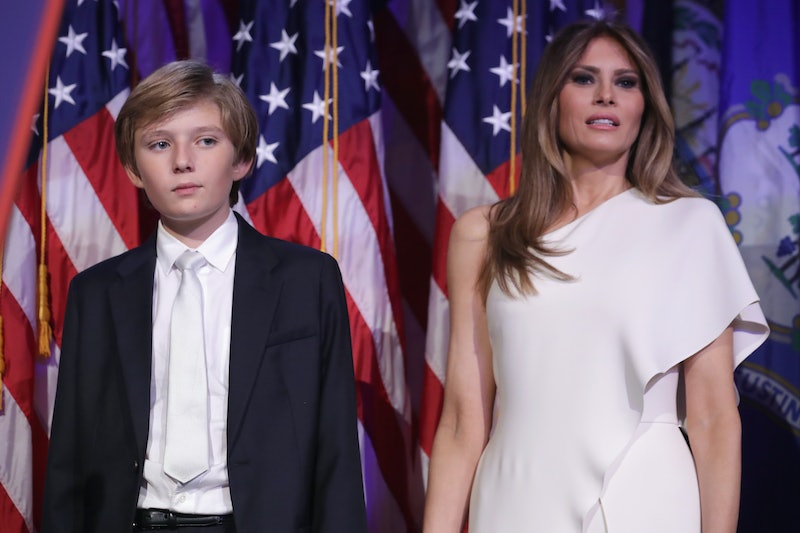 Donald Trump and his family really aren't making this transition thing easy. The latest news is that Melania Trump doesn't want to move to Washington, D.C., right away (if at all), a decision that will cost New York City taxpayers millions of dollars. Now, New Yorkers are petitioning to not for Trump to stay in the city, because there are a lot of other good things that that money could go to, and everyone knows it.

Her reasons for wanting to stay in the city are legitimate — or at least they would be, in another situation. The campaign has been difficult for 10-year-old Barron Trump, sources have said, and his parents don't want to make him switch schools in the middle of the year. This means that Melania will be the first of our first ladies since William Henry Harrison's wife, Anna, to not immediately move to the White House. Anna never actually lived there, in fact, because her husband died a month after taking up the post of president. Martha Washington also never lived in the White House, but she had a different excuse — it hadn't been built yet. Melania is set to be only the second foreign-born first lady, after Louisa Adams, who was born in England before the United States existed. And yet, Melania doesn't seem to be too excited to take on her new life.

This would all be well and good, if Melania and Barron didn't now need security details with them at all times. CNN estimates that New York City will need to fork over up $1 million a day to keep the Trumps safe, and their continued presence at Trump Tower will seriously clog up traffic in one of the world's most densely populated districts. Selfishness doesn't even begin to cover it, really. The Trumps want their son to be marginally happier, and they're asking the country's biggest city to foot the bill and deal with the hassle and annoyance.

And New Yorkers aren't cool with that. More than 75,000 people have signed the petition already, and it needs 150,000 signatures before it gets sent to New York City Mayor Bill De Blasio and New York Gov. Andrew Cuomo. It makes a good case: $1 million a day would pay for a lot of improvements to the city's infrastructure, meals for the people who wouldn't get them otherwise, and schools for children whose families can't pay $40,000 for a year of tuition. It's a classic ethics case — do you help the one at the expense of many, or help many at the expense at one? For the New Yorkers and others signing the petition, the case is clear.