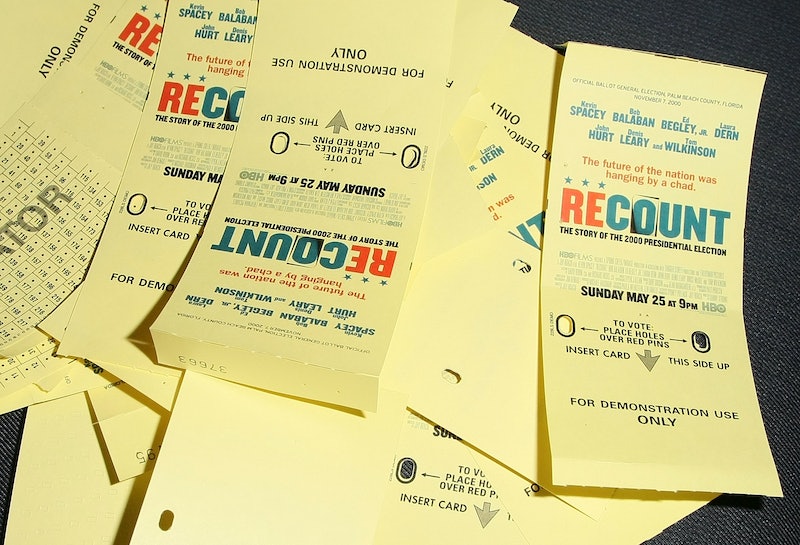 With all the furor surrounding the vote recounts in Wisconsin, Pennsylvania, and Michigan, questions have started arising about recount central: Florida. Before going into what would happen if Hillary Clinton won a Florida recount, though, it's necessary to note that a Florida recount happening at all is highly unlikely.

Jill Stein has spearheaded recount efforts in Wisconsin, Pennsylvania, and Michigan, the three Rust Belt states that the Clinton campaign once assumed to be her supposedly unbreachable "blue wall." She hasn't yet turned her sights to Florida, though, so don't look out for hanging chads just yet.

Although Florida was the site of the now-infamous recount in 2000 that was part of the process that ended up handing the election to George W. Bush, the situation is different this year. According to Florida law, the election results must be within 0.5 percent to trigger a recount, and the Florida secretary of state must call for it. A candidate herself cannot ask for a recount, although she could write in to request that one not be held.

As it stands right now, Donald Trump won Florida by 1.3 percent — so barring something extremely unpredictable (which, of course, I can't rule out in this election cycle), there will be no Florida recount to speculate about.

In an alternate universe where something insane happened to spark a Florida recount and Clinton won it, that still wouldn't be enough to give her a victory. Florida has 29 electoral votes, and Clinton would need 38 votes total to get her to 270. So, a victory in Florida could potentially help her if, for example, the recount in Wisconsin gave her that state's 10 electoral votes, but she didn't see the same success in Pennsylvania or Michigan. A combination of a win in Florida and in any one of those other three states would give Clinton victory in the electoral vote, but the situation is so improbable that it's hardly even worth considering.

For now, those hoping that a recount will change the results of the election will just have to keep their fingers crossed that the recounts in the Rust Belt will uncover something huge. It's a long shot, as Trump's margins of victory are much bigger than any difference that a recount has ever made. Even so, that's much more likely that a Florida recount will come into play. Florida had its moment in 2000 — now it's Wisconsin, Pennsylvania, and Michigan's turn.