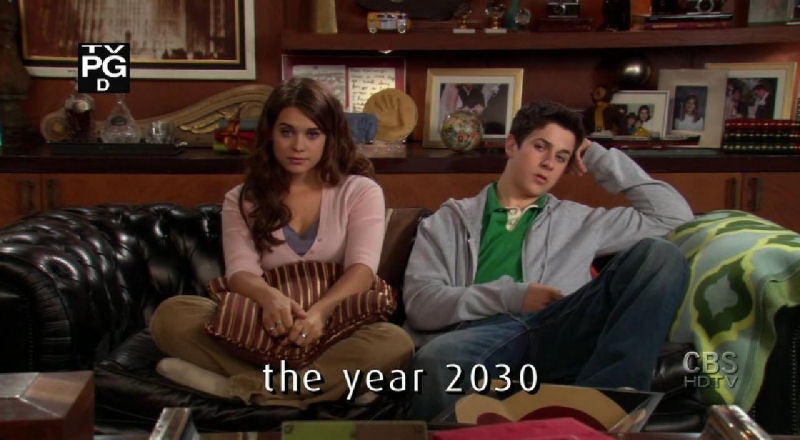 A lot of people were really upset by How I Met Your Mother's plot twist of having Ted go back to Robin. So upset that it landed the show among the top 10 most-hated finales. There are fans who have said they wished they'd never watched the end so they could pretend it never happened and re-watch the show in a state of innocence. But have faith, HIMYM fans, it does get better, and we have proof in the form of the actors who played Ted's kids, David Henrie and Lyndsy Fonseca knew about the ending for nine years.

To ensure that Ted's children didn't age throughout the telling of his story, all of their scenes were filmed way back in 2005, including their reaction to the end of their father's story.

"We were sitting on set then out of nowhere everyone leaves," Henrie said. "They bring in these contracts, Lyndsy and I sign them. Then the show runners go 'We're going to tell you how the show ends.'"

And that, kids, is the story of how Henrie and Fonseca found out how the show ended, and also managed to survive it without even being able to commiserate with anyone. Now when a tragic television event takes place everyone can gather to mourn a character death or plot twist together on Twitter, but nine years ago Henrie and Fonseca were sworn to secrecy. "I'm 24 now, but when I turned 21 I started going out with my buddies. Everyone was always asking me 'Dude, who's the mom? Who's the mom?'" Henrie said. "People would try and bribe me with all sorts of alcohol, but I kept silent. I didn't tell anyone. I didn't even tell my mother."

So not only could Henrie star in the spin-off How I Didn't Tell My Mother, he's giving fans maybe the best news they could get coming out of that finale, that it's going to be okay and it won't ruin the show for you. After all, Henrie and Fonseca had to watch the entirety of the series knowing this big spoiler, and yet they still like the show. "I'm really proud of to have been a part of it," Fonseca said.

Unlike fans, they don't wish they could go back to their ignorance is bliss stage. Just as their characters were okay with their dad getting a new love, the actors seem to be doing just fine even after learning the season shocker nine years ago. So if you're down about the finale think of it like this, the writers knew this was the plan the whole time. So any rumor that they threw the ending on at the last minute isn't true. They wrote it that way from the get-go, and we can kind of take solace in the intention of it all, right? And even if we can't, we know that in at least nine years we'll be okay just like Henrie and Fonseca.