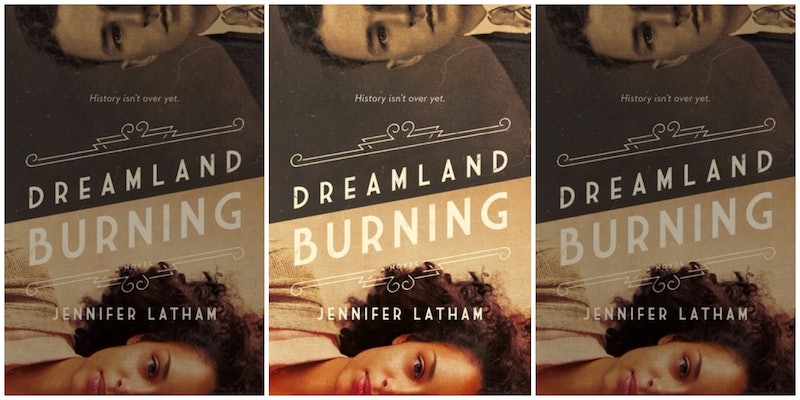 Earlier this year, singer and activist John Legend announced his intentions to bring the story of "Black Wall Street" to television. Black Wall Street was the name given to an all-black community in Greenwood, Oklahoma that thrived during the early 1900s – socially and financially. If you haven't heard of Black Wall Street before now, it's probably because the community was viciously attacked and burned to the ground by white rioters in 1921 in a savage two-day massacre that has since become known as The Tulsa Race Riots. In Jennifer Latham's forthcoming young adult novel, Dreamland Burning , that brutal event takes center stage in a story about the insidious ways racism pervades our history, our culture, and our everyday lives. Bustle is proud to present an exclusive excerpt of that novel, which will be available on Feb. 17, 2017.

Dreamland Burning begins when 17-year-old Rowan Chase she unearths a skeleton on her family's property. The gruesome find leads to an even more heinous discovery about the history of her city, Tulsa. The discovery that white citizens brutally murdered around 300 black people, looted their property, and burned the community to the ground nearly a hundred years earlier.

The novel is told in alternating perspectives: Rowan Chase narrates her journey as she discovers the truth of the massacre; and William Tillman, a 17-year-old boy of white and Native ancestry who lived during the massacre, narrates his chapters as he attempts to face his demons and do what's right in the wake of unimaginable evil and hatred.

A gut-wrenching look at one of America's darkest moment, Dreamland Burning is an essential read for teenagers (and adults) who want a better understanding of how racism has impacted our country's past — and present. Bustle is proud to reveal an exclusive excerpt from Dreamland Burning , which you can read below.

Finding a skeleton with a bashed‑in skull was a bad way to start the day. Getting into a fight with my best friend was a supremely shitty way to end it.

At first, things were fine. It was one of those gorgeous Oklahoma nights in the Brady Arts District when the sun hovers low in the sky so long you wonder if it’s ever going to set. Even with a Drillers game at ONEOK Field, James and I found parking spots outside the instrument repair shop that has rows of old violins hanging in the window. He wanted to catch a few innings from the five-dollar outfield lawn seats, but it gets crowded back there, and I wasn’t crazy about the idea of people listening to our conversation. So we sat on one of the benches around the Guthrie Green splash pad instead, close enough to catch spray from the kids running through in their shorts and T‑shirts, but far enough away from their parents to have some privacy.

At first, things were fine. It was one of those gorgeous Oklahoma nights in the Brady Arts District when the sun hovers low in the sky so long you wonder if it’s ever going to set.

James and I go to the Brady a lot. It’s a few blocks north of downtown and just west of Greenwood, with art galleries and restaurants and bars and a glassblowing studio where they let you get close enough to the ovens to break a sweat. There’s usually some kind of performance happening on the stage at the Green—Red Dirt bands, dancers, the symphony. That night it was actors in black leggings and white T‑shirts doing scenes from Othello. A few families were scattered around on blankets, along with oldsters in lawn chairs and a white couple with matching dreads making out next to their bikes.

“What happened after I left?” James asked. “Anything good?”

I pretended to think hard. “Oh, definitely. Let’s see . . . you were there for most of our conversation with the world’s least exciting police detectives, so the main thing you missed would have to be the medical examiner who spent ten minutes not touching the body. And—oh yeah—you didn’t get to hear Dad making sure our shiny family name stays out of the news.”

“I promise,” I said. “It was completely undramatic. Even this was a letdown.” I took the wallet from my purse and handed it to him, busted side up. “See for yourself.”

He opened it up and felt around inside the empty bill compartment.

“Careful,” I said. “One side of the change pocket is shot.”

He caught two coins as they fell out. “We should have given this to the police. If they find out we took it—”

I cut him off. “Trust me, they won’t. The detectives basically told Mom and Dad they’re too busy with new cases to spend time on something this old. If the forensic anthropologist doesn’t find anything, my guess is no one will. I’m glad we kept the wallet. At least this way the two of us can do some detective work on our own.”

James jiggled the rest of the coins in his palm and turned them over one by one.

“Right. So unless someone snuck back to the crime scene, tore up the floor, and stuck fresh coins in the skeleton’s wallet, it must have been a live human being then.”

A little girl next to us gathered water in her cupped hands and threw it in a littler boy’s face. The boy ran off howling. James took out his phone, punched something in, and scrolled down, muttering, “Well, that makes things interesting.”

I leaned closer. “What?”

Which, I confess, was something I didn’t know much about beyond what we’d covered in ninth-grade Oklahoma History. Something had happened between a black teenage boy and a white teenage girl in a department store elevator, then things melted down outside the courthouse the next night. Most of Greenwood ended up burning, and everyone pretty much tried to forget about it.

One thing I did remember was that no one knew for sure how many black people had been killed. But what stuck with me most was our teacher’s description of how black survivors had been marched like prisoners of war to holding centers and forced to stay there until a white person showed up to vouch for them. Once they were released, they’d had to pin a green card onto their clothes that basically said, “I’m a good Negro.” It wasn’t exactly the same as the yellow stars the Nazis made Jewish people wear, but it wasn’t completely different, either.

Most of Greenwood ended up burning, and everyone pretty much tried to forget about it.

Still, I didn’t see how the skeleton could have had anything to do with all that. The riot happened at the northern edge of downtown and in Greenwood—not in my neighborhood. And even more than now, Maple Ridge in the 1920s had been for rich white people.

James kept messing with his phone, twisting his mouth up on one side.

“There’s a cold case database on the police department’s website,” he said. “But it only goes back to the 1970s.” His fingers kept moving. “Jesus—did you know forty-one people were hanged in Oklahoma between 1907 and 1930? Most of them were black, and there were probably a lot more lynchings that never got recorded.”

I hadn’t known that, and kind of wished I still didn’t.

James elbowed my ribs. “Did you hear me?”

I elbowed him back. “I did. And it’s awful. I’m just glad things are better now.”

A look came over James’s face, like all of a sudden he couldn’t recognize me. “Are they?” he said.

I swung one leg behind the bench, straddling it so we were looking at each other. “Are they what?”

I leaned away without meaning to. “I’m not an idiot, James. I know things aren’t perfect now, but they aren’t as bad as they were in the 1920s. People don’t get lynched anymore. You and I can go anywhere we want. We’re black, and we both go to a nicer school than most white kids.”

I elbowed him back. “I did. And it’s awful. I’m just glad things are better now.” A look came over James’s face, like all of a sudden he couldn’t recognize me.“Are they?” he said.

The wrinkles on his forehead disappeared and his face went blank. “It’s way more complicated than that, Chase.”

I bit my tongue.

“I never told you what happened to the guy I’m tutoring at the library, did I?” he said.

“Well, his name’s Eduardo, and last month he spent two weeks hanging drywall for this contractor who promised him fifteen hundred bucks cash for the work. Eduardo’s got three kids. He’s a good guy, and he wouldn’t do things under the table if he could get a work permit. Only he can’t. So he takes this job, and when he finishes and goes to the contractor to get paid, the contractor tells him sure, he’ll write a check—as soon as Eduardo shows him his papers. Only he knows Eduardo doesn’t have papers. And since Eduardo can’t go to the police and report him, he also knows there’s no way he’ll get caught. He ripped off my friend and there’s nothing Eduardo can do about it.”

“That sucks,” I said. “And now I get why you were worried about the workmen. But Mom and Dad wouldn’t hire a contractor like that. I’m sure the one they’re using pays his workers.”

James was getting worked up. “That doesn’t change the fact that the system’s jacked against people like Eduardo and me.”

He said it loud enough to make the little girl in the splash pad look over at us. I tilted my head toward her, letting James know he needed to calm down, and whispered through my teeth, “There’s a big difference between a mob lynching a black man and some asshole ripping off a guy because he’s undocumented, and you know it.”

James was getting worked up. “That doesn’t change the fact that the system’s jacked against people like Eduardo and me.”

James shook his head slowly. “The crime’s different but the problem’s the same. It’s about power and prejudice and shit rooted so deep that people don’t see it anymore. You know we’re six times as likely to go to jail as white people, right?”

“Of course I know that,” I shot back. “My mother’s a black public defender, for God’s sake, so you can skip the lecture.”

"It’s about power and prejudice and shit rooted so deep that people don’t see it anymore."

“You can’t wish it away,” James said softly. “Trayvon Martin, Michael Brown, Eric Harris, Laquan McDonald—they’re just the ones who made the news. And I know you know that, but sometimes you disappear inside this rich-girl bubble where someone always fixes things when they go wrong, and your brown skin only counts against you until you mention your daddy’s name. Most of us don’t have that luxury, Chase. There’s no room for us in your bubble.”

Things were happening inside me. Ugly, uncomfortable things that I can’t even describe. But I wasn’t going to let James see me cry.

“I’m sorry I’m such a disappointment to you,” I said around the tightness in my throat. James pretended to watch the actors on the stage. I got up, turned my back on my friend, and walked away. And I didn’t shed a single tear. Not until I was safe inside my car, with the tinted windows rolled up and the door locked tight behind me.

More like this
In Sarah Ramos’ 'Zaddy,' The Horrors Of Barre Are Laid Bare
By Sarah Ramos
Candice Carty-Williams’ 'People Person' Tackles Daddy Issues With Warmth
By Sam Rogers
16 Novels That Paint A Realistic Portrait Of Abortion
By K.W. Colyard
30 Books To Read This AAPI Heritage Month
By K.W. Colyard
Get Even More From Bustle — Sign Up For The Newsletter