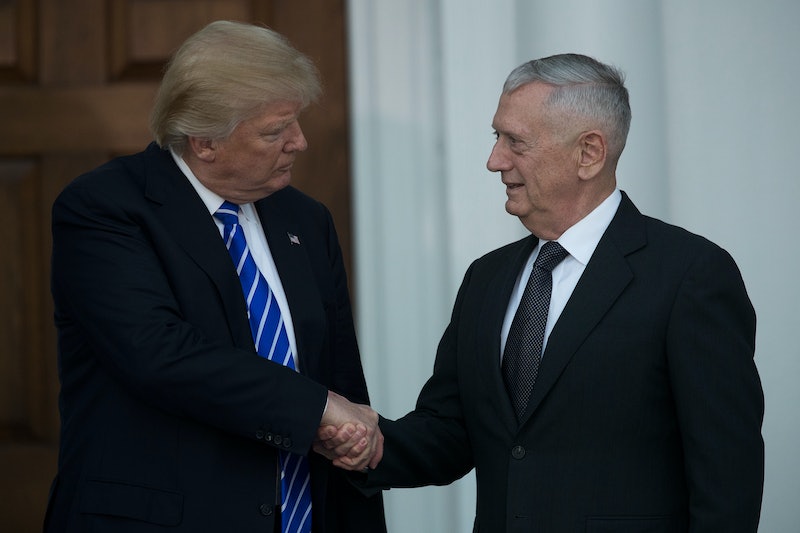 President-elect Donald Trump has reportedly made his choice for secretary of defense, filing his cabinet with another hard-line critic of President Obama. His appointment for secretary of defense is James "Mad Dog" Mattis, a retired United States Marine Corps general who is known just as much for his colorful language as he is his military accomplishments. Though considered a "warrior monk" among his fellow Marines, former General Mattis has a problem — the secretary of defense position dictates that the secretary be out of uniform for at least seven years, and Mattis only retired in 2013.

This means that Mattis may have difficulty being confirmed by Congress at all, as he would only be the second general to ever receive a waiver for the position under these particular circumstances. Though he does have some good favor among those on Capitol Hill, this seven-year rule was not made to be continuously broken. The rule was first instated when the secretary position was created in 1947, intended to give some distance between the battlefield and political position.

When Congress granted a waiver to President Truman when he nominated George C. Marshall in 1950, it made it clear that the waiver was meant to be a one-time deal. It said that its consent to Marshall's appointment was "not to be construed as approval by Congress of continuing appointments of military men to the office of Secretary of Defense in the future." It said following Marshall's nomination that "no additional appointments of military men to that office shall be approved."

Will Trump and Mattis be able to turn that rule around? It's possible, but it should give both at least some cause for concern.

And then there's the issue of Mattis' premature retirement. Though the details surrounding his retirement as commander of Central Command are murky, it's believed that Mattis may have been ushered out of his position several months early due to his hawkish stance on Iran. This position supposedly worked in contrast to the Obama Administration's stance, and thus the military lost Mattis as a commander earlier than planned.

Given Mattis' short time as a civilian and unexpected departure from the military, it's possible that these conflicts may come into play. Trump's scramble to nominate him despite these issues with the secretary of defense rule may, again, point to a larger problem with the impending Trump administration.