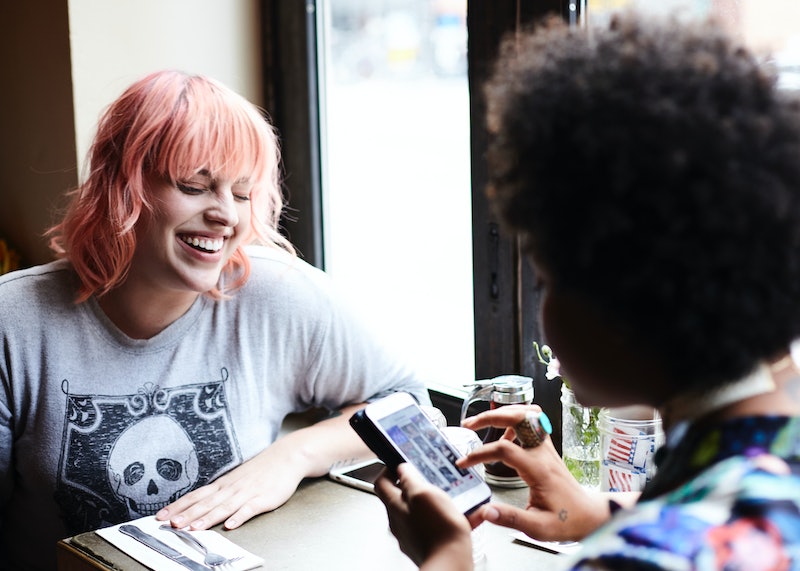 Meeting someone for the first time can be a nerve-racking experience. You try to find similar interests and hope they're just as weird as you. But within the first few minutes of meeting someone, they're probably judging you to see if they like you. While you don't ever want to be judged, people (including yourself) do it to figure someone out. It's like picking a bottle of wine based off the design of the label and the description (don't lie, you do this, too).

"Animals constantly judge each other and when you know how they do it you can easily see how it works in humans. Animals check each other out because the animal brain keeps seeking ways to stimulate the good feelings of dopamine, serotonin, and oxytocin, and to avoid the stressful feeling of cortisol. Dopamine is stimulated when you approach a reward, so the animal brain is always asking 'can you help me get a reward.' (For example, a lion deciding when to hunt alone and when to hunt with an ally.)"says Loretta Graziano Breuning, Ph.D. in an interview with Bustle over email.

While Breuning explains the scientific reason behind why we judge, there are plenty of ways on how we do it. Here are seven ways people judge you when they meet you for the first time.

How you decide to communicate with others can influence how they will feel about you. Some might believe you're more authentic if you're open about your life, while others might think you're just looking for attention. "People will surprisingly and interestingly judge for your speech patterns. Some people will love if you drop the 'F' bomb and consider you 'real,' while others will look down upon you for it," says zen psychotherapist and neuromarketing strategist Michele Paiva in an interview with Bustle over email.

2. The Clothes & Colors You Wear

While you probably were taught to dress for the job you want, you probably didn't know that the type of colors you wear impact what others think of you as well. "Income, political affiliation, and age can be assumed by shoes according to the research. The color of the clothes you wear can also create impressions. For example, lighter tones are perceived as friendliness. Darker tones are perceived as authoritative. A person wearing blue is perceived as having knowledge, power, and integrity," says licensed clinical psychologist Dr. Kim Chronister in an interview with Bustle over email.

3. How Often You Check Your Phone

Even though the thought of not having your phone on you is completely terrifying, constantly looking at your phone during a first encounter (or any conversation, really) is pretty rude. People might not trust you if they feel like they have to compete with your phone. "Research shows that pulling out your phone during a conversation lowers the quality as well as the duration of the interaction," says Chronister.

4. If You Have Repetitive Nervous Habits

Bite your nails often? Can't stop touching your hair? Pick your face? All of these things are highly noticedable by others. People might believe you're nervous or anxious and may even lack self-confidence. "Fidgeting is perceived as being nervous even if the person is fidgeting as a result of simply being under-stimulated (bored)," says Chronister.

5. How Often You Talk About Yourself

While you do want to find commonality between you and the other person, you don't want to redirect every conversation back to you. Opt to ask your new friend questions and inquire about their life. People will notice if you always talk about yourself and wonder if that's the only thing you care about. "People who speak mostly about themselves and do not ask questions are perceived to be self-absorbed," says Chronister.

Ever looked at someone you've just met for the first time and wondered why they weren't smiling? Maybe they have spinach in their teeth or they're bored with the conversation. Either way, how you choose to express yourself can determine how your first encounter with a person will go. "In the first few seconds, we are completely judgmental and analyzing many things about that person. Is she/he smiling? Is she/he looking at me in the eyes? Do I feel connected to this person? These first few moments are not happening on a conscious level — we're getting a sense of how we feel around this person and if these are positive or negative feelings," says Zangara.

7. If They Can Trust You

According to Business Insider, Harvard Business School professor Amy Cuddy said that people will judge you mainly to find out if they can trust you. "If someone you're trying to influence doesn't trust you, you're not going to get very far; in fact, you might even elicit suspicion because you come across as manipulative. A warm, trustworthy person who is also strong elicits admiration, but only after you've established trust does your strength become a gift rather than a threat."

While no one likes to be judged, it's simply a part of life. People do it to see if they can trust and respect the person they just met. So don't feel you're being analyzed the next time you meet someone. Enjoy their company and remember that they're just trying to get to know you!