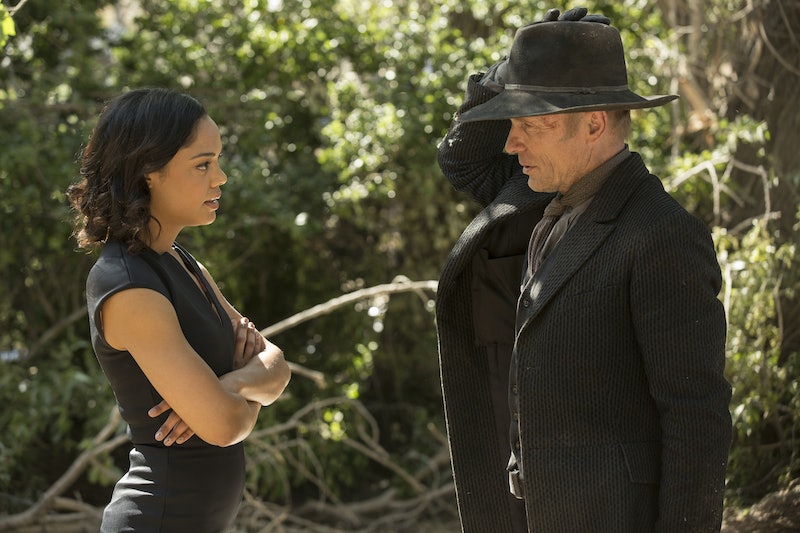 The Man in Black on Westworld is mysterious by his own design. He won't even let fellow guests thank him for his philanthropic service. However, the cracks are showing, and his place in the mythology of the show is becoming more and more clear. Is Charlotte Hale the Man in Black's daughter on Westworld ? The girl who blamed him for his wife's suicide, saw through his meek exterior outside of the park, and effectively lead him down this maze-obsessed path could have an agenda of her own.

Charlotte's about the right age, would likely be invested in the park as a member of his family. Now, the Man in Black did tell Teddy that his daughter's name is Emily. He also told Teddy that the "Big Bad" Wyatt had kidnapped Dolores, which just isn't true. He's manipulating Teddy and only letting the host know exactly what he wants him to. If he knew that Charlotte was on the premises and could interrupt his mission at any time, it's possible that he could have lied about her name to keep people in the park from knowing their relationship. Maybe the Man in Black is a Brontë sister fan.

I suppose that she could also be Arnold's daughter, but while it would be particularly cruel to give Bernard a dead son named Charlie while his living daughter was still around, I don't think that Ford would risk allowing any of Arnold's family near the park. Here are some clues that point towards her being related to the Man in Black instead.

They Know Each Other

As evidenced by their scene in Episode 9, Charlotte and the Man in Black have clearly met before. Their relationship is not great, but not antagonistic either.

So, a few parts of my theory presume that William is the Man in Black. Tessa Thompson looks just enough like Logan's sister and William's fiancé Juliet to get me thinking.

Doesn't Charlotte strike you as a little Logan-esque in the way that she treats the purpose of the park and its employees? Or, at least, the way she treats Hector. It would not surprise me if Ben Barnes' antihero character was her uncle.

Finally, if the Man in Black is William and Charlotte is his daughter, than that would make his full name William Hale. Why is that relevant? It's a fitting name for the mysterious character. There were several significant people named William Hale in history that could provide insight to the character. The first is a murderer known as the King of the Osage Hills, who cheated his way to the top and was the subject of one of the first FBI undercover operations in the 19th century. Another William Hale in the 19th century, the period that Westworld is trying to emulate, invented rockets that were used in the Civil War and the Mexican-American War. There was also a film director named William Hale who made several notable Westerns. The fact that someone with this name both lived and recreated the Old West seems like a major clue.

You'll have to take my word for it if this turns out to be true, but the second that Ed Harris' character said that he had a daughter in Episode 8, "Trace Decay" I had a hunch that it was Charlotte. The evidence just keeps stacking up, and I have a feeling that Charlotte and the Man In Black's connection to the park and to each other will be revealed in the Westworld Season 1 finale.