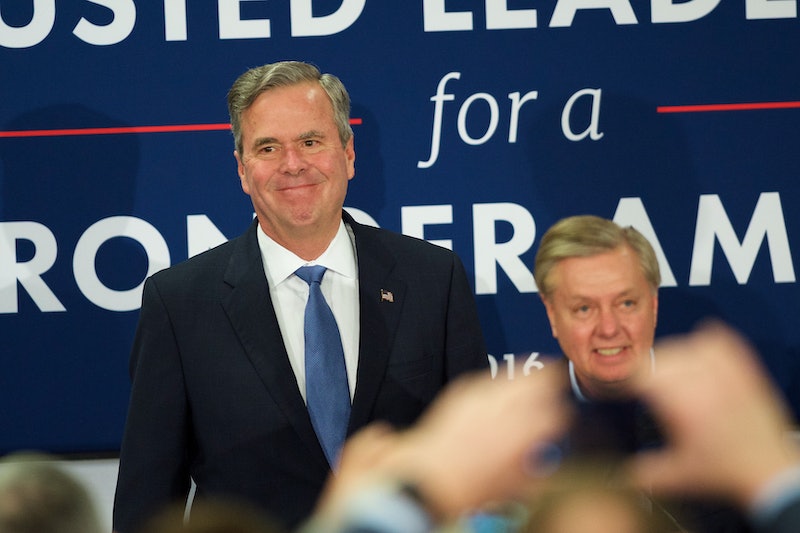 Millions of Americans are already looking forward to the next presidential election, and at least one segment of the Internet has already figured out their perfect candidate — Jeb Bush. A Facebook page called Jeb Bush 2020 reimagines him as the socialist hero of the future who will save America from fascism with his copy of Karl Marx's Capital and a Molotov cocktail.

The page comes complete with references to Jeb's best gaffes from the 2016 campaign, but the dankest memes are about the future, not the past. According to Jeb Bush 2020, Jeb! plans to fight for the proletariat, the downfall of capitalism, and gay space communism as top priorities in his presidential agenda.

The best part about this account is that it finally gives Bush a personality. He was the frontrunner very, very early in the Republican primary before voters got turned off by his quiet and subtle rhetorical style, which was obviously difficult to sell when he basically had the human version of Peter Griffin next to him. Even with millions in his war chest and the prestige of the Bush name, Jeb failed to inspire the Republican party and ended the 2016 campaign with only four delegates. However, his political aspirations may be reborn if he embraces the Marxist way, with 1200 comrades joining the cause since the page started on Nov. 20.

Obviously, this page is meant to be satirical, but don't mistake that for being unimportant. Memes will probably prove to be one of the most influential forms of political communication in the future of campaigning, particularly in communities just like Jeb Bush 2020. The organic and uncommercial nature of the group, which ostensibly arose without special interest prompting or even inspiration from a current event, is the type of community that retains and engages users in a way that few online communities can. It's the perfect opportunity for political campaigns to reach typically underrepresented demographics like millennials and encourage them to support their candidate and get out the vote.

There are obviously a few problems inherent with this model — campaigns will have a tougher time controlling messages, and it's difficult to send targeted communications to the community's membership without destroying the organic digital culture by which it became popular in the first place. However, that certainly doesn't mean no one will try. Hillary Clinton did this year to less-than-stellar success, indicating more that she didn't have the right formula than that she was completely off on the future of campaigning (there was probably a dose of sexism sprinkled in that rejection too). If someone is able to significantly profit from dank political memes, it could be the biggest development in political communication since the direct mailer.