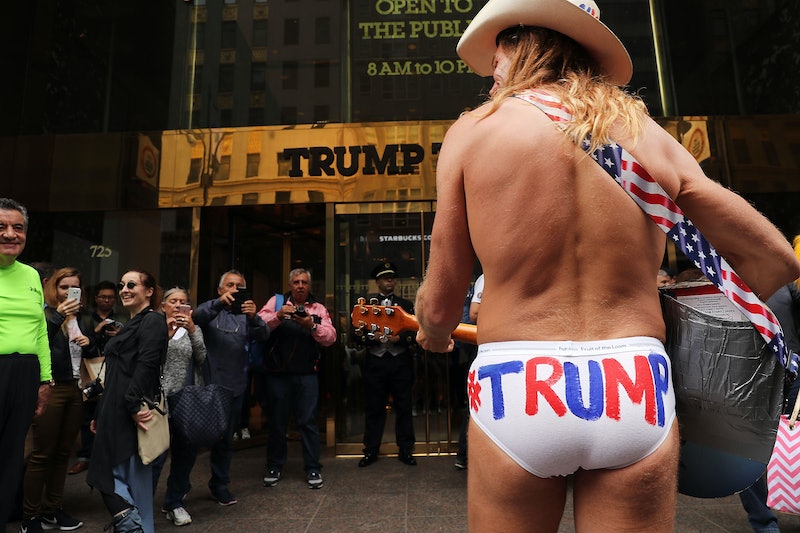 Good news! I've finally found something tackier than the all-gold elevators at Trump Tower. Tackier, even, than the gold Trump membership cards he sold during the campaign, and tackier than the $99 Make America Great Again baseball cap Christmas ornament that his campaign is selling now. Yes, boys and girls, it's finally happened: Thanks to our president-elect, the Naked Cowboy shared an elevator with a U.S. senator.

To answer the question any sane American would want to know first, no, he wasn't completely naked this time. The Cowboy, who made headlines in September as arguably the biggest celebrity to endorse Trump (seriously, unless you count Scott Baio), is an "entertainer" whose primary source of revenue is from tips garnered from playing guitar in his underwear in Times Square.

U.S. Senator Heidi Heitkamp's primary source of revenue, conversely, is advocating for her North Dakota constituents, though she appeared to be on her way to meet President-elect Trump at the same moment as the Cowboy. Reuters reported Thursday that Trump is allegedly considering Heitkamp for a cabinet position as interior or energy secretary.

I wonder which position he's considering the Naked Cowboy for. Maybe secretary of state? Perhaps, he'll give Mitt Romney or Rudy Giuliani a run for their money(maker).

One has to assume that the Naked Cowboy definitely had a lot to talk about with Trump — and they actually have a fair bit in common. For one, both men are richer than their taste might imply: The Naked Cowboy reportedly makes about $150,000 per year, according to Time's Money. Also, both men seem to love a good old-fashioned lawsuit. The Naked Cowboy won an undisclosed sum in a settlement with Mars in 2008, and another trademark suit, this time against CBS's The Bold and the Beautiful , was dismissed in 2012.

Heitkamp seemed to have a sense of humor about the whole experience. After the fact, she tweeted, "Cowboys are my people — even if they aren't from ND."

Even so, we can only wonder what the senator and the Naked Cowboy discussed on their way up to Trump's penthouse — which, for the record, isn't tacky at all, nope, not even a little bit. Fleece-lined cowboy hats? Energy policy? Heitkamp's continued refusal to stand firmly against the Dakota Access Pipeline? Sadly, we can only speculate.