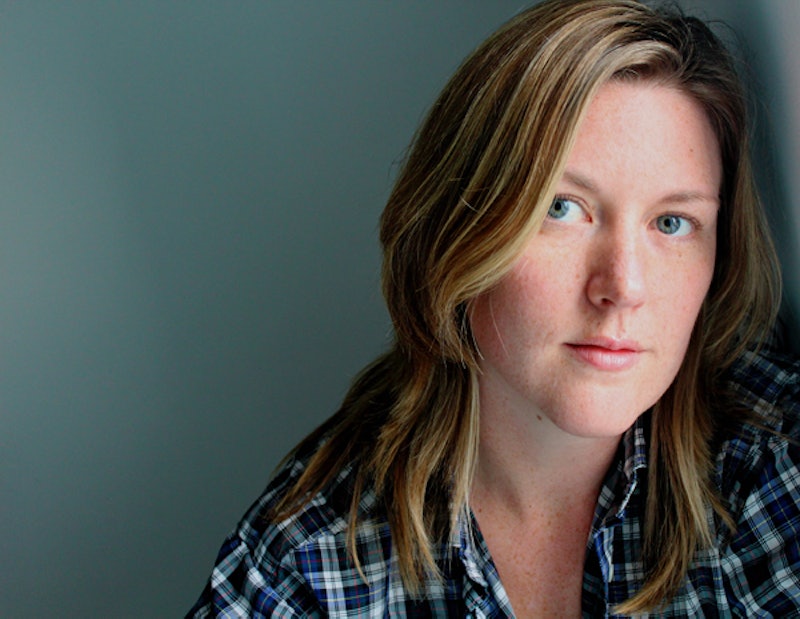 The arts of dance and writing seem separate enough, but in her second novel, Astonish Me (Knopf), author Maggie Shipstead assumes all the precision, grace, and poise of a professional ballerina. Shipstead proved her aptitude with 2012's Seating Arrangements, and in Astonish Me, she has choreographed the melodramatic and poignant narrative of one ballerina, Joan, who must leave her career. When the book opens, Joan is pregnant after a fling with her high school friend, Jacob. Confronting the fact she will never be more than just one of many corps dancers, Joan leaves dancing and raises her son with Jacob. Shipstead then takes us back a few years to Joan's role in assisting the defect of a famous Russian dancer, Arslan Rusakov, and their ensuing romance. When Joan's son exhibits a remarkable aptitude for ballet, Joan feels herself lulled back into the dancing world and Arslan's orbit, with all its leaps and pitfalls.

Throughout, Shipstead spins her characters with deft psychological insight and keen, pervasive observations of the behind-the-curtain world of professional ballet. We spoke with the author about how she crafted Astonish Me and what keeps her on her toes as a writer — oh, and her advice for Hannah Horvath.

MAGGIE SHIPSTEAD: I'm very interested in the practices of different kinds of artists and how they encounter their own limitations. And ballet in particular is very outside my experience: It's so physical, so collaborative, so dynamic. Dancers' careers are so short, and the way they interact with each other is so intimate. And so I was really attracted to the vulnerability of that kind of career. You can work as hard as you possibly can, and you just might have physical limitations that put limits on you, or you can have all the talent in the world and be catastrophically injured at any moment. So it's so different from my life, and that's a big part of the attraction.

There's certainly a lot that's vulnerable about writing, but I think the criticism that dancers get is qualitatively different from what writers get. So much of how your writing is experienced in the world is through criticism, especially now, it seems, with feedback from Amazon reviews. I think that kind of feedback is less important for dancers.

You wrote much of this book while you were in residence at the Cité Internationale des Arts in Paris. Joan, your protagonist, makes a great observation at one point that the city has a feeling of waiting and anticipation. Is that how you felt when you were living there?

From time to time. I think it's one of those places where it's difficult to feel like, "Yes, I am taking the full advantage of living in Paris." It always seems like you could be encountering more of the city and seeing more beauty and participating more in the life of it. I often felt like my shyness about my poor French and my general reticence of being a tourist — I often felt the fear of missing out.

The novel starts in 1977 and then jumps back to 1970. How'd you decide to play with this chronology? Do you work from an outline, or did you sort it out as you went?

I didn't outline. I pretty much never outline, which is a flawed process. It started as a short story that I couldn't really make work, and I kind of just started to expand it. I started with the beginning still as the beginning of the book, and I wrote forward in time until I got to a place where I felt there was a piece of information that was missing. Then I jumped back in time and dramatized it. Because it was in the present tense, it made more sense to do it that way as opposed to using flashbacks. Actually, the chronology that came out of that — which is the version that my publisher bought — was a little bit more fragmented than the way it is now. So it used to jump back and forth even more quickly, which I was told was confusing [laughs] and in retrospect, I think really was confusing. So it was just this internal logic of needing to answer questions within the narrative.

I was struck by how different the tone of this novel is from that of your first book, Seating Arrangements. Do you match your tone to your story, or the story to the tone?

It's almost hard to remember, because it started as a short story. I think the tone isn't so much related to the plot as it is the subject. Part of what I was trying to do was replicate or pay tribute to the tone of classical ballet. There is kind of that restlessness and a little bit of melodrama that came from wanting to recreate that experience of being in the theater and watching something.

What kind of research did you do for your descriptions of the movements and the details of the dancing?

I've been going to the ballet since I was a little kid. I've always been a fan, and my mom is very knowledgeable about ballet, so I had a basic starting knowledge. I wasn't really starting from scratch. But I had a big hardback reference book that I carted around with me everywhere for months that had photographs with all the names of the steps, and that was really helpful, because when you're watching someone in motion or watching a video, it can be really difficult to isolate the individual steps. So that was helpful in getting a handle on the terminology.

Do you have a favorite ballet?

It's probably Swan Lake. I don't really have very esoteric ballet taste, so I really like the ballets with Tchaichovsky scores. So Swan Lake and Sleeping Beauty and The Nutcracker. Giselle is not Tchaichovsky, but I like Giselle as well. All the classics.

You graduated from Iowa Writers Workshop. What were some of the most important things you learned about your writing process there?

When I got there, I had just turned 23 and I really hadn't written very much. I had written 7 or 8 short stories in college. That was really it. Even when I got there I didn't think that writing was really a viable career at all. Probably the most important thing I came away with was confidence and seriousness about what I was doing.

There's this endless conversation about whether or not MFAs are worthwhile. There are things they teach us in workshops that expedite your learning curve. Just getting a better understanding of point of view and how your language should match your character's point of view — that sort of thing. I wouldn't have worked that out for myself, in quite those terms, and certainly not as quickly. So I felt that it really accelerated the learning curve.

...I didn't know what to do with myself. I had had an office job after college, and I needed time and money to write. Iowa City's a cheap place to live. I'm intensely grateful for it.

Do you watch Girls?

I do! I haven't watched the third season, but I heard what happened.

I was wondering if you had any advice for the fictional Hannah as she presumably embarks on the road to an MFA.

[Laughs] Hannah should think carefully about how she structures her time. I think that's a big problem for everyone: showing up and all of the sudden having massive amounts of unstructured time. Although, I guess, to be fair, it doesn't seem like her time is very structured to begin with.

Agreed. What are you most itching to read next?

I'm really excited about Patrick St. Aubin's new novel [Lost for Words]. I've read his five Patrick Melrose novels, and this is the first one about different characters. ... I already read the galley, but there's this book that comes out in August called 2 A.M. at The Cat's Pajamas. I really enjoyed it. It's about a little girl who really wants to be a jazz singer, and it all takes place on one night, and the characters encounter each other around Philadelphia.

What's next for you, writing-wise?

I have a bunch of stories I want to finish. I haven't really written stories since I was at Stanford, and that's kind of bugging me. I started a new novel, which I've written 100 pages of, but there's a lot more to do, so I won't be finishing that any time soon.