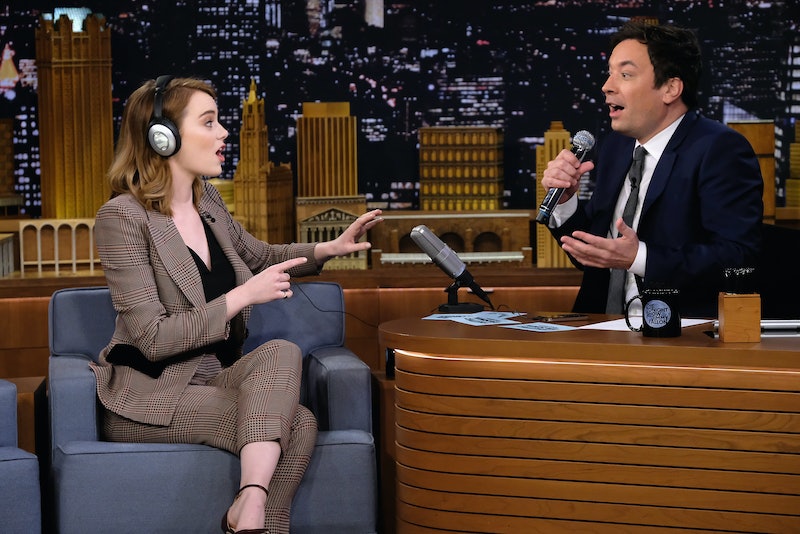 In case you missed one of the most noteworthy events on Friday, The Hamilton Mixtape was finally released and boy, oh boy, it is a thing of beauty. We've been getting delicious bits and pieces of the mixtape for a while now to prepare us for this glorious day. First came "It's Quiet Uptown," then "Immigrants (We Get The Job Done)," and finally we were getting inundated with songs, including "Helpless" and "Satisfied." But there's one song that features a guest performer more notable for his late-night hosting chops than his musical ones, and that's the track the I'm most interested in analyzing. Did Jimmy Fallon really sing on The Hamilton Mixtape? Yup, and you're about to be impressed. Fallon sings the pants off of "You'll Be Back" and makes it one of the more light-hearted, amusing tracks on the album.

At four minutes, the track is over twice as long as the original, serving as a showcase for both Fallon's pipes and his chance to give an explanation about why he's actually singing for The Hamilton Mixtape. In the intro, he says, serio-comically, that he's "not a Broadway star, but I am classically trained. And by that I mean I was trained by vocal coach Ed Classically. He works out of his mother's basement in New Jersey and he actually has this breathing technique." Naturally, Fallon's joking about his musical training. It's nice to see he was able to get a bit of his trademark wit in before his spoken dialogue fades out and in comes his cheeky rendition of "You'll Be Back."

"You'll Be Back" is probably the most musical-like song in Hamilton, veering back into traditional song territory and away from Hamilton's hip-hop lyricism. Sung by King George III in the show, the song is the king's warning to Hamilton and his band of revolutionary founding bros that running a country is no easy feat and that going to war might serve as a reminder they need the king to survive. It's a dark message juxtaposed against a very chipper score; in Fallon's funny hands and with quirky inflections that hit on those darker notes, it's a perfect track off The Hamilton Mixtape.

Anyone who's seen even a clip from Fallon's late-night television show knows that he's always ready to sing. Whether its doing the Singing Whisper Challenge with Emma Stone or singing with bestie Justin Timberlake, Fallon's always been game to get musical. "You'll Be Back" is a great addition to Fallon's résumé and kinda makes me wonder whether he shouldn't just put out an album already. Why not?