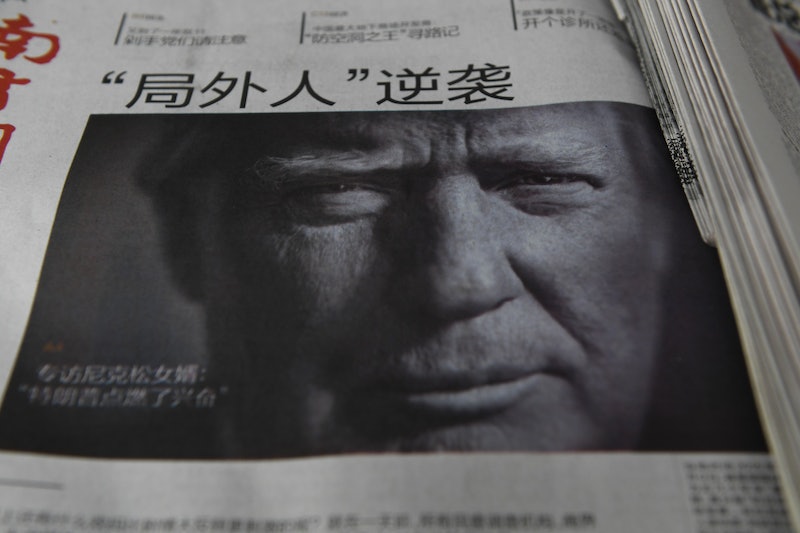 In the latest instance of having a potentially damaging phone call with a foreign leader, President-elect Donald Trump sparked controversy by speaking to the Taiwanese president on Friday. News of the call prompted a quick reaction from China — initially Chinese Foreign Minister Wang Yi dismissed the phone call as a "petty trick" on Taiwan's side, but China's Ministry of Foreign Affairs lodged a formal complaint hours later. Trump has been criticized for breaking with U.S. policy regarding China, Taiwan, and the "one-China policy."

The policy states that the People's Republic of China (usually referred to as simply "China") and the Republic of China (known as Taiwan), are one country. Both China, which still operates under a communist government, and Taiwan, which is ruled by a democratic government, agree on the existence of one China. The issue is that both sides insist on being the legitimate China.

In a statement issued on Saturday, Geng Shuang, spokesman of China's Foreign Ministry, said, "We urge the relevant side in the US to adhere to the 'one-China' policy, abide by the pledges in the three joint China-US communiques, and handle issues related to Taiwan carefully and properly to avoid causing unnecessary interference to the overall China-U.S. relationship."

The three communiqués Shuang refers to were released in 1972, 1979, and 1982. President Nixon and Chairman Mao Tse-tung spoke multiple times, eventually leading to the release of a joint statement endorsing the one-China policy. "[A]ll Chinese on either side of the Taiwan Strait maintain there is but one China and Taiwan is a part of China," it read. "The United States does not challenge that position."

In 1978, meetings between President Jimmy Carter and Deng Xiaoping culminated in the official establishment of diplomatic relations between China and the U.S. The U.S. recognized Beijing as the only legal government of China, effectively breaking diplomatic ties with Taiwan. China and the U.S. signed a third communiqué in 1982 in which the U.S. agreed to decrease its sales of weapons to Taiwan and in which it affirmed having no intentions of creating two Chinas.

Trump's conversation with President Tsai Ing-wen is believed to be the first time an American president spoke with a Taiwanese leader since 1979. While the U.S. maintains a relationship with Taiwan through semi-official institutions such as the American Institute in Taiwan, Trump broke U.S. policy by speaking to the leader of a country the U.S. has severed diplomatic ties with.

There are conflicting accounts of who arranged the talk between Trump and Tsai Ing-wen. The president-elect took to Twitter to insist the conversation was a simple congratulatory phone call for his presidential victory. However, the Taipei Times reported that the call "was arranged by Taiwan-friendly members of [Trump's] campaign staff after his aides briefed him on issues regarding Taiwan and the situation in the Taiwan Strait."

A spokesman for the Taiwanese president characterized the phone call between the two presidents as a possible beginning for renewed relations between the U.S. and Taiwan. "During the talk yesterday, President Tsai and President-elect Mr. Trump not only had a friendly talk greeting each other, but also shared their views on a few points about future policies, especially enhancing local economic development, strengthening national defense, including providing better living and security to Taiwanese people," said the spokesman. "The president also expects that the Taiwan-U.S. relationship could be strengthened on bilateral interaction so that stronger ties could be established."

Questions about Trump's motives have since arisen; a representative for the Trump Organization reportedly made a recent visit to Taiwan expressing the company's interest in building hotels in Taoyuan City. According to Taiwan News, "A woman working for the Trump Organization came to Taoyuan in September, declaring the company’s investment interest in Taiwan’s Taoyuan Aerotropolis, a large urban planning development project surrounding the Taiwan Taoyuan International Airport."

In the meantime, the Obama administration has reaffirmed the United States' commitment to the one-China policy.