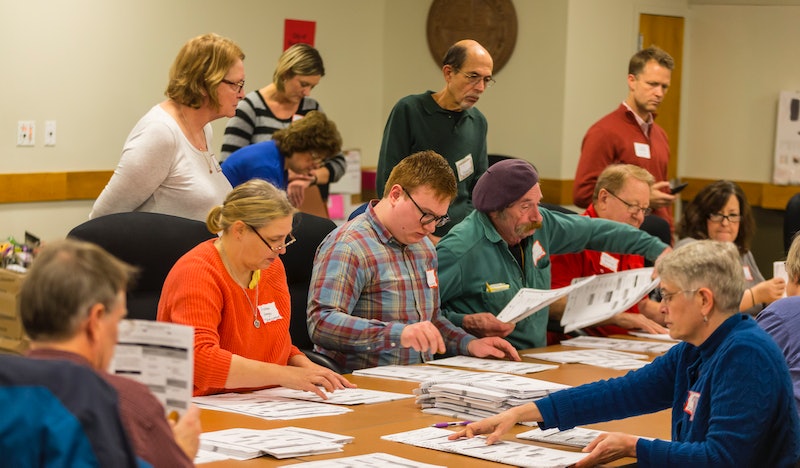 The electors of the Electoral College meet in their respective states on Dec. 19 to officially cast their votes and formally elect the president of the United States amid talk of rigged voting, recounts, and faithless electors. Groups of these so-called faithless electors have pledged to vote against Donald Trump even though they initially vowed to vote for the Republican candidate. How many faithless electors does Hillary Clinton need to win the election and steal Trump's president-elect status? The former secretary of state will need a full-blown revolt.

There are 538 electors in the Electoral College, and the magic number for a presidential candidate is 270. On Election Night, Trump easily surpassed that number. The final tally was 306 Electoral College votes for Trump and 232 votes for Clinton.

Electors usually vote the way their state does, so ideally, Trump would claim all 306 Electoral College votes. However, electors do have the constitutional right to vote for another candidate. When they do so, they're called "faithless electors."

The Denver Post reported this week that a group of faithless electors in Colorado, who call themselves the "Hamilton electors," started a fundraising committee to persuade other electors to vote against Trump. The group's hope is that they will cause a deadlock and take the presidency away from Trump. According to The Denver Post, just four electors in Colorado and several in Washington have joined the group.

Is that enough to sway the Electoral College away from Trump? Hardly. But this group of faithless electors doesn't necessarily want to elect Clinton, either. The Denver Post reported that the funds raised won't support any particular candidate. And as Politico pointed out, most of these faithless electors in Colorado and Washington are former Bernie Sanders supporters.

Is it possible? Sure. Is it likely? Well, no one is that optimistic about it.

However, a revolt among the electors could also lead to a new investigation into the necessity of the Electoral College. "I do think that a byproduct would be a serious look into Electoral College reform," Michael Baca, the faithless elector in Colorado who formed the "Hamilton electors" group, told Politico.

A deadlock would surely send a message, but it wouldn't automatically send Clinton to the Oval Office.