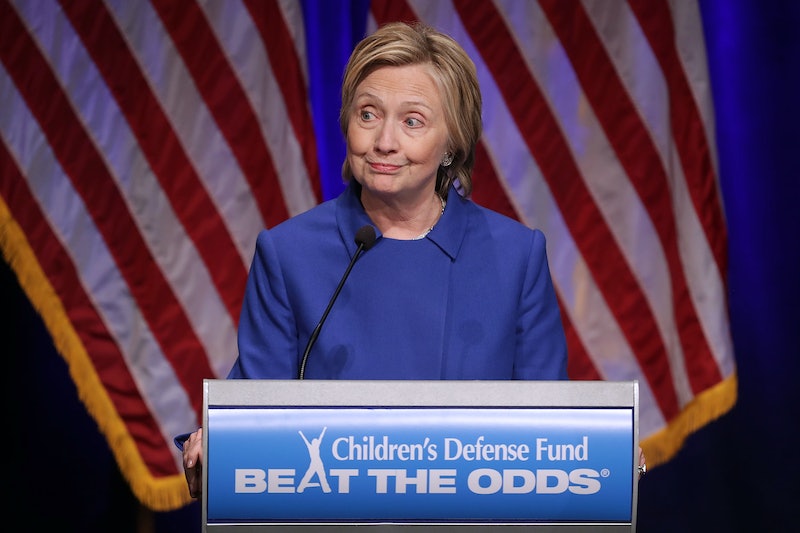 Former Secretary of State Hillary Clinton has been noticeably absent from the public eye since conceding the presidential election to President-elect Donald Trump last month. But she has been spotted by locals while on a hike in upstate New York and in a bookstone in Rhode Island. Saturday Night Live spoofed these sightings in a hilarious way. In a parody of those nature hunting shows, SNL 's "The Hunt For Hil" sketch shows just how much the former Democratic candidate has been missed in the public eye. In the sketch, the two "hunters" say their goal is to "catch her, trap her — and thank her," because she is the "most elusive legend of them all."

The two men interview a woman about her sighting of Clinton, spotted as the woman washed her dishes and looked out the window. "It seemed like it wanted some time to itself, so I went after it," the eyewitness says to them as a clip plays of her, chasing after Kate McKinnon's Clinton while shouting, "Hillary, wait! I just want to thank you!" The two hunters try other tactics to lure Hillary out of hiding as well. They call her with McKinnon's Clinton impression laugh, which laughs back at them in the woods, but does not offer them any visual confirmation.

They also leave her a piece of bait: an article about Jill Stein's recount in Wisconsin. They do not catch Clinton with it, but they find evidence that she did make an appearance and read the article — Clinton left the note, "Thank you - H" written in the margins. Finally, the two men bring in a "tree whisperer" to, well, whisper to the trees and ask them where in the world Hillary Clinton is. His answer: "She's buying eggs at a grocery store."

Join the search for Clinton and laugh along in the clip below.