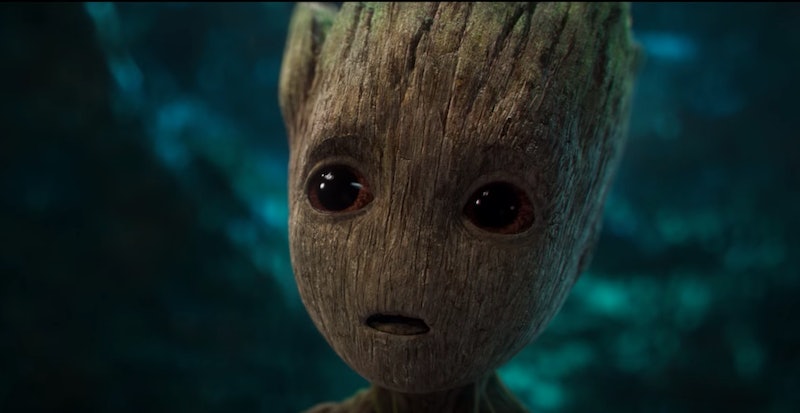 So sure, the brand spankin' new Guardians of the Galaxy Vol. 2 trailer is full of action, intrigue, thrill, and awesome special effects. But I'm here to tell you that while that's all good and entertaining, somehow none of it is as great as Baby Groot's appearance admidst the chaos. If you thought that the tiny plant-like superhero's popularity was a one off thing, you're very mistaken. In the Guardians 2 trailer, Baby Groot totally steals the show and proves that he's just as cute as he is unfailingly mischevious.

First things first, I'd be remiss if I didn't mention Star-Lord, Gamora, and Drax's badassery in the trailer. I mean, with Star-Lord effortlessly swerving through the galaxy through a considerable amount of dastardly debris and Gamora attacking larger-than-life bad guys without a second thought, it's readily apparent that they've only improved upon their skills since the first installment. But, while their superhero-y stunts are cool and all, Baby Groot's inability to follow Rocket's explicit directions is somehow even more captivating.

You see, Rocket basically tells Groot in order to not blow everyone up, all he has to do is not press the gigantic red button that will detonate a bomb that will inevitably kill them all. But, it's not exactly a concept that the little guy easily grasps. Instead, he just repeats his signature "I am Groot" line with varying emphasises while his finger hovers over the button, and Rocket has an understandable conniption.

That isn't the only time Rocket and Groot don't see eye to eye, either. As Rocket and Star-Lord argue over borrowing a piece of tape to cover the "death button," Baby Groot makes a great escape with the detonater that holds said "death button." Which, you know, may be be a slight hindrance to the whole saving the galaxy thing. But, that's not to say Baby Groot doesn't have his heroic moments. He's also shown taking charge (literally) and swiping out a bad guy with his retracting roots — proving that while he may be slightly unruly, the character's bravado does pay off.

More like this
Meet The Disney Imagineer Bringing 'Guardians Of The Galaxy' To Epcot
By Charlie Mock
'Avatar 2' Now Has A Teaser Trailer & Release Date
By Jack Irvin and Alyssa Lapid
The 'Hocus Pocus' Sequel Finally Has A Release Date & It Makes Total Sense
By Shannon Barbour and Radhika Menon
What Does Doctor Strange’s Third Eye Mean?
By Arya Roshanian
Get Even More From Bustle — Sign Up For The Newsletter