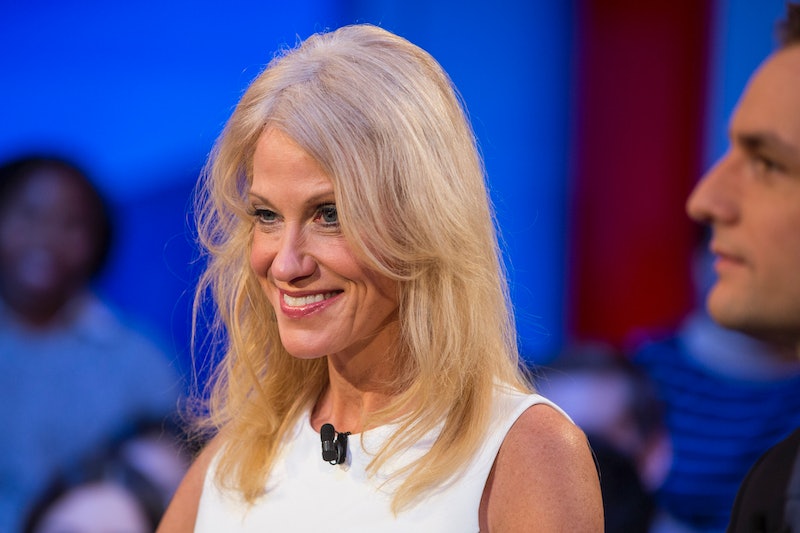 A full month after the presidential election, the shock of Donald Trump's win still hasn't quite worn off, but campaign insiders and journalists are starting to break down all the factors that lead to his electoral victory. According to Trump's final campaign manager Kellyanne Conway, one of those factors was not the candidate not faced. Conway told CNN's Jake Tapper that Bernie Sanders helped Trump win the presidency by inspiring fierce loyalty within his supporters during the Democratic primary and thereby reducing enthusiasm for Hillary Clinton.

"I'd also like to publicly thank Bernie Sanders for his effect on our campaign, because he softened up Hillary Clinton. He won 22 states and 13 million voters, and that ain't nothing," Conway said during the interview with Tapper on State of the Union, alongside Clinton campaign manager Robby Mook. "And then worked hard to deliver them for Hillary Clinton, I will add, worked very hard," said Mook, jumping in to defend Sanders' efforts for Clinton.

While this isn't the first time that a political operative or campaign insider has given this opinion, it's very interesting to hear it come from Conway, who likely has campaign information that never made it out to the public. It's unclear if any private polling showed the extent to which Clinton lost out on Sanders supporters' votes, but the Bernie or Busters maintained active and engaged online communities through the election. Other journalists have also stated that the unenthusiastic Democrat was overlooked this year, which also could suggest that Sanders inadvertently led voters away from Clinton.

Another surprising aspect of Conway's admission is that it doesn't grant the credit solely to Trump or the campaign she herself ran. Conway pretty much acknowledges that Trump lucked out by not having to face Sanders in the general election, or by having Clinton choose him as her running mate. Although circumstances might have shifted in between the last polling numbers and the general election, Sanders had a very strong lead over Trump in a hypothetical general election when registered voters were polled in April and May.

The concept that Trump didn't necessarily win on true merit but rather due to a series of lucky coincidences subtly delegitimizes his campaign and presidency, and it's a surprising idea to be coming from the very woman who led Trump to the finish line.

Conway's assertion that Sanders essentially lost Clinton the election obviously ignores lots of other factors like racial resentment, foreign interference, and the sexist hyper-focus on Clinton's emails. However, it still is an interesting factor that deserves more study in the future, at the very least to avoid another situation in which elevating the legacy candidate puts the party at risk for loss.