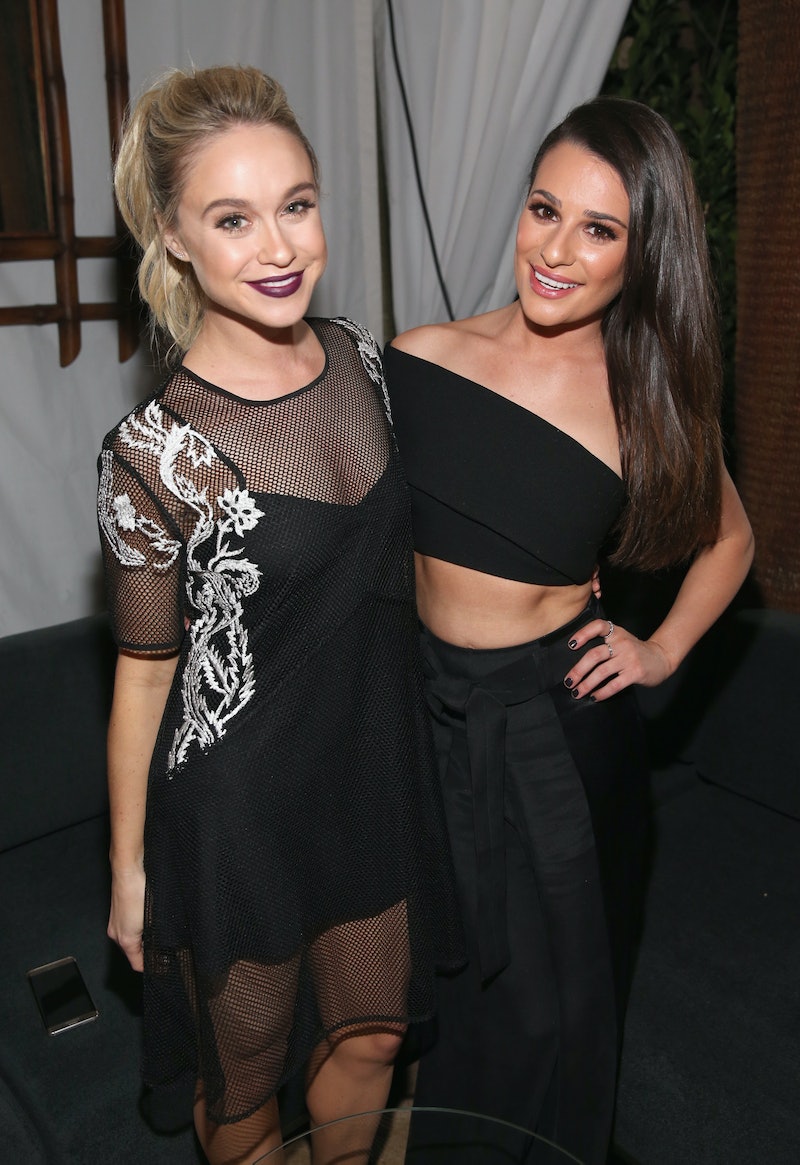 It's been over a year since Glee was last on TV, so it's nice to see that its stars are still such good friends. There have been quite a few mini cast get-togethers over the past few months, but Becca Tobin's wedding was a Glee reunion like no other. Instagram pictures from Saturday's event show guests and former Glee cast and crew members like Lea Michelle (Rachel Berry), Jane Lynch (Coach Sue Sylvester), and Kevin McHale (Artie Abrams) having fun together and posing for pictures at the wintery wedding.

Tobin, who played Kitty Wilde starting in the musical's show's fourth season, married Zach Martin, an entrepreneur on Saturday. The couple was introduced by mutual friends, and they got engaged back in May. Their wedding, which took place in Jackson Hole, Wyoming, looks like it was a beautiful and fun event. Tobin told Brides that she and her now-husband are big donut fans, so they chose a donut tower over a traditional cake. But the Glee aspects of the wedding are simply the best. Lynch officiated the wedding, while Michele did most of the documenting, posting a picture of herself, McHale, Lynch, Meg Doyle (a production assistant), Michael Hitchcock (executive producer), Jenna Ushkowitz (who played Tina), Matt Hodgson (writer), and Dante Russo (a production assistant) captioned "Glee wedding" to Instagram.

More wedding photos posted by Michelle and the rest of the Glee family show other wedding attendees, photos of the bride before her big day, and toasts to the happy couple. McHale even posted a video of himself sampling the donut tower.

The Glee cast and crew has demonstrated on other occasions that they've remained close. A lot of the cast showed up to celebrate Heather Morris's wedding, have fun at Amber Riley's birthday, and, strangely, pose together at the Sully premiere. One explanation for this continued closeness is that Ryan Murphy, who executive produced Glee, has kept much of the same group together in his other shows, American Horror Story and Scream Queens, so a lot of the gang never had to part in the first place.

While Tobin hasn't appeared in any ensuing Murphy productions, it's great that she's still so close with so much of the cast and crew. Tobin has since appeared on shows like Drop Dead Diva and co-hosted a podcast called The Lady Gang with Keltie Knight and Jac Vanek, during which she announced her engagement. Tobin joked about the proposal, saying, "We don’t have an extravagant story. I told him I would, like, castrate him if he did anything crazy. I really didn’t want, like, a thing, so it was, like, really perfect for me." Luckily for Tobin, the wedding itself looks like it was the perfect mix of tradition, silly irreverence, and old friends.

More like this
Lea Michele Recalls The Moment She Found Out She Was Cast In 'Funny Girl'
By Radhika Menon
Netflix Reveals First Look At Wednesday In The 'Addams Family' Spinoff Series
By Bustle Editors
24 Years Ago, 'Friends' Dropped Its Most Underrated Ross & Rachel Episode
By Grace Wehniainen
The 'Skins' Cast Shared The Reunion We’ve Been Waiting For
By Sophie McEvoy
Get Even More From Bustle — Sign Up For The Newsletter