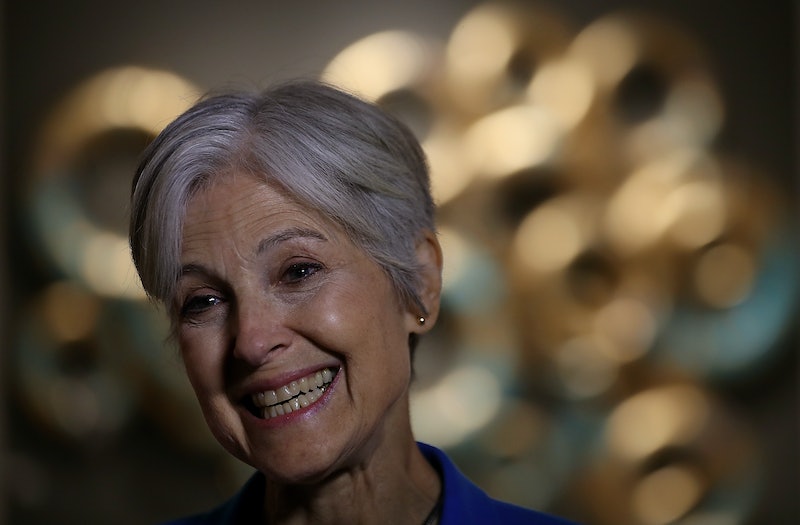 Although it's already been a month since the presidential election, the long shot efforts to prevent Donald Trump from assuming the presidency are still ongoing. Chief among those fighting to keep Trump out of the White House is Jill Stein, the Green Party candidate who initiated statewide recounts in three major swing states. One of those efforts in now in danger due to funding, but that doesn't mean Stein is giving up. Stein isn't dropping her Pennsylvania recount even due to unexpected costs — instead, she's promising to "escalate" it.

Stein initially decided to drop her efforts in Pennsylvania due to the cost taxpayers would have to incur — $1 million dollars per a state court ruling. According to Slate, the judge settled for a $1 million bond after Trump's lawyers pushed for $10 million. The Green Party declined to front the money, prompting Stein's attorneys to file court documents dropping the state lawsuit for the recount. "Petitioners are regular citizens of ordinary means. They cannot afford to post the $1,000,000 bond required by the Court," read the document that officially discontinued the pending case.

However, that doesn't mean Stein is done trying to confirm, and potentially change, the results of the election. Her next arena in this fight is federal court, where she'll seek a ruling for a statewide recount in the Keystone State. "On Monday the Stein campaign will escalate our campaign in Pennsylvania and file for emergency relief in federal court, demanding a statewide recount on constitutional grounds," Stein's attorney confirmed in a statement posted to Stein's official Facebook page.

As admirable as Stein's persistence is, the recount effort is so unlikely to change the reality of Trump's electoral win that it inspires natural questions about its practical utility. Statistics website Five Thirty Eight reported that only three statewide recounts in the last 15 years have resulted in a change of the results, and that each of those elections had much smaller vote margins than Pennsylvania, Wisconsin, or Michigan's in the presidential election.

That doesn't mean the process isn't cathartic though — the ideological rationalization for the recount is that it will at least reaffirm the legitimacy of the American electoral process, which suffered this year from the rhetorical tactics Trump utilized to claim a rigged system. It could help people who are still grieving Trump's win accept the legitimacy and prevent any lingering doubt from festering into resentment at the process.

Yet the mounting cost, exacerbated by the Pennsylvania state court ruling and now federal lawsuit, has caused some within her own party to denounce the recount. Even Stein's running mate Ajamu Baraka is not supporting Stein in her recount efforts, citing the length to which Stein is going to critique the vote, and the perception her efforts are inflicting on the Green Party. "The recount effort has resulted in serious questions regarding the motivations of the recount that threatens to damage the standing and reputation of the Green Party, its supporters and activists," Baraka wrote on Facebook last week.

Stein's intense dedication to the recount effort is very likely ineffective, but reassuring for those who want to see all avenues taken to avoid a Trump presidency. Stein raised nearly $7 million during the fundraising for the recount, nearly doubling her total fundraising from her presidential campaign, so this is obviously a cause that people really want to get behind. It seems the recount effort won't be over until every last option is exhausted, which may mean that the 2000 election repeats itself and Stein ends up before the Supreme Court.