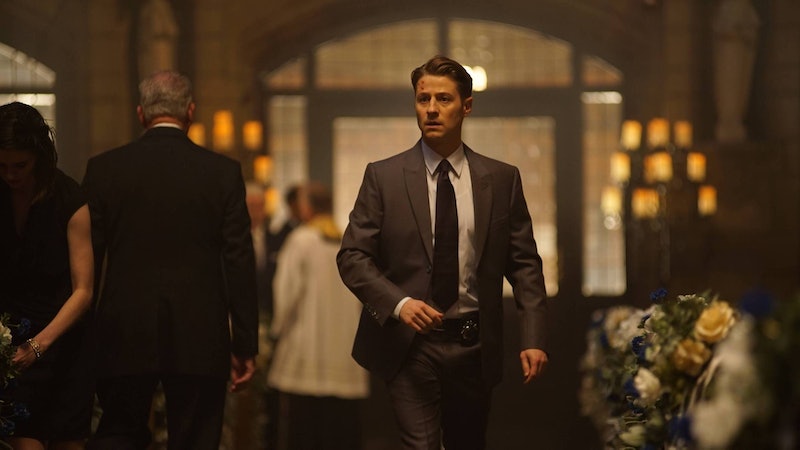 At the end of Gotham's Nov. 28 episode, "Beware The Green-Eyed Monster," fans might have been shocked to find out that the cliffhanger-laden episode was actually the fall finale. So when will Gotham Season 3 return after such an intense conclusion? According to its Twitter account, Gotham comes back on Jan. 16, 2017, which isn't a moment too soon. The third season has been the show's weirdest, and, if it is able to keep it up in the back half, could go down as its best yet. The midseason finale introduced a whole host of questions and hanging threads, and now Gotham has some time to pause and take a breath before returning to continue "Mad City," and reveal what happens when the Mad Hatter's plans finally come to fruition.

But there's actually a good reason to be excited for the winter hiatus. Yes, I understand that you don't want to have to wait to find out the answers to all of your questions. But these answers are going to make or break the season's direction, and Gotham is such a delicate balance between campy delight and, well, mess, that it needs to tread carefully when putting together its conclusion. Here are the biggest questions Gotham still has to answer when the show comes back in 2017 and can spend the hiatus plotting.

She was introduced briefly, but didn't get the chance to explain why exactly she's fighting the Court of Owls.

3. What Are The Court Of Owls Protecting?

That giant crystal or glass owl has to hold some kind of secret, but we still don't know why it's such a prized possession.

OK, only Bruce seems to care about this one, but hopefully he gets an answer soon so he can stop bringing it up every two minutes.

Mario contaminated the lab studying the virus, and multiple people suffering from the virus have been running around Gotham City. So far they've been unsuccessful at spreading it to everyone, but will there be an outbreak?

6. How Will Jerome Return?

Reports and trailers have confirmed that the character will be back in Season 3 after dying in early Season 2. Obviously, characters have returned from the dead multiple times throughout the years, but will it be Hugo Strange's experiments that bring him back? Could it be Alice Tetch's blood? Or maybe whatever it was that made a clone of Bruce Wayne or Kristen Kringle/Isabella?

The last time we saw Strange, he was heading off with Fish Mooney and her crew to hopefully help them find a cure for their poisonous powers. It's been a while since then, and it will be interesting to find out what happens when they return to the city to find it totally different.

It seems like she's still mentally a teenager, but most of the characters (except for the other teens in the cast) are treating her like an adult, including a very weird moment when Alfred was... kind of flirting with her? I'd like to get some clarification in the second half of the season as to how exactly she wound up aging 20 years, either logistically (something in the water?) or narratively (will she now be a mental adult and get up to some villainous behavior?).

At the end of the season, this will be the biggest question of all. Penguin's transformation from weaselly villain into bighearted antihero was a genius idea, and while the two are poised to begin a huge, city-altering feud, I still have hope that these two crazy kids will find some way to work it out and maybe, just maybe, become more than Gotham's most powerful pair of BFFs.