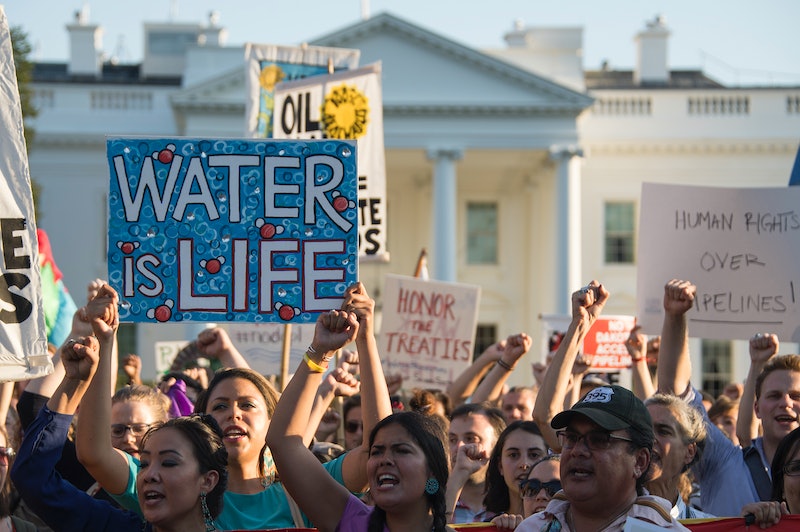 The United States Army Corps of Engineers (USACE) has reportedly denied the easement needed to continue construction of the Dakota Access Pipeline, in a major victory for Standing Rock protesters. According to a statement released Sunday by the National Congress of American Indians (NCAI), the USACE has denied the pipeline authorization to cross the Missouri River under Lake Oahe near the Standing Rock Sioux Reservation in North Dakota and will "study alternate routes."

News that an easement which would have allowed the pipeline to cross under Lake Oahe had been denied was confirmed Sunday by Jo-Ellen Darcy, Assistant Secretary of the Army (Civil Works). "Although we have had continuing discussion and exchanges of new information with the Standing Rock Sioux and Dakota Access, it's clear that there's more work to do," Darcy said in a statement released by the Department of the Army. "The best way to complete that work responsibly and expeditiously is to explore alternate routes for the pipeline crossing."

The USACE's decision to halt construction on the pipeline's current route comes as a major victory for demonstrators and members of the Standing Rock Sioux Tribe, who have been protesting the oil pipeline for months. "Our prayers have been answered," NCAI President Brian Cladoosby said in a statement Sunday. "This isn't over, but it is enormously good news. ... The Army Corps, the Justice Department, and the Interior Department deserve great credit for conducting a government-to-government consultation with Standing Rock and many other Tribal Nation Leaders."

The Standing Rock Sioux Tribe expressed similar sentiments Sunday in a statement praising the USACE's decision. "With this decision we look forward to being able to return home and spend the winter with our families and loved ones," Standing Rock Sioux Tribal Chairman Dave Archambault II said in a statement released by the tribe. Archambault said he hoped the decision to reroute the pipeline would be respected by both the the incoming Trump administration and Energy Transfer Partners, the company behind the Dakota Access Pipeline.

Energy Transfer Partners CEO Kelcy Warren had previously said the company would not consider rerouting the pipeline away from the Standing Rock Reservation. According to The Hill, Warren previously said the company would continue constructing the pipeline even if that meant they had to wait for President-elect Donald Trump, who owns stock in the Energy Transfer Partners, to take office and grant the easement.

"Treaties are paramount law and must be respected, and we welcome dialogue on how to continue to honor that moving forward," Archambault said. "We are not opposed to energy independence, economic development, or national security concerns but we must ensure that these decisions are made with the considerations of our Indigenous peoples."

According to Darcy, an Environmental Impact Statement with public input and analysis will be used in considering possible alternate routes for the approximately 1,172-mile pipeline.