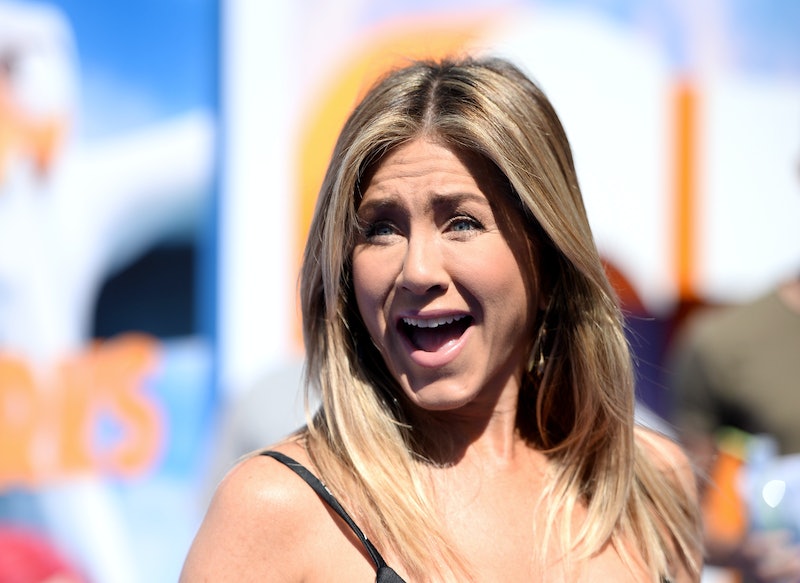 In a hilarious Weekend Update moment, Jennifer Aniston appeared on this Saturday's Saturday Night Live in order to ask Vanessa Bayer to stop doing an impression of her Friends character Rachel. While the two bickered in the sketch, the photos of Aniston fixing Bayer's Rachel haircut backstage are completely adorable and show their real-life bond. Bayer, who has portrayed Aniston's Rachel Green character since February, posted a picture to her Instagram captioned "real Rachel helping fake Rachel" of Aniston helping Bayer master her former character's signature haircut. Bayer also posted a super cute photo to her Instagram of the two stars holding hands. Unfortunately, Aniston didn't post any photos herself, because she famously eschews social media, but it's great to see Bayer capture the duo's bond.

The hilarious Weekend Update sketch started out with host Colin Jost asking "Rachel from Friends" to comment on the TV nostalgia trend. Bayer commenced her daffy "uh" and "well" and "oh"-filled impression of Rachel/Aniston until Aniston herself appeared at the desk. "Vanessa, what are you doing?" she asked. "Can you just drop that for a second?" They continued to banter back and forth, with Bayer shifting from her real voice to her impression, playing a person who was overly obsessed with Friends. Aniston's admonishment that "Friends was like five million and five years ago, so I think we've got to move on" served as a lighthearted barb at the many fans who have clamored for a reunion over the years.

Saturday Night Live and Friends have a long history together. Aniston has hosted it twice, in 1999 and 2004, and Bayer is not the first SNL cast member to impersonate Rachel Green. The sitcom was mocked in the popular 1997 "Friends" sketch, in which Cheri Oteri played Rachel and Matthew Perry played Joey, not Chandler.

Luckily, as these adorable photos show, the rancor between Bayer and Aniston is all in jest. At one point during her appearance, Aniston mentioned that she and Bayer are making a movie together, referring to the new comedy Office Christmas Party, out Dec. 9. So if you just couldn't get enough of the Bayer/Aniston dynamic on SNL, go to the movies to get a sequel of sorts.