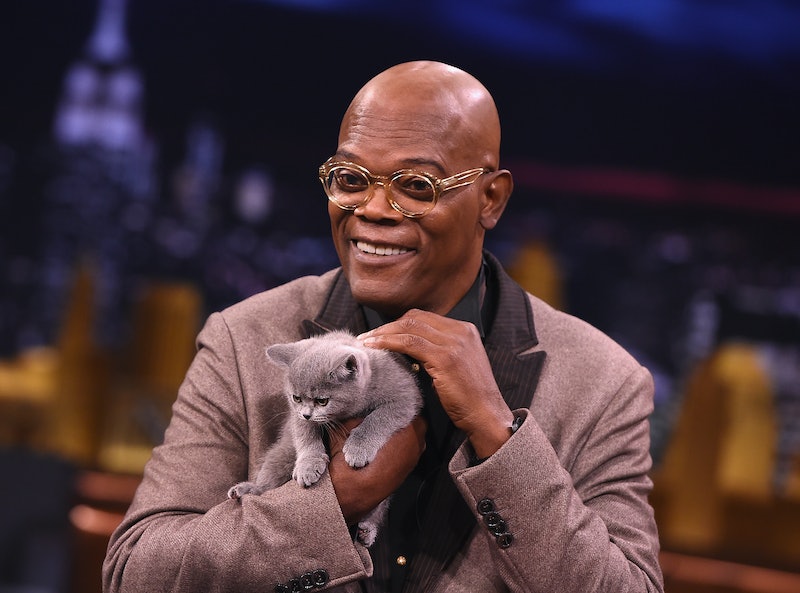 Have you ever tried summarizing the entire plot of all seven seasons of Boy Meets World? It's a difficult task for more reasons than one. Even if you stick to only the most important moments, it's still a bit of a muddled mess. Did Cory meet Topanga for the first time in Season 1 or has he known her since they were children? Have Cory and Shawn been best friends since they were in diapers or did they meet when Shawn pulled Cory out of an animal pen at the zoo? Is Eric pretty and popular or an idiot with great hair who can never win? What would the Eric Matthews of Season 1 think of the Feeny Call? Samuel L. Jackson cut through all the questions and got down to basics on Monday's The Tonight Show when Jackson performed a slam poetry summary of Boy Meets World .

Dressed all in black and with a cigarette in hand, Jackson's lyrical spin on the popular '90s sitcom manages to capture the best of the relationships on the show: their ups, their downs, their Feeny calls. It's all there, and it's all glorious. Here's how it went down.

"We see two boys that lack both brains and brawn," says Jackson, and no matter where you are in the series Cory Matthews and his "trailer trash" best friend Shawn Hunter constantly fulfill both criteria. Cory and Shawn had a lot of moments that proved the strength of their friendship, their complete inability to ever truly learn a lesson from their shenanigans, and, most of all, that it doesn't matter how different you are and where you come from. You can still achieve your dreams with a good friend at your side.

Who could forget the star-crossed lovers, Cory and Topanga Lawrence, "daughter of hippies, name of a gypsy"? Jackson references their very first kiss back in season 1, when both Cory and Topanga were sporting almost completely different personalities than the ones they would settle into in later seasons. It was the episode that launched a ship that would sail for 7 seasons and beyond. No matter how many times Cory and Topanga broke up and no matter who gave up on them as a couple — Topanga and Shawn included — Cory never did.

Although Season 1 spent most of its time setting up the mentor relationship between Cory and Mr. Feeny, later seasons would bring Eric Matthews to the forefront as the brother most in need of Feeny's guidance. They made a fantastic odd couple, with Feeny as the straight man to Eric's airheaded antics and the famous Feeny call gets a shoutout in Jackson's poem. "Feenay? Fe-hee-hee-heenay?!" indeed.

Never were there truer words spoken during the Boy Meets World finale than when Shawn and Cory stand up to point out "You know we're your favorites. You haven't even talked to another student for seven years." But those lighthearted moments aside, Jackson's somber tone perfectly captures the heart-wrenching scene when a lone Feeny stands in the classroom and says the final line of the series: Class dismissed.

Watch the full poem below.