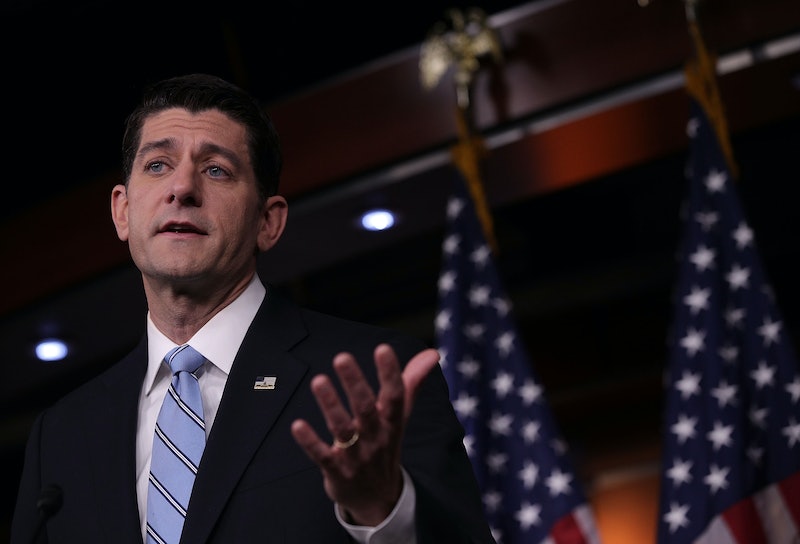 On Sunday evening, Speaker of the House Paul Ryan strongly criticized the recent DAPL announcement, which indicated that the construction of the Dakota Access Pipeline (DAPL) will be halted following months of protests by Native Americans. On his Twitter account, Ryan asserted that "This [the DAPL decision] is big-government decision-making at its worst. I look forward to putting this anti-energy presidency behind us." Ryan referring to the DAPL decision as "big-government" and "anti-energy" and seemingly using it as a platform to advocate for his long-held beliefs on these issues comes across as particularly insensitive.

Ryan's tweet clearly indicates his stance on the DAPL controversy as well as seemingly on broader issues regarding the prioritization of capitalism and business interests over other issues. Ryan characterizing the halting of the pipeline's construction as a "big-government" and "anti-energy" decision implies that he likely perceives the government as inappropriately intervening in private domestic oil industry actions.

These views seem to align with Ryan's public stances on both energy and governmental reform. In regards to the former, Ryan has long been an advocate of eliminating barriers, particularly those of a governmental nature, to domestic oil production. "The federal government has a clear role to play in preserving our natural resources and protecting the environment," he stated on his website. "However, I have concerns with several regulatory initiatives coming from the Obama administration that increase the costs of energy and have a devastating effect on job creation."

Ryan has also historically advocated against what he perceives as the government overstepping its authority, as well as against the size and scope of the federal government. His reference to "big government" in his DAPL tweet is illustrative of this mindset. Indeed, earlier this year Ryan proposed a set of policy initiatives know as "A Better Way" that included proposals to "reestablish and enforcing limits on agency authority," "reform the rule-making process," and "conduct more robust oversight of the executive branch," among others.

However, this response horrifically trivializes Native American rights and concerns. The Native American DAPL protesters have spent months fighting the construction of the pipeline to ensure the preservation of their ancestral lands as well as to protect their nearby reservation from a possible oil spill or leakage into their water source. During these months, they have endured harsh living conditions and, reportedly, ill treatment by law enforcement, who claimed they were responding to "riots" among protesters. Yet, protesters still persisted because of their strong belief in the ill-consequences that the pipeline could bring for their community.

Ryan has failed to acknowledge the plight of the protesters and the fact that DAPL is a Native American rights issue. Instead, he has cast the issue as one of big government attempting to impose its will on the domestic energy industry; this is, in my opinion, very disrespectful to a group of people who have perpetually had to struggle with ensuring protections for their land and rights, and who have paid a great price to ensure that these protections are guaranteed. The fact that the government is finally taking a step to ensure that these rights are protected (even though protesters and allies believe they should have done so sooner), is commendable and not overreaching. What Ryan espouses as "big government" is actually government playing the role it should — stepping in to protect its citizens when private industry fails to do so.