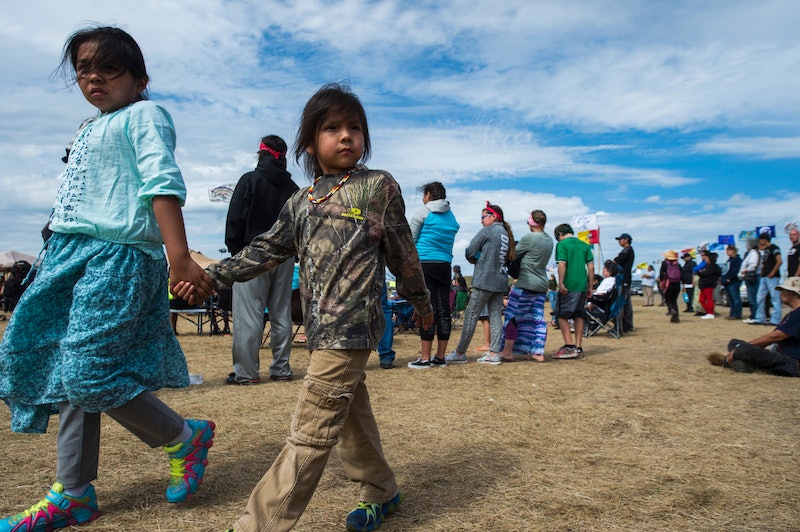 The Army Corps of Engineers announced Sunday that they won't allow the Dakota Access Pipeline (DAPL) to be built under Lake Oahe, an incredible victory for the Standing Rock Sioux and all of the protesters who've supported them over the months. But what will come next for DAPL? The answer isn't anywhere close to clear, but there are a number of possibilities.

The most immediate short-term effect is that the most controversial section of the pipeline won't be built, at least for the time being, as the Army explores alternative routes to link the existing segments of the pipeline. It's unclear how long this will take, but the statement released by the Army implies that it will conduct an Environmental Impact Statement (EIS) to assess the likely impacts of the project and any alternative routes.

Federal law requires that an EIS be carried out for all "major Federal actions significantly affecting the quality of the human environment." The process often takes years to complete, so it's quite possible that the alternative route — regardless of what it is — will be stalled for the next few years.

However, the company that's making the pipeline has a pending legal claim in court alleging, in essence, that the project has already gained the necessary approval to move forward. A motion to expedite this cross claim will be heard on Dec. 9, and it's possible that the court will override the Army's decision and allow the Lake Oahe segment to be built.

Even if the court sides with the Army, opponents of the pipeline aren't out of the woods just yet. President-elect Donald Trump supports the DAPL, which raises the possibility that he could try and reverse the Army's decision after he takes the oath of office. But while it's impossible to say for certain how such an attempt would unfold, Trump probably won't have the option of unilaterally ordering that the Lake Oahe segment of the pipeline be constructed.

We're getting into highly speculative territory here, so take all of this with a grain of salt. The EIS will likely be in progress by the time Trump takes office, and he'd have to halt it in order to build the pipeline. But because the EIS is a legal requirement under federal law, his administration would almost certainly be sued by the Standing Rock Sioux and environmental groups as soon as it attempted to pull the plug on the EIS. That litigation would have to make its way through the courts, which could also take years.

A lot of this will depend on how vigilantly Trump opts to push for DAPL. It's also possible that Congress will expedite construction of the pipeline by passing a law stating that, in effect, the EIS requirement doesn't apply in this case.

In short, it's simply too soon to say what the future of DAPL is. We'll just have to wait and see how the convoluted legal process plays out. But in the short term, this is great news for the Standing Rock Sioux.