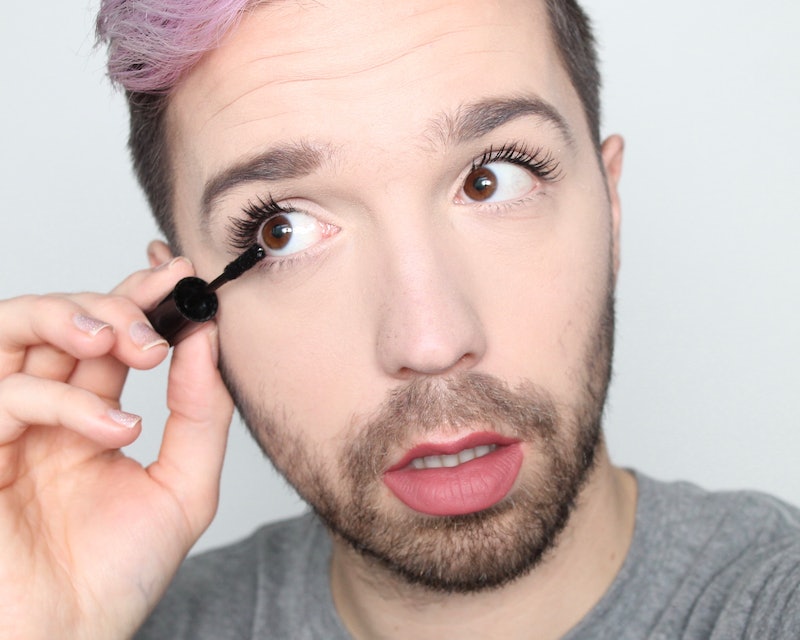 Finding the perfect mascara is a lifelong task. Do you want lengthening or volumizing? Drugstore or high end? Waterproof or washable? There are endless possibilities, but what about mascara hacks to improve the products you're already wearing?

I’m not going to tell you that I’ve tried every mascara out there, but I will tell you that I’m close. There are a few heaters I reach for whenever I want to ~lacquer my lashes~ *ahem* but there are a few secret weapons I use to amp up my lashes that nobody talks about. The best part? You can use them with the mascara you’re already using.

Every time I'm wearing just a little makeup, I always think to myself, "It's a no mascara day!" But then I look at my lashes, which have undoubtedly been covered in foundation, and think twice. A little mascara never hurt anyone, and a lot of mascara always looks awesome, IMO. Big lashes are amazing but mascara alone isn’t the only way to achieve them. I’ve got a few ways to achieve gravity-defying lashes without falsies (we’ll talk about falsies later) and today, I am going to share them.

Join me on my journey, won't you?

I’ve told you time and time again to prime everything, so it should come as no surprise that this extends to your lashes.

Whether you’re looking to add length or volume, primers are a great way to help you get there. Primers create a base that beefs up your lashes and gives the illusion that they are bigger even before you even apply mascara. Instead of using four coats of mascara to get the huge lashes we want, and then dealing with it flaking off or smudging on our lower lids, a primer is a great way to give your lashes a better base, so you'll end up using one or two coats of mascara. They are available at a number of different price points, and L’Oreal just released a drugstore primer that is a great option if you’re looking to try primers without emptying your checking account.

My favorite primer at the moment is the Smashbox Photo Finish Lash Primer.

One of the reasons it pulls ahead of the rest is that it's translucent, where most primers are white. Instead of covering your lashes in white, then having to cover all of that up with your black mascara which sometimes leads you pile up more product than you want, it lengthens lashes without leaving any trace of product behind.

White primers are awesome because they show you everything you need to cover up, but sometimes that backfires and you're trying to work your mascara wand into your lash line to cover up that last bit of white.

The Smashbox joint gives your lashes length and volume that you can top with your favorite mascara, improving its overall effect, using just enough mascara to get you there. I also feel like it's more lightweight and flexible than others I've tried, but that's just me.

Primers are a great way to take the mascara you already love and juice it up a little. Here I am primed and dangerous.

There's this ugly rumor going around where people are saying that I can't take a picture with my mouth closed...

AND THEY'RE RIGHT. Anyway focus on my bomb lashes, that's why we're here.

Omg I can't believe I'm letting you guys in on this. Lash fibers are what I use when I want my lashes to go off.

They're these plant-based fibers that you brush onto your mascara to add dramatic length and volume. This is that red carpet shit. This consistently gives me big, fanned out, high glam lashes that are almost too good to be true.

Okay so here's how I do it.

Normally, I only wear waterproof mascara, because there's nothing worse than being thrown under the bus by your own mascara leaving black rings under your eyes. In this case, I start with a regular, washable mascara. Here, it was Maybelline's The Falsies Push Up Drama, because I love drama.

The reason being is because this is a multi-step process. The fibers need something to cling to, and waterproof mascaras tend to try down faster than washable, so the fibers wouldn't stick to a waterproof product. I do one coat of mascara, and then hit my lashes with the fibers immediately, doing one eye at a time. One or two passes is enough. Apply just like you would mascara, press it into the lash line, wiggling the wand and the root, and pulling through.

HELLO. Us millennials are apparently all about instant gratification and if that is not IT.

Then, after you've applied to both eyes, top with another coat of mascara. It doesn't have to be the same one as you started with, go wild! You can even seal them in with a waterproof option, which is what I always do.

Word to the wise: There will be fallout. Not a lot, but excess fibers are going to drop onto your face. The good news is that the fiber loss that happens initially is 99% of what will happen throughout wear, so you're not going to be on Fiber Patrol all night, hoping that little black specks aren't all over your face. Just make sure you brush them off before you leave the house.

And for the love of god, brush them off before you set your makeup. You don't want to spritz on a setting spray and seal them to your face...

What else? Oh yea.

It's just always good to have one of these in your arsenal. Not all mascaras are available in a waterproof formula, which is a damn shame. I hate finding a mascara that has a formula and brush that makes my lashes look gorgeous, only to find out that there's not a waterproof option. This isn't always a deal breaker, because when you find a product that's that good, you're going to wear it, you know? Plus, waterproof doesn't always mean you're going to be free of smudges at the end of the night, sadly.

Cut the shit and just get a waterproof top coat. You'll no longer have to pick between a washable option that you love and a waterproof mascara that's just passable.

The one I always use, that I think has just been discontinued, is the Locked & Coated Lash Topcoat from bareMinerals, but don't worry, there are a lot of other choices.

I loved Locked & Coated. It's super-thin wand sported ultra-fine bristles to apply a waterproof shield to whatever mascara you were already wearing. Genius, right? I know.

Don't fret. Brands like Clarins, NYX and Ulta have got you covered.

Finally, and I can't believe I'm saying this...

What's a spoolie? It's basically a disposable mascara brush. Why the hell are they called spoolies? I don't have an answer for that.

I would always roll my eyes at people when they talked about applying mascara and then running a clean spoolie through their lashes to make them look even better. Just get a better mascara! I'd think to myself. But I have seen the error of my ways.

No matter how much you love the mascara you're using, sometimes you just need a little extra help! You know when you see those two lashes clinging together and you just can't get them to separate with the mascara brush? It's infuriating, I know. You can't keep going in with the same mascara brush because you'll apply more product which won't help, and you certainly can't use your fingers to separate because we all know what a disaster that turns into.

Things I have used to separate my lashes:

Dude, don't do this. Just use a spoolie! And they're not just for problem areas. Quickly combing a dry spoolie through your lashes will apply the mascara more evenly and remove any product that you just don't need in there. They're never a bad idea. You can get a set of 200 on Amazon for $12 lol OR this bomb set from Sephora that I've been dying for but keep forgetting to buy.

Let's take a look at my eyelashes again, shall we? They're just too good.

See? All of tips & tricks have helped me take my lashes from good to, well, downright f**king amazing. A great mascara is essential, but any of these can help take it above and beyond.