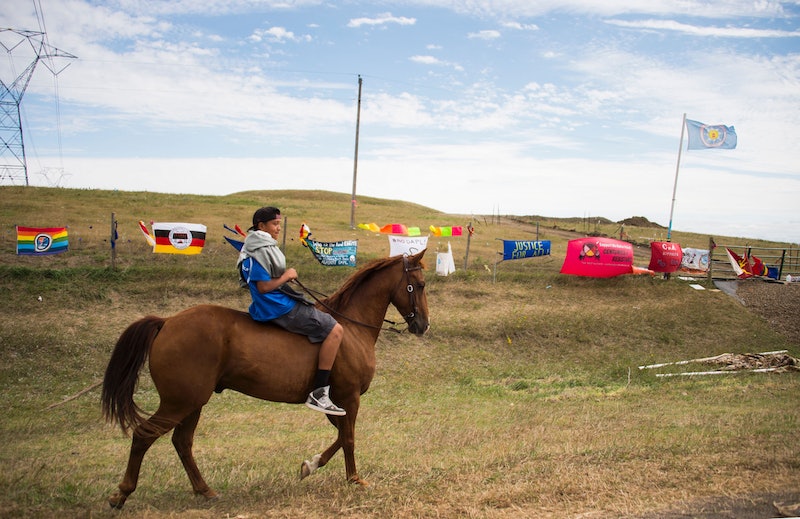 With the seeming victory on the part of Dakota Access pipeline protesters at the Standing Rock Sioux reservation in North Dakota, the future of the water protectors might be up in the air. Now that the Army Corps of Engineers has officially denied the pipeline's permit, it's prudent to ask: will Standing Rock protests end? In short: Although this battle has been won, the war is far from over.

News of the federal denial of the Dakota Access permit comes less than two weeks after the Army Corps issued an eviction notice to protesters at the Oceti Sakowin camp, the largest encampment of protesters at Standing Rock. The eviction is effective on Dec. 5, meaning that protesters will have to be out of the camp within a day of news that the pipeline is to be re-routed.

That said, Energy Transfer Partners and Sunoco Logistics Partners, the two corporate entities responsible for the DAPL, issued a statement following Sunday's news, claiming they are "fully committed to ensuring that this vital project is brought to completion and fully expect to complete construction of the pipeline without any additional rerouting in and around Lake Oahe." Insisting that the company had followed the rules throughout the entire process, the press release also criticizes the Obama administration for making what it alleges was a "political decision." In other words, the DAPL decision has its opponents.

Despite the fact that the pipeline is only forestalled until the end of Obama's presidency, many protesters and anti-pipeline advocates are falsely viewing this as the death of "the black snake" that is the Dakota Access Pipeline. While the loss of the many tourists-turned-protesters at Standing Rock will be no major blow to the movement, there is likely to be a major dip in both interest and donations from many who became fair-weather activists in this cause célèbre.

Although #NoDAPL activists can and should celebrate the federal block of the pipeline, all those who championed the cause should not rest on their laurels following this announcement. Given the serious and somewhat extreme political pressure to push the pipeline forward as intended, as well as the incoming administration's support of the original plans, the possibility of the DAPL being built near Standing Rock Sioux lands is not all that distant. The fight for indigenous sovereignty and clean water is much larger than this singular moment, and will not end anytime soon.