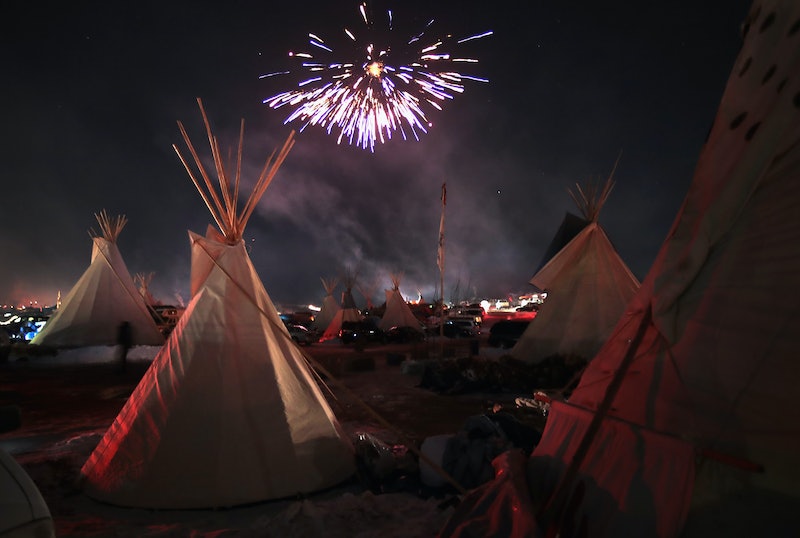 On Sunday, the U.S. Army Corps of Engineers declined to grant an easement for the Dakota Access Pipeline to cross under a Missouri River reservoir in North Dakota, marking an important victory for the water protectors at Standing Rock. A statement released by Standing Rock Sioux Tribal Chairman Dave Archambault indicated that the Army Corps would undertake an environmental impact statement to find alternative routes for the pipeline.

However, as BBC reported, the pipeline is already close to completion, and Energy Transfer Partners — the corporation behind the pipeline — released its own statement asserting that it is "committed to ensuring that this vital project is brought to completion and fully expect to complete construction of the pipeline without any additional rerouting in and around Lake Oahe." ETP also argued in its statement that "nothing this Administration has done today changes that in any way," making it clear that the fight against the Dakota Access Pipeline is not over yet.

The Obama administration's decision to order an environmental impact statement is certainly a success on the water protectors' part, but it is not a moment to congratulate the administration. An environmental impact statement ought to have been undertaken to begin with, and as many water protectors have pointed out, it might take months, leaving a future President Trump's administration to make a final decision. President-elect Trump has already announced that he supports the pipeline, though he has argued that his support does not stem from his personal investments.

Given the uncertainty and precariousness of the situation, water protectors have made it clear that they will stay camped out in North Dakota, and they still need our full support. Here are some steps you can take to ensure that the fight to protect water does not end with the Army Corps' announcement.

1. Amplify the voices and work of the water protectors.

The decision to not grant an easement is entirely thanks to water protectors who have camped out for months to fight the pipeline and protect their land and water. They have done this even as local law enforcement has taken aggressive action against them, going so far as to use water cannons in below freezing temperatures. Rather than congratulating the Army Corps or the Obama administration, this is a moment to highlight the incredible and powerful work the water protectors have been doing, and will continue to do.

Follow the Oceti Sakowin Camp and Sacred Stone Camp to get reliable updates. Support the Standing Rock Medic & Healer Council, which has provided critical medical aid and resources to all those fighting the Dakota Access Pipeline. Share the work of Native writers like Kelly Hayes, who have been instrumental in raising awareness about what has been happening at Standing Rock.

In this fight, it is of the utmost importance that other people's lives and narratives are not centered at the expense of Native American and indigenous people who have long been displaced and ignored. But this is not true just of the #NoDAPL movement. We must unconditionally support Native American and indigenous folks, not just when there is a major action taking place.

As Hayes recently pointed on Twitter, much of the support for the Dakota Access Pipeline comes from big banks and other financial institutions. Given that the fight is not over yet, it remains crucial that we put pressure on these institutions — by protesting, closing bank accounts, writing letters, boycotting — so that they are forced to divest their resources from the pipeline. It is clear from the tweet above that these measures have already had an impact. After one of its Minneapolis buildings was occupied by environmental and indigenous rights activists standing in solidarity with Standing Rock, Wells Fargo sent a letter asking to meet with Standing Rock Sioux tribal leaders. The bank, which lent almost $4 billion to the pipeline project, has now seen firsthand the power of collective resistance, and it is clear that it is effective.

3. Remember that DAPL is not the only pipeline out there.

Even as we focus on the Dakota Access Pipeline — just as we focused on Keystone XL — there have been other pipelines being proposed and built, and other pipeline leaks. According to the Natural Resources Defense Council, these pipelines have led to a rise in pipeline spills and oil train derailments in recent years. Just last January in North Dakota, for example, a pipeline ruptured and leaked 3 million gallons of brine. The company behind that pipeline then proposed a 3.2-mile pipeline to connect to Dakota Access, despite being responsible for such a huge oil spoil. An investigation by The New York Times found in 2014 that North Dakota had become an oil powerhouse, but that simultaneously, "the number of reported spills, leaks, fires and blowouts has soared, with an increase in spillage that outpaces the increase in oil production."

North Dakota is not the only place to have experienced pipeline leaks, of course. Just a couple weeks after the North Dakota spill, a pipeline in Montana burst for the second time in five years, spewing roughly 50,000 gallons of crude oil into the Yellowstone River. There are other examples, too, and the NRDC has compiled in a comprehensive report of the spills that took place just in 2015. Oil pipelines are a huge contributor to climate change, and they pose enormous risks to water supplies and the environment. The work the water protectors have done to fight the Dakota Access Pipeline should remind us all of our responsibility to fight other pipelines as well, and to put pressure on global leaders to combat climate change.

As ETP reaffirms its commitment to carry the Dakota Access Pipeline to completion, we all must reaffirm our own commitments to support the water protectors in North Dakota, as well as Native American and indigenous people across the country, as they defend their land and fight to protect their water.