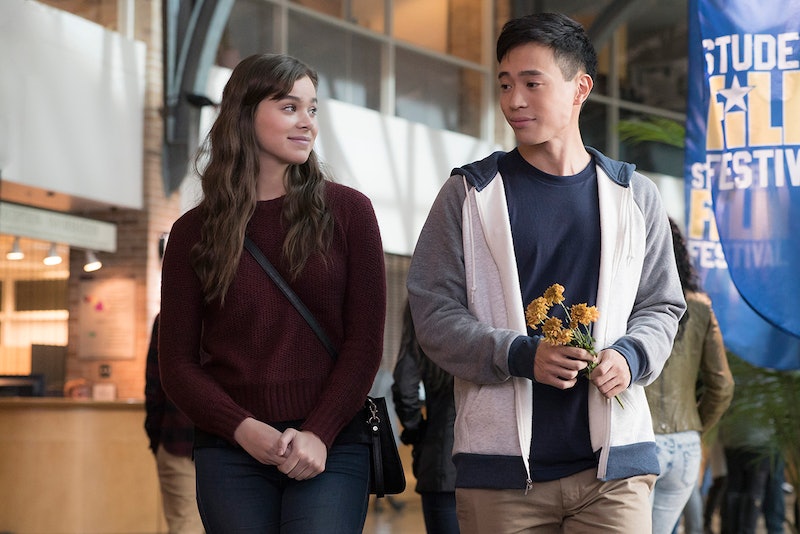 Most feminist films released in 2016 were independent ones with limited releases and very small budgets. They were popular on the festival circuit, but not widely released, or they were studio releases that failed to reach expectations at the box office and disappeared from theaters the moment they arrived. All in all, it hasn't been the best year for feminist films getting seen by massive audiences, but that doesn't mean that there aren't some truly great, female-led films released in 2016 — like The Edge of Seventeen. Even if you haven't heard much about it yet, don't let The Edge of Seventeen be the one feminist movie you didn't see in 2016. There's still a chance you can see it, and I'm here to tell you why you should.

The Edge of Seventeen was released on Nov. 18, the same day as Fantastic Beasts and Where to Find Them, and, while it has had a somewhat decent reception at the box office, it wasn't exactly a huge hit. Having only been released in 1,945 theaters domestically (in comparison, Fantastic Beasts opened in 4,144 theaters), The Edge of Seventeen is a movie destined to get lost in the sea of blockbusters. But, as a rare feminist gem of a film, it deserves so much more than that.

The film starts out with a pretty typical teen movie plot device: Nadine, our 17-year-old protagonist, is thrown for a loop when her best friend, Krista, starts dating her seemingly perfect older brother, Darian. But despite this somewhat cliched plot, Nadine's emotional journey throughout the film is anything but. She doesn't spend the entire movie getting a makeover to become popular or to attract a man, and she isn't humiliated in front of the entire school at prom or caught in a war between the cool kids and everyone else. In fact, for the most part, Nadine's story isn't manipulated by high school tropes. Instead, her story is, well, pretty normal.

Part of what makes The Edge of Seventeen so unique, and so feminist, is that Nadine's conflicts are all of her own making. She has all the agency she could want, but she just uses it in questionable ways. This might sound like a small victory, but it's actually pretty huge. Teenage movies rarely respect their protagonists enough to let them fumble in such a realistic way. Movies that are hailed as authentic to the teenage experience tend to exist in a heightened reality, like Juno or Superbad. The Edge of Seventeen, though, takes place squarely in reality. It might not be as crazy or shocking, but it is real. And there's nothing more feminist than allowing female characters the freedom to be actual people.

Off-screen, The Edge of Seventeen is even more remarkable. Unlike many other feminist, indie films of 2016, like Hello, My Name is Doris or The Bronze, The Edge of Seventeen was directed by a woman. Kelly Fremon Craig has the sole writing and directing credit on the film, a rarity for any movie in the Hollywood sphere. In 2015, the Center for the Study of Women in Television and Film at San Diego State University found, via Variety, that of the 700 top grossing films released in 2014, only 13 percent had female directors. Hell, even the all-female Ghostbusters reboot was directed by a man.

The fact that The Edge of Seventeen was made by a female writer-director doesn't make the film feminist on its own, of course; men can, and have, made feminist films in Hollywood (see: Paul Feig's Ghostbusters), and that's always a good thing. However, any time a female director gets to sit behind the camera, it's a win for women in Hollywood. And moviegoers should do everything in their power to support female-directed films, to encourage Hollywood to hire more women behind-the-scenes.

In ways both on-screen and off, The Edge of Seventeen is a gem of a film that paints a painfully authentic portrait of what it is to grow up as a young woman that feminist everywhere will recognize. And for that, it is not to be missed.

More like this
Sandra Bullock, Girlboss Extraordinaire
By Matt Harkins & Viviana Olen
Lisa Marie Presley Reviewed Baz Luhrmann’s ‘Elvis’ Movie On Twitter
By Grace Wehniainen
'Doctor Strange 2' Star Benedict Cumberbatch’s Net Worth Is Not An Illusion
By Hugh McIntyre
The 'Hocus Pocus' Sequel Finally Has A Release Date & It Makes Total Sense
By Shannon Barbour and Radhika Menon
Get Even More From Bustle — Sign Up For The Newsletter