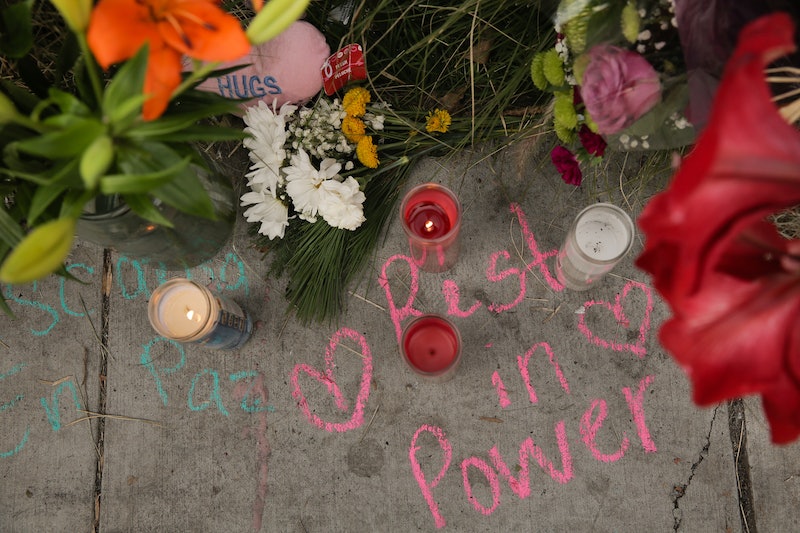 On Friday night, a huge fire swept through the Oakland Ghost Ship warehouse during an electronic dance concert. The fire spread quickly through the two-story warehouse, trapping dozens of people. ABC 7 has reported that at least 36 people are dead, with the death toll expected to climb. The Oakland Fire Department has reported that this warehouse fire has had a higher death toll than any other fire in the city's history. For many marginalized artists, spaces like Ghost Ship were communal spaces where they could be themselves. In light of these tragic events, we should honor and remember those who died in the Oakland fire as they rest in power.

The City of Oakland recently published the names of seven of the victims, adding that it knew the identity of an eighth but would not publish their name because that person is 17 and a minor. In total, authorities have reportedly identified 11 victims. There are still many others who have been reported missing by friends and family. Who are the victims of the Oakland fire, and what are their stories? They were artists, students, teachers, musicians, friends, siblings, deeply loved by those who they've left behind. Let's take some time to learn their stories, and honor them.

Cash Askew was an Oakland-based artist, of the band Them Are Us Too. According to musician Madigan Shive, who knew her for over a decade, Askew had recently come out as gender nonconforming and transgender. Dais Records, Askew's record label, released a statement honoring the artist's “gentle kindness, and her creative momentum." The statement also said that Askew "was loved and admired by everyone she met, and her passing is an excruciating loss that we may never fully process or recover from," according to the Los Angeles Times.

Reports from the Los Angeles Times appear to contradict the City of Oakland statement. The City of Oakland released the name of 35-year-old David Clines of Oakland as one of the fire victims, while the LA Times and NBC both identify a 24-year-old David Cline. CNN reported that 35-year-old Cline lived in Oakland but was originally from Santa Monica. His brother wrote the following on Facebook to honor him: "We just received word that my brother David Cline passed away in the Oakland Fire. To all of you, thank you. Thank you for your kindness, help and love. To David, we love you. You will be with us always."

Cline's former clarinet teacher, Amanda Walker, remembered Cline as a smart and humorous student who shared his goals with her. Walker told the LA Times that Cline played volleyball at a championship level, and that her "heart hurts" in the aftermath of his death.

"It’s a huge loss and it’s always so tragic,” Walker said. “This is not the right way around. I don’t expect to be going to a memorial service for one of my former students.”

Sara Hoda was from Walnut Creek, California, and was a teacher at a Montessori school. She and her friend Carol Crewdson started a collective back in 2010 for traveling artists to rest when they could not afford the rising rent prices in Northern California, housing up to 32 people at a time.

“Sara was always really active in that process,” Crewdson told the LA Times. “She was always an active participant. She was unique.”

Donna Kellogg, an Oakland resident, was remembered by Facebook friends as a “beautiful giggly, wise, person who will be very missed.” Kellogg was reportedly on the second floor of the Ghost Ship warehouse when the fire broke out. The "Golden Donna 100% Silk 2016 West Coast Tour” event page, where Ginger Kellogg Jimenez wrote about her sister Donna's death, ultimately became a memorial page for the Oakland fire.

“This is my sister, and we were notified this morning that her body was found. Prayers for the family will be greatly appreciated,” Kellogg Jimenez wrote on Sunday.

According to CNN, Brandon Chase Wittenauer went by the name "Chase" to his friends. He was a prolific musician whose stage name was "Nex Luguolo." Wittanauer was a Hayward, California resident who was the lead vocalist of Symbiotix.Fungi, a musical duo. CNN also reported that Wittenauer lived in Nicaragua for a time when he was a child. His father reportedly posted a photo of his car — which was still parked outside the warehouse after the fire — following the news of his death, with the caption "Please don't let it be true."

Brendan Dreaper was Travis Hough's manager. Dreaper told the LA Times that Hough was an Oakland resident and a creative arts therapist at a Bay Area school. Hough was a California College of the Arts alumnus, and was a member of the band Ghosts of Lightning.

“He was a super fun person to be around. I never had a bad day being around him,” Dreaper told the LA Times about Hough. “Travis had his heart open to everything and I’m at a loss for what to say.”

Hough and Dreaper — both former glass artists — became friends and produced a podcast together about people's creative processes.

The Los Angeles Times reported that Nick Gomez-Hall was a graduate of Coronado High School. Gomez-Hall reportedly worked at Berkeley-based publisher Counterpoint Press, and his Facebook friends described him as a "creative soul" and "brilliant artist" after his death was confirmed by authorities. He was also reportedly in solidarity with indigenous resistance against the Dakota Access Pipeline at Standing Rock. His company, Counterpoint Press, released a statement on Facebook following his death:

Counterpoint is devastated over the loss of our co-worker and dear friend Nick Gomez-Hall due to the Oakland Ghost Ship fire. From the second Nick started at Counterpoint, he became part of our family. Whether he was recommending new music to listen to (and it was always so good), regaling us with tales of the bowling alley, offering his beloved truck for a ride if anyone needed it, or sharing his much appreciated opinions about a book jacket or manuscript, he made everyone feel like they were his friend. He was kind, considerate, hilarious... In short, he was an essential part of our team.

We send all of our love to Nick's family and friends and hold our treasured memories of him deep in our hearts. Counterpoint mourns the loss of an extraordinary co-worker and a true friend.

All of the victims of the Ghost Ship fire may have different stories, but they will all be dearly missed by their communities.