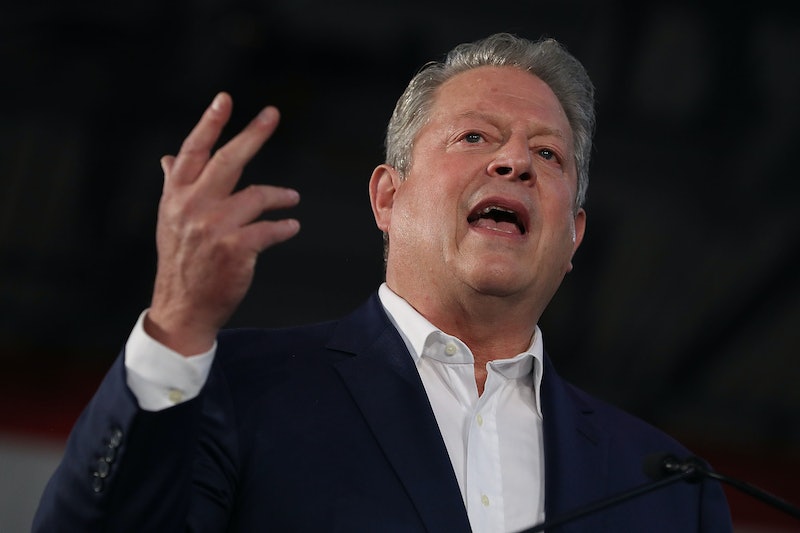 Al Gore knows a little something about moving on after a loss. He may not have won the presidential election in 2000, but now the Oscar and Nobel Prize winner has a piece of advice for Democrats ailing after their resounding loss in the election. Gore says that climate change activists have no time to lose with Donald Trump about to step into the White House, he says, so it's time to start the fight now. Gore largely left politics after conceding the presidency to George W. Bush, instead dedicating himself to the fight against global warming. Now he hopes that after suffering a fate similar to his at the hands of the Electoral College, Hillary Clinton will join him in the effort. Having outgoing president Barack Obama's voice in the mix, he believes, also wouldn't hurt.

Trump's statements on climate change don't exactly reveal a deep scientific understanding of the subject. Besides his recent statement claiming that he has an "open mind" on the issue, he's spent the last several years saying that it's a hoax and publicly questioning the U.S.' commitment to things like the Paris agreement and clean energy. His aforementioned softening on the subject also doesn't seem entirely genuine, given the number of climate change deniers with places in the Trump administration so far. Suffice it to say, Gore — along with the rest of the planet — has reason to be concerned.

Gore knows better than anyone else, though, that the changing climate does not leave any time to sit around and mourn the loss of a chance to design policy combating climate change. He reached out to Trump offering to work with him on environmental policy, unlikely though it seems that Trump would take him up on it. Perhaps more importantly, he's optimistic that after considering some of the more extreme ideas that Trump has put forward, more people will take matters into their own hands and become climate change activists themselves.

In the meantime, Gore won't stop his own fight, and he wants as many people as possible to join him. He started the Climate Reality Project, an advocacy group aiming to inform people and motivate them to take action. Dec 5-6 is their annual 24 Hours Of Reality, which is 24 hours of streaming video calling for change and giving different ways to get involved.

Unfortunately, climate change won't become less real just because the scientifically uninformed say that it's a hoax. It's a huge threat to the global economy, a huge issue for global security, and a problem that humanity needs to address before it gets much worse for future generations. Clinton and Obama have shown that they understand that — so hopefully they and millions of others will heed Gore's call to jump in and fight against it.