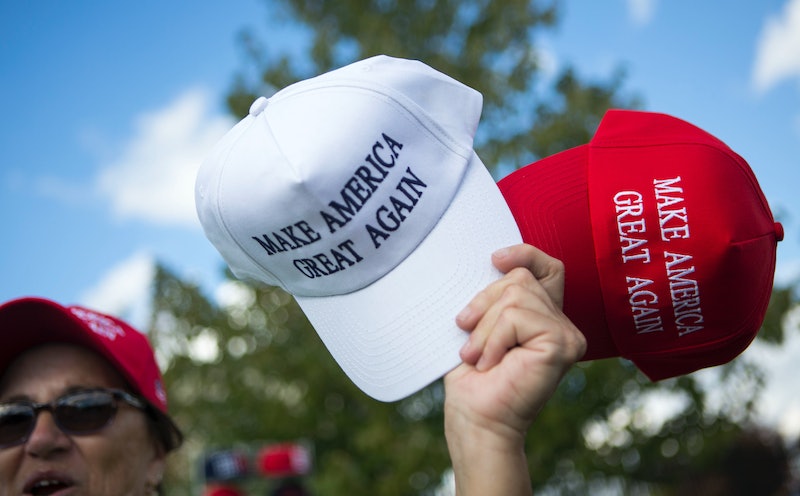 Hey, America! Donald Trump finally released that thing we've all been waiting for! No, he still hasn't revealed his tax returns. Sorry, it's not his super-secret-not-at-all-fake-I-promise-it's-real "plan to defeat ISIS" either. It's not a substantive apology (or acknowledgement) for making baseless claims about "million of people who voted illegally" because he was pissed off that he lost the popular vote (which he did, by 2.5 million votes as of this writing, according to the Cook Political Report).

Instead, in such times of turmoil, the president-elect used his newfound resources to bring Americans together in a way only he knows how: by selling a new round of ugly hats on his revived corpse of a campaign website.

If there's one thing our beloved president-elect enjoys more than insulting women and "grab[bing] p*ssy" (his words, not ours), it's wearing stupid hats and charging Americans through the nose to buy them. The latest line of hats don't even bother to promise that he's going to make America anything again — they just say "USA" and "Trump," as if the person who designed them picked their favorite nouns from a word cloud of Trump's twitter feed.

The hats come in three colors: one as white as Trump's vision for America; one in a shade even redder than Trump's debate face; and one in a weird camo print with orange text that looks like how Trump thinks the Army dresses. Esquire wrote that Trump's appearance in his new hat "makes him look less like the country's president than its shift manager"; if you're going for that look and like funding a real estate mogul who has insulted Gold Star families and Sen. John McCain for specifically being a prisoner of war and has unapologetically mocked people with disabilities, then this item just might be for you.

His press email for the new hat states "Our movement's new cap shows our call for unity, country, and patriotism during this critical time in our nation's history," suggesting his team believes his significant popular vote deficit and fears surrounding his impending presidency can be silenced by unbecoming headwear.

There was a point when Americans held out hope that the razor-thin silver lining of a Trump presidency would be a pause in his shilling such ridiculous, self-promoting garbage. But, alas, in addition to the $149 Christmas ornament, these latest hats show that Trump has about as many useless, vile things to sell as he does to say.

More like this
10 Times Diana & Meghan Spoke Similarly On The Royal Family
By Sophie McEvoy
How The City Healed Five Years On From The Manchester Arena Attack
By Ella Glover
Michigan’s Governor Is “Going To Fight Like Hell” To Protect Abortion Access
By Andrea Zelinski
Where Is Dr. Cline Now?
By Morgan Leigh Davies
Get Even More From Bustle — Sign Up For The Newsletter