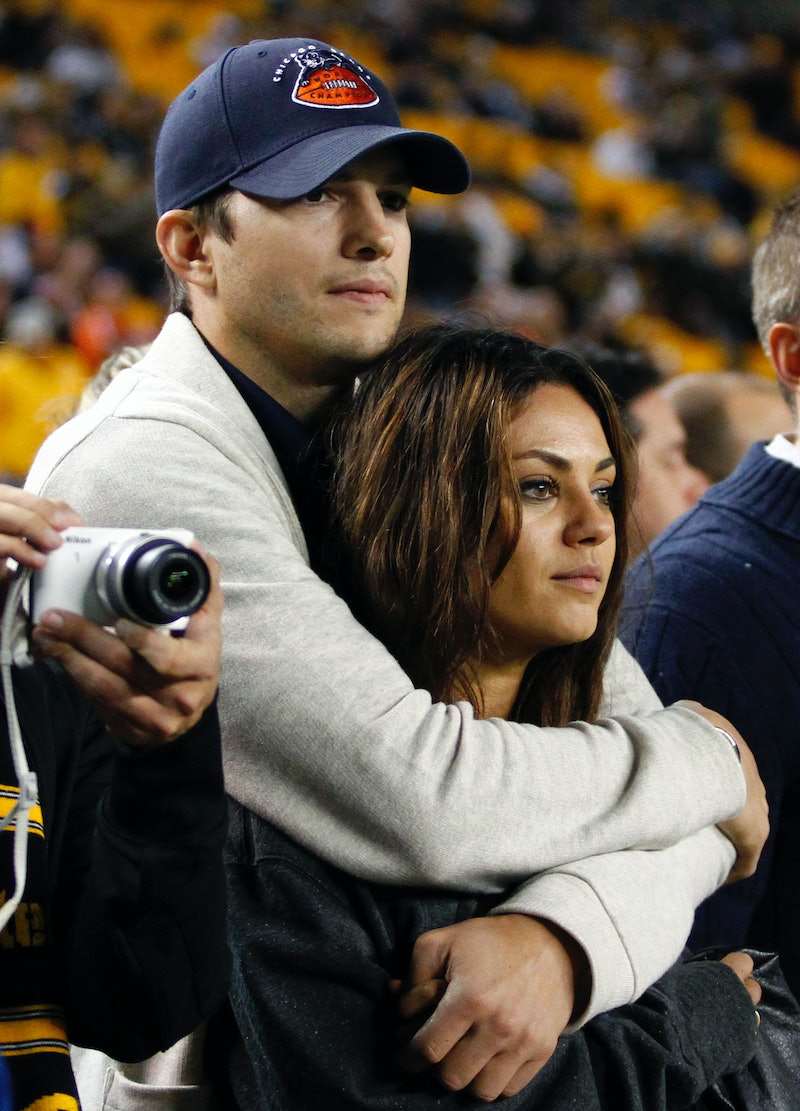 Adorable couple Mila Kunis and Ashton Kutcher are already parents to 2-year-old daughter, Wyatt Isabelle, and on Nov. 30, 2016, they announced the birth of their second child, a son. On Dec. 2, via Kutcher's website, A Plus, the couple revealed their son's name as Dimitri Portwood. In their statement, they didn't give further information about the origin of the name, but to satisfy my own curiosity: What does the name Dimitri Portwood mean?

Kutcher shared on Conan in 2014 how he and Kunis chose Wyatt Isabelle's name, which gives clues as to the meaning of the name Dimitri Portwood. He told host Conan O'Brien that Wyatt was a name Kutcher randomly yelled out while driving with Kunis, so it was essentially chosen by him. He said of their daughter's middle name, "We gave her the middle name Isabelle after Mila's grandfather, who was Yitzhak, so it has a little heritage [too]."

This time around, the couple looked back at their heritage even further and decided on Dimitri Portwood, mixing both of their families.

Dimitri is a very popular Russian name and Kunis, who moved to the U.S. from Ukraine at seven years old, is fluent in Russian herself. As for the meaning, according to Namebery, "Dimitri is one of several possible spellings of this exotic, artistic, and attractive Slavic variation of the name of [Demetrius], the Greek god of fertility and farming."

Since Kutcher confessed to be the one to directly find the name for Wyatt, it seems that Kunis had her say in choosing their son's name as a nod to her roots. Kunis once told Marie Claire that she still speaks Russian to her grandparents and said, "My kids are going to know Russian. They’ll probably go to, like, a Russian pre-school. So, it makes sense that she might make the connection with her child's name, too.

It appears that Kutcher had his say in Dimitri's middle name, but it doesn't have as strong of a etymological meaning as Dimitri — instead, it's all about family. As People notes that Portwood is his step-father, Mark Portwood's, last name. His mother, Diane Portwood, also shares the name so the combination of Dimitri and Portwood honors the similar reasons they named their daughter Wyatt Isabelle — a connection to heritage and family.

While the couple has shared their children's names, they are committed to keeping their kids' childhoods private and they shared in a phone call to A Plus, "We'd like to allow our kids to make their own choices on whether to have a life in the public eye or not... We don't want to make the choice for them." Sounds like Wyatt and Dimitri are in good hands!