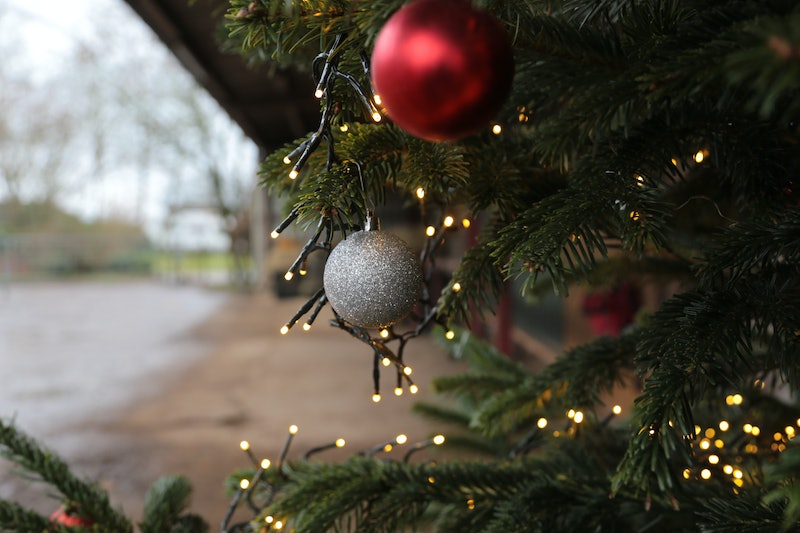 There's something about Christmas lights that immediately make you feel cozy and safe. But although it seems distinctly contemporary, the tradition of hanging twinkling lights outside during the holidays is hardly new. So where do Christmas lights come from? Well, I think the word you're looking for is Danke.

The precursors to Christmas lights — lit candles — began being used for holiday decoration in 17th century Germany. Germans developed a tradition of attaching lit candles to the branches of trees (which definitely sounds like a fire hazard, by the way) with melted wax and pins. They also placed burning candles in their windows to designate their homes as Christian and as places of worship. This wasn't solely for decoration, though; winter brings about a whole lot of darkness, and in the time before electricity, it was very cold and very dark indeed. As far back as the 1100s, Europeans began establishing traditions that incorporated warmth and light into their routines.

By the 18th century, upper-class Germans had begun featuring a specific Christmas tree in their homes; from there, the traditions of both the candles and the tree then spread to Eastern Europe.

Because having a bunch of lit candles wired to a tree was a bit, uh, precarious, candleholders became increasingly popular, followed later by lanterns and glass balls. In 1832, the 13-year-old future Queen of England, Victoria, first witnessed the concept of a "Christmas tree" — an evergreen lit with candles, decorated with ornaments, and surrounded by wrapped presents. It was during Victoria's reign that Christmas lights became a United Kingdom tradition; after an engraving of the Royal Family celebrating Christmas at Windsor Castle was published in 1848, German traditions became officially A Thing, according to the BBC. Thanks, Vicky!

In the 1880s, the first variations on electric string lights hit the market. Edward H. Johnson, Vice President of the Edison Electric Light Company and pal of Thomas Edison, had electric lights made specifically for his Christmas tree; on Dec. 22, 1882, Johnson displayed his tree, strung with 80 lights the size of walnuts, in his home on Fifth Avenue in New York City. It was dismissed as a publicity stunt — understandably, considering Edison had become notorious for creating elaborate displays of electricity's power — but people were clearly paying attention. In the early 1900s, there were several recorded instances throughout the United States of trees strung with lights; after a few decades, the trend began to snowball.

Because electric lights were relatively expensive (in the early 1900s, they were sold for $12 a string — which is equivalent to almost $500 today, according to this handy dandy inflation calculator), it wasn't until the 1950s that the average American household was able to get their mittens on some Christmas lights and start stringing them not only on the tree, but also on the windows, the doors, the roof... pretty much anywhere you can imagine. Since then, this distinctly American trend has spread across the world. From Hong Kong to Copenhagen and Brussels to Kobe, Japan, Christmas light displays have become a global phenomenon.

And yet in all that time, no one has developed the technology to make them not incredibly irritating to untangle, huh? Ah, well. You win some, you lose some.

More like this
81 Epic Truth Or Drink Questions To Play 'Say It Or Shot It' With
By Bustle UK
Jennifer Lopez Found The Perfect Ben Affleck Throwback Video For Mother’s Day
By Stephanie Topacio Long
If Your Refrigerator Is A Mess, These 25 Organizing Products Can Help
By Courtney Young
Here’s What Sarah Jessica Parker’s Canned Cosmo *Actually* Tastes Like
By Emma Garza
Get Even More From Bustle — Sign Up For The Newsletter