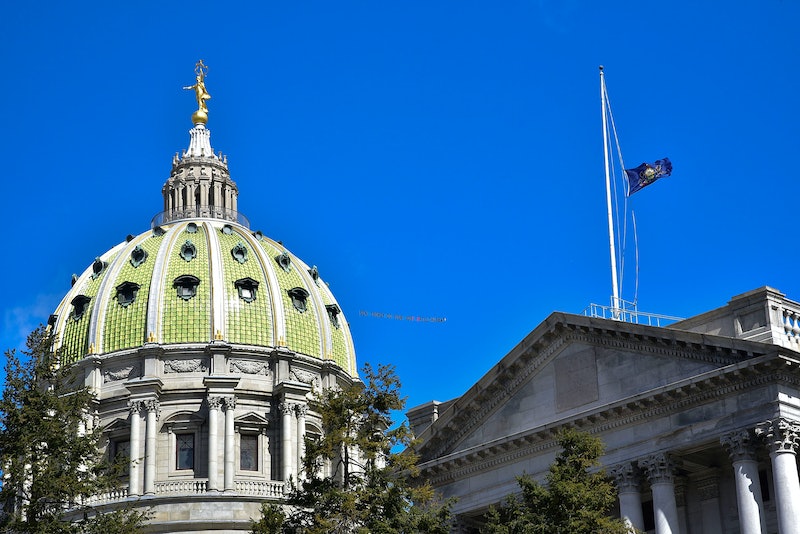 Almost immediately after Donald Trump's presidential election win, people scrambled for any hope of a way out of the stunning reality. While there's been so many stories written to argue over if the Electoral College could or should not cast their vote for Trump when the electors meet, the day we'll learn the final outcome draws near. If you're a Pennsylvania voter (or someone interested in the Keystone State's role in history as a swing state), you may be wondering where Pennsylvania electors will meet on Dec. 19 to cast their presidential votes?

According to the Department of State's website, the Electoral College electors will meet in the state's capitol of Harrisburg to make their final decision. The vote will take place at noon on Dec. 19 in the Chamber of the House of Representatives in the Pennsylvania State Capitol. The Electoral College mirrors the state's electors in government; each state has at least three (two senators and at least one representative). Since Pennsylvania has two senators and 18 representatives, 20 electors from the following counties were chosen to represent the state in the final vote: Bradford, Bucks, Cambria, Centre, Chester, Cumberland, Delaware, Indiana, Lycoming, Montgomery, Northampton, Philadelphia, and Warren.

When voters cast their ballot in a presidential election, they aren't voting for a presidential candidate directly, but rather for the party's electors in that state. These electors come together on the first Monday after the second Wednesday of December to elect the president. Although the electors are technically pledged and expected to vote for the candidate of their party, they can vote against the party and state's wishes, becoming a "faithless elector." According to The New York Times, this does happen occasionally, but has never actually changed the result of an election.

Besides non-Trump voters' faint hopes that their electors will go rogue, there is also the matter of Green Party presidential candidate Jill Stein's attempts to initiate recounts in several states; Pennsylvania is among them. As of Dec. 5, Stein had asked the U.S. Court to order a recount in Pennsylvania, where Trump's lead had shrunk to 49,000. Although the state was still counting votes, officials said that there was no way there were enough uncounted votes to overturn the results in Pennsylvania.

We'll just have to wait to find out what exactly will happen on Dec. 19 when the electors gather, but it's a pretty safe bet that we're in for four years of president-elect Trump's America.

More like this
Michigan’s Governor Is “Going To Fight Like Hell” To Protect Abortion Access
By Andrea Zelinski
How To Fight For Reproductive Rights, Based On How Much Time You Have
By Courtney Young
LGBT+ Men Fleeing Afghanistan Were Denied Asylum By The Home Office, New Findings Show
By Sam Ramsden
50 Years After Creating Her Alter Ego, Angelyne Is Still Driving That Pink Convertible
By Gretchen Smail
Get Even More From Bustle — Sign Up For The Newsletter