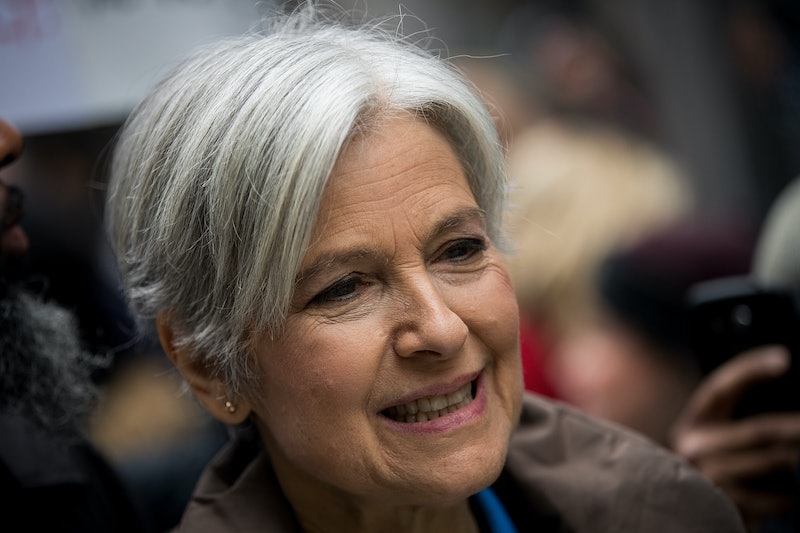 Stein and her allies are pushing for recounts in Wisconsin, Pennsylvania and Michigan; in the unlikely event that the results of the presidential vote were overturned in all three states, Hillary Clinton would be the winner of the electoral college and the presidency.

Although the recounts in Wisconsin and Michigan are already underway, the Pennsylvania initiative is currently stalled in the courts. Stein had filed a lawsuit in Pennsylvania state court demanding a recount, but she withdrew it on Saturday after the court demanded a $1,000,000 bond in order for the recount to proceed.

Instead, Stein is now pushing for a recount in federal court. That's the lawsuit she filed on Monday.

"We're here today to stand up for a vote that is accurate, secure, fair and just, in which every vote counts," Stein said at a press conference outside Trump Tower in New York Monday. "It's clear that the fix was in against a verified vote in the state of Pennsylvania, so we are now moving to a federal court to ask the court to please stand up for our constitutional right to vote."

Stein's claim isn't quite accurate. Although a group of computer scientists determined after the election that there was a serious possibility of votes being manipulated in the three states Stein is targeting, it isn't yet "clear that the fix was in" on election day in Pennsylvania or anywhere else. In any event, it's very unlikely that the recounts will actually overturn the results of the election, even if they do proceed. It would require around 75,000 ballots across three states to be overturned, including 46,000 in Pennsylvania alone. Never in the last 15 years has a statewide recount resulted in more than 1,500 votes being switched, according to FiveThirtyEight.

Stein acknowledged this in her press conference Monday. "Whether it will change the outcome, we don't know, and it would be unfair to raise expectations that the outcome will change. That is not our intent," Stein said. "This is about ensuring that all votes get counted and that voters can trust the system going forward."

The chances that the recounts will deprive Donald Trump of the presidency are slim, but then again, stranger things have happened in 2016. Even if they don't, the mere possibility that votes were manipulated on a wide scale in any state is reason enough to support the recounts, because that's important information for the public to have. Say what you want about Stein and her motives, but she's doing the right thing in pushing so hard for this.