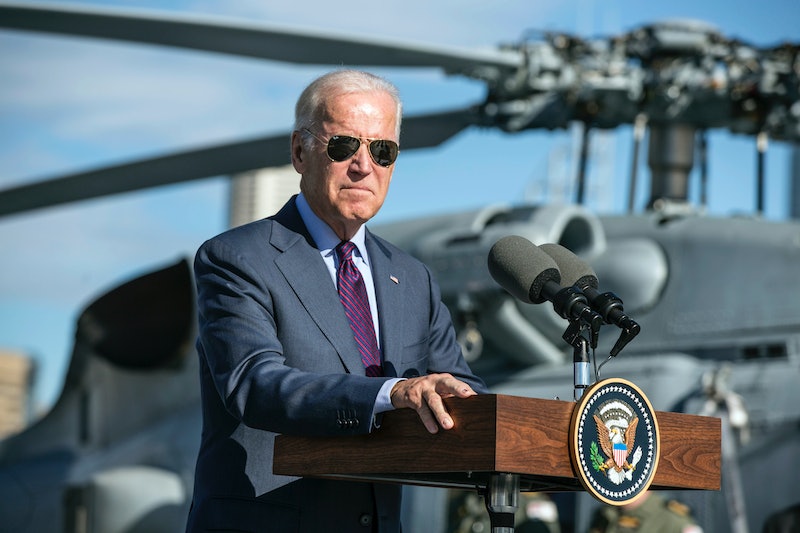 Current Vice President Joe Biden ran for president during the 1988 and 2008 presidential campaigns, but he opted to hold back on running and endorse Hillary Clinton in 2016. Now Biden has announced that he might run for president in 2020, raising the hopes of all loyal fans of the current vice president.

Reporters originally asked Biden if he was going to run for office again, according to The Washington Post, to which Biden replied in the affirmative. When asked which office, the vice president replied, "For president. What the hell, man." Still, Biden pointed out that he wasn't committing either way, since he "learned a long time ago fate has a strange way of intervening," The Post reported.

Biden's announcement was unexpected. The 74-year-old Democrat was widely assumed to be finished with presidential campaigns when he chose not to run in 2016. Biden's decision to not seek the presidency followed the 2015 death of his son Beau Biden from brain cancer at the age of 46. "Nobody has a right, in my view, to seek [the presidency] unless they're willing to give it 110 percent of who they are," he told Stephen Colbert in a 2015 interview. "Sometimes it just overwhelms you," he said, referring to his grief following Beau's death.

If he runs and is elected, Biden would be the oldest elected president, presumably assuming the office at age 78. Biden, who represented Delaware in the Senate for 36 years before becoming vice president, has the experience of two presidential campaigns to draw upon if he does decide to run. And during both of his past campaigns, Biden has definitely absorbed some lessons. Despite his popularity as the cool "Uncle Joe," he's made his own missteps on the campaign trail.

During the 1988 election, Biden was forced to drop out of the presidential race after he had been accused of using parts of a speech by British Labour Party leader Neil Kinnock without complete attribution. In the beginning, Biden credited Kinnock for the speech about humble, working-class origins, but according to Slate, he stopped attributing the speech. (Biden claimed he only didn't credit Kinnock once.)

Biden is also known for his candid, often unfiltered way of speaking — which, depending on who you're speaking to, can be a problem or a solution. In 2007, Biden called then-opponent Barack Obama "the first mainstream African-American who is articulate and bright and clean and a nice-looking guy," CNN reported. Obviously, this statement didn't affect Biden's relationship with Obama enough to prevent him from becoming vice president. And some point out that Biden's propensity for speaking off the cuff is part of what makes the popular vice president appealing to the working class. "Where you look at Joe Biden then or look at Joe Biden now — he's a kid from Scranton," John King, CNN's chief national correspondent, told CNN. "He speaks the language of the bartender or the plumber or the mailman."

Still, if Biden plans on a presidential run in 2020, he's going to have to make sure to learn from his past campaign errors. But Biden's past scandals have been generally forgotten, especially considering his efforts to fight cancer following Beau's death. Biden's remarks about possibly running for president came after a Senate vote without objection to rename a cancer research bill after Beau. If Uncle Joe keeps up the good work, he may well be headed for the title of oldest sitting president.