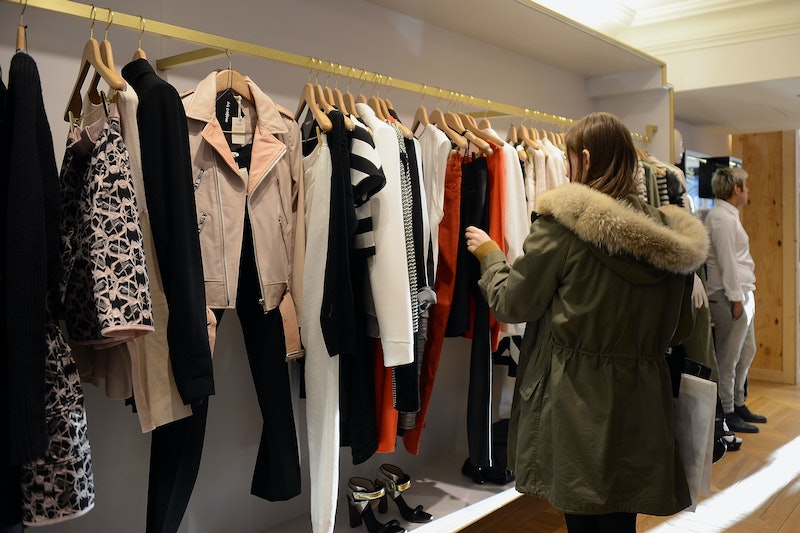 It's one of the oldest stereotypes, but it's also probably one of the most accurate: women love to shop. Well, not all of us love it, but many of us do. Men, on the other hand, don't seem generally all that excited by the activity. There are, of course, some men who enjoy the browsing the racks as much as women (if not more) but many just appear to tolerate it, while some outright can't stand the thought of shopping.

Why do women tend to love shopping so much? And why do men often find it so boring? Here are some theories.

But the fact that women like to shop more than men is not just an empty stereotype — there's actually some scientific data to back it up. Back in 2013, researchers conducted a survey on 2,000 British people and discovered that men get bored with shopping after just 26 minutes. This is exacerbated if they're feeling hungry or if they're shopping with a female partner who can't make her mind up. (We can't imagine why.)

Women, meanwhile, are generally pretty happy shopping for around two hours before they start to get bored or stressed out. We tend to only get fed up when we can't find what we're looking for, when shops become too crowded, or when our other half starts moaning about being bored.

To combat the gender disparity, some German malls actually now have what are known as Männergartens — aka day care centers for men — where they can get a meal, two beers, and an afternoon of games while their lady friends shop. And all for just €10.

Still, none of this answers the question: Why do women tend to love shopping so much? And why do men often find it so boring? Here are some theories.

The answer as to why women tend to love to shop may trace back hundreds of thousands of years ago to early human history. Until around 8000 BCE, we all lived as hunter-gatherers. We women were the "gatherer" half of that dynamic duo. Men would go out and hunt down wild animals, while women would forage for wild fruits, vegetables, berries, nuts, and seeds.

To hold up their end of the deal, men would spot their prey and go in for the kill quickly, getting out as soon as they could so that they could carry back their catch before dark. Remind you of anything? It's a bit like the smash-and-grab technique most men demonstrate today in clothing stores: guys tend to know what they want, zoom in on it, and buy it quickly.

Women, on the other hand, would move from bush to bush, inspecting all of the different berries and fruits to make sure they chose the best ones to take back for their families. It's not too dissimilar to the way we tend to paw every item of clothing in a store before deciding that none of it is "quite right" and moving on to find the item that's the best quality or deal.

Researchers have found that men also tend to prefer shopping by themselves, whereas women — when the time permits — often like to shop with other women. This pattern aligns with the hunter-gatherer theory: Although hunters did sometimes go out together, the activity wasn't a particularly social one, as they had to stay very quiet to avoid frightening off their prospective catch. Women, on the other hand, probably gathered food alongside other women from their tribe, and had a nice chat at the same time. Much as we do today when flicking through the racks.

But there is another theory as to why women love to shop so much, and it's based on much more recent history. Polly Young-Eisendrath, professor of psychiatry and psychology at the University of Vermont, puts forward the theory that today's method of shopping is simply an offshoot of advertising and commercialism that was created by corporations to encourage women to feel in charge.

This phenomenon began in the late Victorian era, well before women even had the right to vote. The advent of women shopping in stores gave the marginalized gender a chance to participate in a significant economic activity; a realm that had previously been reserved just for men.

Shoppers were encouraged to come to the stores for pleasure, conversation, and to avail themselves of a range of new, ready-made garments. But it wasn't just to "buy things;" they were encouraged to "make their own choices." Attendants brought a variety of attractive offerings into a sitting-room environment (where shoppers were having tea and refreshments) for women to review. For the first time, the American woman was being asked directly what she wanted! She was being encouraged to become the Subject of her own Desire (instead of the Object of Desire, the muse). And so, well before upper and middle class women had won the right to vote, they were allowed to practice individual freedom in department stores and told they could shop for what they wanted.

As commercialism grew and grew, advertisers continued to tell women that shopping was a liberating way to act on one's own desires and control one's destiny. (Yeah, because that always works.) The phenomenon is depressing in retrospect, but you've got to admit it is something of a power-trip when you hand over your credit card at the cash register. It feels fantastic to be able to buy yourself what you want, when you want it (even if the power we feel is but a problematic illusion).

So whether you subscribe to the theory that shopping preferences are all in the genes or believe they are simply socially conditioned, there does seem to be a significant difference between male and female attitudes towards shopping. Still, if shopping has taught us anything, it's that labels can be misleading.

More like this
The 7 Best Undershirts for Women
By Elizabeth Enochs
15 Dreamy Perfume Gift Sets For Every Fragrance Lover On Your List
By Shea Simmons and Olivia Rose Ferreiro
The 12 Best November 2022 Beauty Launches, According To Our Editors
By Rachel Lapidos
20 Beauty Gifts Under $25 That Make Perfect Stocking Stuffers
By Jordan Murray and Audrey Noble
Get Even More From Bustle — Sign Up For The Newsletter