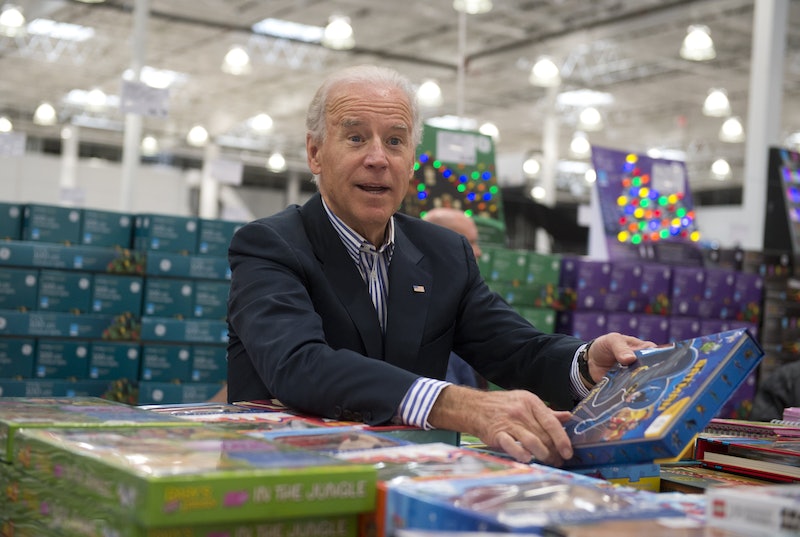 There was big news on Capitol Hill Monday when Joe Biden let it slip that he might run in 2020 for president of the United States. He was leaving the Senate when he remarked to a reporter how much he loved the institution. To which the reporter asked, "Are you going to run again?" Biden bluntly said he would run in 2020 "for president, and also, what the hell man, anyway." That sure is the candid Biden we know and love. And if it's true, that means Christmas. These seven reasons are this is Biden's holiday gift to you.

Now, there's always the chance he's joking. It is Biden, after all. But it sure didn't sound like it. The reporter even asked him point blank if he was serious: "Just to be clear, were you kidding?" And the answer seems to clearly be "no." Biden then elaborated: "I’m not committing not to run,” he said. “I’m not committing to anything. I learned a long time ago, fate has a strange way of intervening.” That comment might refer to his most recent near-run. After losing his Party's nomination in 1988 and 2008, he almost put his hat in for 2016, but didn't after the death of his son, Beau. But 2020 may be the time, so happy early holidays.

With Biden on the campaign trail and eventually in the White House, these amazing Biden memes can continue.

2) You Can Already Get A T-Shirt

Biden had a very difficult time recovering from his son's death. If he's considering running for higher office, it must mean he's back on his feet somewhat. Back in January, the VP acknowledged that he regretted not running every day — and so this could be his chance.

4) Donald Trump's A Bunch Of Malarkey

If anything has been proven since the election, it's that President-elect Donald Trump is even less presidential than it seemed during the campaign. The news that Biden might soon call him out on his tweets, which are a tad trumped up, is music to your ears. Biden will literally get a malarkey button to push every time Trump spews BS.

Whatever Dem runs next will have to help half the country get over Hillary Clinton's loss. It's good to know that Joe gets how badass she is too — and has been saying so as far back as 2008. He said in a rally then that she was even more qualified than he was to be VP.

6) Get To Hear More About Scranton

It's just the beginning of Scranton talk. Be prepared to hear about what it was like growing up there for at least four years.

Obama and Biden's bromance recently saw a run for its money in the Obama/Trudeau match-up. If Biden were to win, this could truly bring things full circle and allow for a Trudeau/Biden bromance extraordinaire — even if it turns into a messy bro-love triangle.

So happy holidays from Joe to you, and may your days be merry and bright — at least, until Inauguration Day.