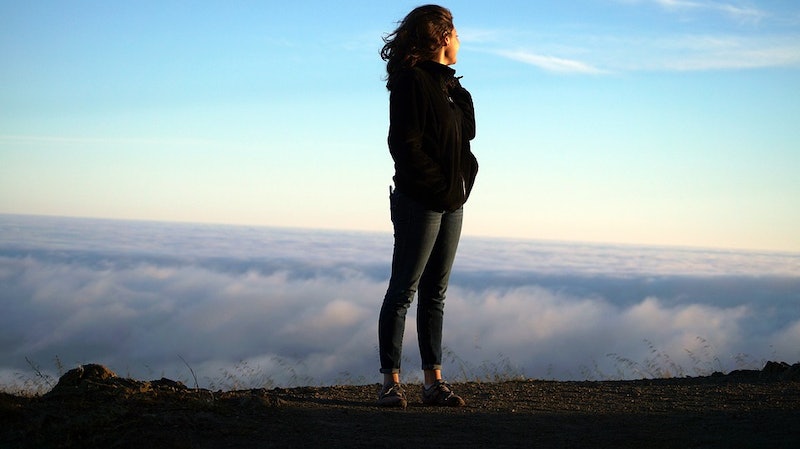 There's one story that's going to dominate the "female first" assessments of 2016: It was, of course, the first year ever in which a woman became a major party nominee for the president of the United States. (Still love you, Hillary.) But elsewhere, both in American politics and across the world, women have been making inroads, building new achievements, setting world records, and generally being badasses. It's been an intriguing year to be a woman, to say the least; but there are a copious amount of excellent role models out there blasting into space, breaking barriers in music, challenging hatred, and occupying previously male-only jobs with aplomb. It's enough to make you hug your uterus with pride.

Female barrier-breakers are increasingly everywhere, from education to science to sport to politics; it can feel, on first glance, as if there's nowhere that remains closed to female achievement and grind if only we try hard enough. But the fact that it's 2016 and we're celebrating the first ever female Librarian of Congress, or the first break-out Afghani female rapper (who keeps going despite several near-death experiences), indicates just how far we still have to go — and how far we've come.

In many cases, these shouldn't be firsts; these should be normal. And the women who are making the first step are the ones who begin that process. All hail the female history-makers of 2016.

Become The First Latina, Somali, And Indian-American Women In Congress

It was the part of the election results that didn't suck: the women elected to positions of political power breaking barriers for minorities across the nation. Kamala Harris, pictured above, became the first Indian-American woman to enter Congress with her win in California (she's the daughter of Indian and Jamaican immigrants), while Catherine Cortez Masto won over Nevada to become the United States' first-ever Latina senator, a ridiculous situation considering that it's 2016 and not, you know, 1902. Elsewhere, Ilhan Omar made history by becoming the first Somali-American woman elected to sit in a political seat in the United States, working in Minnesota's House of Representatives.

Win The Evian Championships At 22 With A World Record

Follow golf? No? Maybe you should, because a young woman is currently causing massive uproar with her record-breaking scores on the golf course. In Gee Chun created a furor in September when she won the prestigious Evian Championship with a score that's never been bettered at any 72-hole major golf championship. By anybody. Ever. Did I mention she's only 22? And that she only became a full-time golf pro early in 2016? Insane.

The situation for adult Saudi Arabian women remains, in many senses, dire: As the Human Rights Watch points out, they're still under the male guardianship system, in which they remain under the power of their male guardians for their entire lives and cannot travel, work, or do anything powerful with their lives without a man's explicit say-so. But the country took an important step forward this year with the establishment of its first ever-domestic violence center, which was flooded with 1,890 calls in the first three days of its opening. Domestic violence is unsurprisingly an issue in a country with such pervasive gender inequality, and hopefully new resources will help more women escape and protect their own safety and that of their children.

Female travelers have existed for an extremely long time, but Cassie DePecol will soon become a new benchmark for the idea of globetrotting: The 27-year-old American is expected to set the new record for visiting all 196 countries worldwide, in an under-2-year span. It seems frenetic, but DePecol is breaking a lot of barriers considering that we still live in a world where women in some countries can't leave or obtain a passport without the permission of a male guardian.

Be Elected To Lead Taiwan And Estonia

While the number of total female heads of state worldwide isn't at a record level this year (that was in 2014), several massive steps forward have been taken this year, notably in Taiwan, where Tsai Ing-wen has been elected as the first female president, and Estonia, where Kersti Kaljulaid is both the first female head of state and the youngest ever to hold the office. Angela Merkel, meanwhile, remains the most powerful woman in the world and one of the most powerful people overall in her position as chancellor of Germany.

There is basically nothing not awesome about this: 2016 marks the first year in the entire history of the seminal Library of Congress, one of the most important collections of documents in both American and world history, that its head librarian has been a woman. The woman herself, Carla Hayden, was nominated by President Obama, and as the 14th Librarian of Congress, she holds another special place: She's also the first African-American to ever take the post. In some parts of American politics, at least, the stranglehold of white men has been dealt a critical blow.

Make Up Nearly Half Of Carnegie Mellon's Computer Science Course

When it comes to women in STEM (science, technology, engineering, and mathematics), sometimes the statistics can seem dire. However, this year, an important milestone was reached: For the first time in history, the prestigious computer science course run by Carnegie Mellon achieved near gender parity in its new intake, with 48.5 percent of the 2016 class being female. The program also reported a 38 percent rise in the number of women who applied to the program at all, which shows that girls at least haven't learned to be discouraged.

Burst Out As The First Afghani Female Rapper

It's been a good year for women in music: Adele, Rihanna, Lemonade, Pussy Riot, and all manner of awesome has erupted across the world. But Paradise Sorouri, Afghanistan's first prominent female rapper, made 2016 her year to break through in the West, after a life punctuated by severe violence, personal trauma (her young cousins burned themselves alive rather than become child brides), and the experience of becoming an exile from her own country for her personal safety. It's been an amazing few years for Afghani boundary-breakers, too; in 2015, several women were the first female Afghanis to compete in an ultra marathon.

It was one of the best cases of the power of female protest in recent history: Women in Poland went on strike in October to protest against a terrifying proposed abortion law that would effectively outlaw abortion except in cases of rape, incest, or threats to the life of the fetus or mother, and punish any woman who got one with up to five years in prison. Polish women were not having this nonsense, and an estimated 6 million boycotted work and showed up to protest across the country, with 30,000 marching through Warsaw alone. The result? Politicians backed away from the entire idea. Women making their voices heard, 2016.

More like this
5 Ways To Stand In Solidarity With Women In America From The UK
By Sophie McEvoy
How To Fight For Reproductive Rights, Based On How Much Time You Have
By Courtney Young
Why You're Seeing Green Bandanas At Abortion Rights Protests
By Lexi Inks
53 Extremely Useful Things People Call Their Most Amazing Finds Of The Year
By Rebecca Martinson
Get Even More From Bustle — Sign Up For The Newsletter