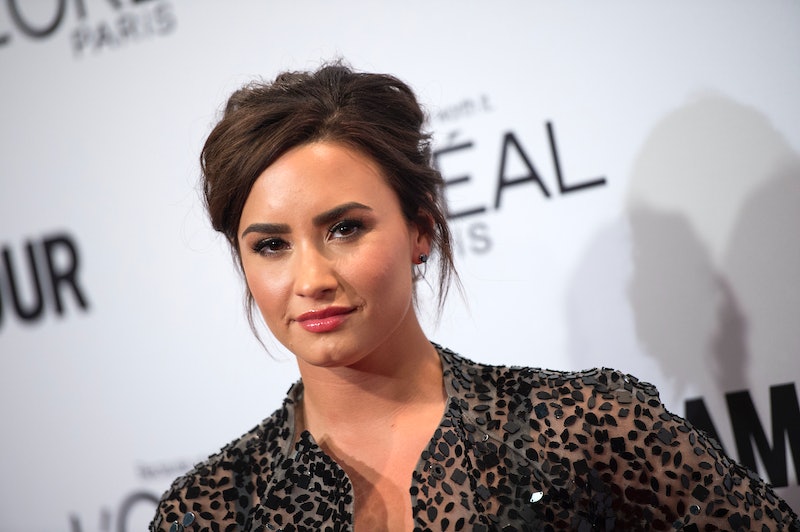 Demi Lovato can be a pretty polarizing figure sometimes, but what she is above all else is a role model. She is a woman who works very hard to produce the amazing music that she produces, that advocates for many causes, and that has a devoted and loyal fan base of which I am a frequent member. So the fact that Lovato was nominated for a 2017 Grammy feels like it was a long time in coming, considering how feminist and sex-positive her music is. However, it also feels like it was a long time in coming because Lovato tweeted about being nominated for a Grammy one day all the way back in February 2015. She set a goal for herself, and she achieved it over a year later. No big deal.

The tweet came two months after the 2015 Grammy nominations were announced, and the same day that the 2015 ceremony took place. In it, Lovato sounded so determined that we as fans honestly believed that she could do anything with that kind of attitude. Granted, we already believed that, especially if you'd been listening to her music as far back as Don't Forget, like I have. But her confidence inspired confidence in all of us.

And it damn well should have, because now, she has a Grammy nomination for Best Pop Vocal Album. Sure, she's going up against big hitters like Ariana Grande (Dangerous Woman), Adele (25), Justin Bieber (Purpose), and Sia (This Is Acting). And, sure, we can all probably guess by now that Adele is going to take this category home. However, just the fact that her hard work on Confident has been recognized, let alone that it's recognized in the same breath as so many frequent Grammys faces, is a really huge deal. When Lovato sets out to get something done, she really knocks it out of the park.

Even better, it's for an album that genuinely deserves it. I'm not saying that all of Lovato's albums don't deserve to be recognized for their artistry, but she really went above and beyond in pulling together Confident. Between the sex positive anthem "Cool For The Summer" and the titular track "Confident," she really spoke to empowerment for women everywhere. She told us that it was OK to be ourselves and, in fact, that our selves are the best selves that we could possibly be. That we could want what we want, and feel how we feel, and our emotions and desires are valid. What's wrong with being confident, indeed.

Basically, it's a great day to be a Lovato fan, and I couldn't be more proud of the singer. She deserved this Grammys nomination, just like she deserves every good thing in the world. Now, excuse me while I listen to Confident for the the umpteenth time. It's a Grammy-nominated album, don't you know.

More like this
Adele’s All-Female Lineup Includes Kacey Musgraves, Mahalia, & Self Esteem
By Shahed Ezaydi
You Might Want To Rewatch 'Elvis' For This Britney Spears Easter Egg
By Grace Wehniainen
Sadie Sink Would Escape Vecna From 'Stranger Things' With This Taylor Swift Song
By Grace Wehniainen
Zooey Deschanel Can't Be Anyone But Herself
By Samantha Leach
Get Even More From Bustle — Sign Up For The Newsletter