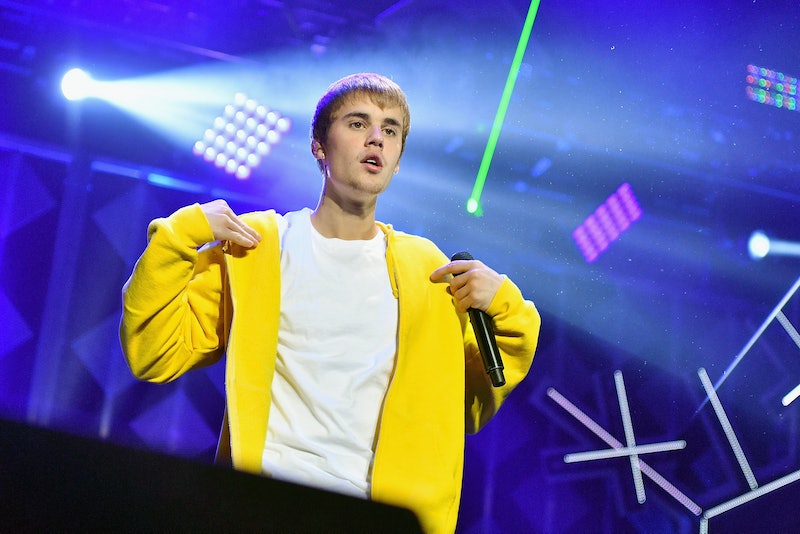 There are some fandoms that are unparalleled in their devotion to their favorite star and Justin Bieber's is one of them. So, it no surprise that, after he got four Grammy nominations, Justin Bieber's fans celebrated big on Twitter. The singer garnered nods for Song of the Year ("Love Yourself"), Album of the Year (Purpose), Best Pop Solo Performance ("Love Yourself"), and Best Pop Vocal Album (Purpose). If it feels like that album came out forever ago, it did. Bieber launched it in November 2015, but that's within the 2017 Grammy nominations timeline — so he was good to go, and fans were grateful.

And, what better a place to celebrate your fave's success than on social media with fellow fans? The Beliebers came out in full force on Tuesday morning to celebrate the star's high amount of nominations (and all in major, major categories). Bieber's had a lot of ups and downs in his life, but he seems to be on top right now and his fans — who, honestly, have really been there the whole time — are happy to see him doing so well.

Check out some of their congratulatory messages below:

Those Who Are So Proud

He has some of the most supportive fans around.

Those Who Are All Caps Excited

If your caps lock isn't on, what's the point of celebrating?

And Those Who Know He Deserved It All Along

Say what you will about The Biebs, but Purpose was a great album and those nominations were well-deserved. Will he pick up any wins when the ceremony airs? We'll have to tune in to find out. But, as many of his fans have pointed out, four nominations is pretty much a win in and of itself — Bieber should be as proud as his fans are.