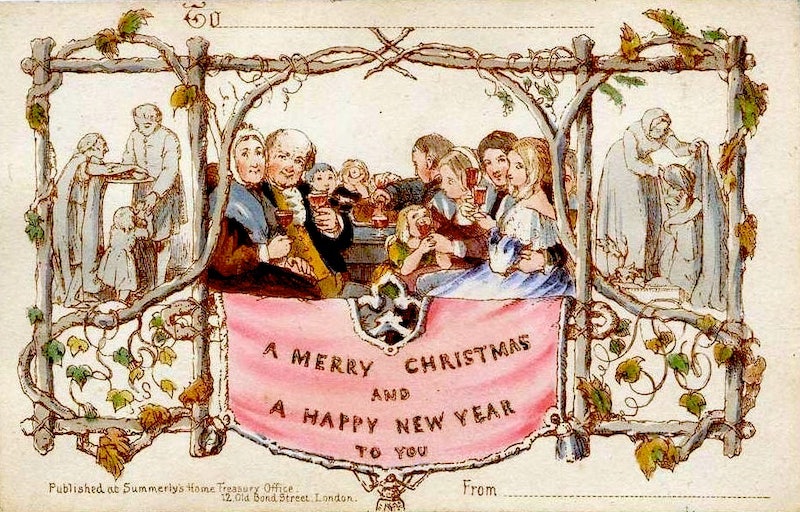 Riddle me this: We send them every year, often with little thought to their origins; they're a type of present, but we don't wrap them; what am I? I'm talking about Christmas cards, of course. But when did the first Christmas cards appear? They're such a seasonal staple that we usually don't think about why we use them — but maybe we should. I for one wanted like to know a little more about this age old holiday practice, so I did some digging to find out. It's the season of good will and all that, so gather 'round and I'll share what I found.

According to the BBC, the tradition of sending Christmas cards was borne of influential entrepreneur Sir Henry Cole in England in 1843 (the Victorian era, for those keeping track). Christmas history and tradition website Why Christmas goes into a little more detail: Cole worked in the UK's Post Office when it was known as the Public Record Office — a time when it wasn't typically accessible to the average Joe. While there, Cole actually helped make the postal system more accessible by assisting in introducing the "Penny Post" in 1840, where cards and letters could be sent around the country with the help of a stamp costing just one penny. Cole then linked up with artist John Callcott Horsley and the two designed the first ever set of Christmas cards in 1843, selling them for a shilling apiece. According to Britannica, these cards depicted three separate panels: The center showed a family feasting, while the outer two showed scenes of charity.

In the United States, lithographer and publisher Louis Prang is frequently credited as being the "father of the American Christmas card." According to the New York Historical Society, Prang was born in Breslau in what is now Poland in 1824; he later emigrated to the United States and set up shop in Boston in 1850. After returning to Europe to study new techniques in Germany in 1864, he developed "chromolithography," a process which allowed for colorful printing — and in 1875, he used the technique to begin printing Christmas cards in America. He was printing five million cards a year by the early 1880s.

For a while though, professionally printed cards at Christmas remained somewhat expensive in America. Homemade cards made with foil and ribbon grew in popularity on both sides of the pond in the 1910s and early 1920s, but were often too delicate to be mailed, writes Why Christmas. It wasn't until Joyce C. Hall and his brother started Hallmark Cards in 1923 that the practice became more affordable for people in the United States and, eventually, worldwide.

Today, card manufacturer Moo reports that the United States sells more Christmas cards than the UK; in 2010, the numbers topped out at 1.5 billion in the United States, compared to 678.9 million in the UK. This is probably down to the fact the States are a significantly larger country — although it could be a slight indicator of popularity too: Hallmark products are sold in 40,000 retail stores in the United States, today after all. However, the the Greeting Card Association notes that in the UK, around 900 million actual hand-held Christmas cards worth £200 million were sold in 2015, so it looks like we're catching up.

Oh, and there's also this: In 2001, one of the original Christmas card prints designed by John Hallcott Horsley and sent by Henry Cole himself (to his grandmother — he signed it and everything) sold at auction for a record-breaking £22,500 (about $28,000). Talking about an expensive card!